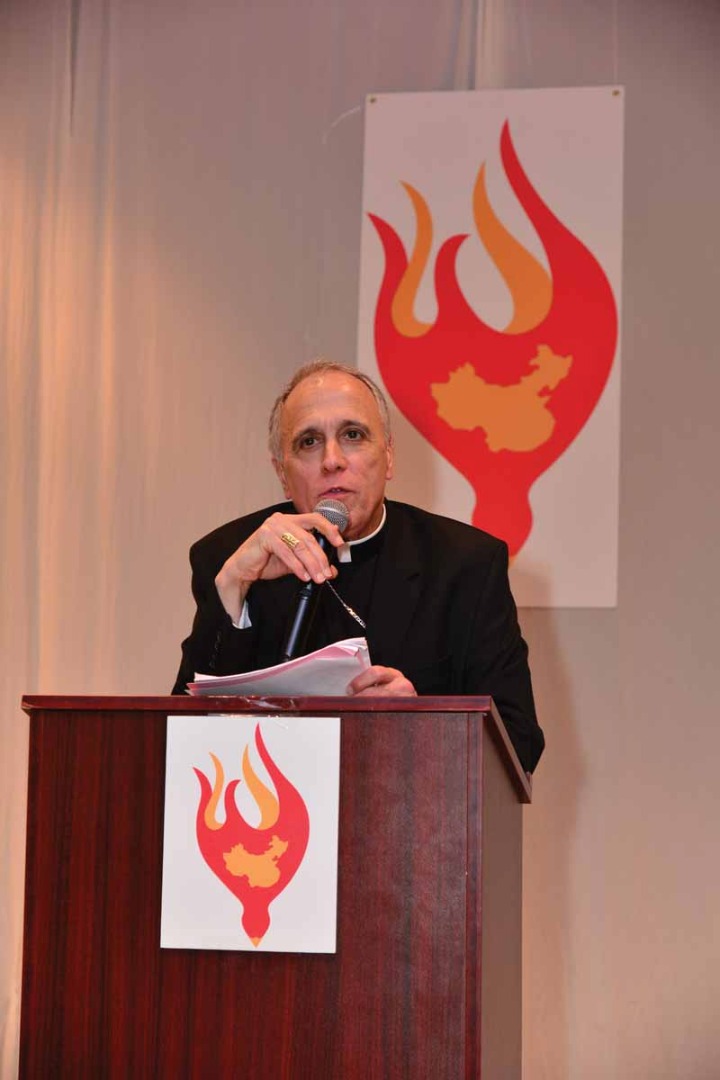 Daniel Cardinal DiNardo speaks after receiving the Our Lady of China Award for his efforts supporting the Catholic Church in China April 19. Photo by Patrick Leung.

HOUSTON — Daniel Cardinal DiNardo and Auxiliary Bishop George A. Sheltz joined 500 others in solidarity with the Catholic Church in China. The April 19 benefit dinner sought to raise funds for the formation of Chinese priests and improve awareness for the situation in the Church in China.

Chaired by Father Donald Nesti, CSSp, the fund aims to bring Chinese priests and sisters to Houston for graduate study so they can return home to better evangelize. Father Yifu Lyu, its first student brought from China, is in his first year pursuing an masters of arts in Faith and Culture at the Reverend Donald Nesti Center for Faith and Culture in the University of St. Thomas in Houston.

“Through our donation we live out our faith and share our blessings to the people of China in the hope for a bright future of the Church there,” Honorary Chair Theresa Chang said.

As the presiding judge of Harris County Civil Court, Chang has been involved in more than 20 civic and professional organizations and holds titles in a half dozen.

“This is a noble cause worth supporting,” Dr. Peter Chang said, a cardiologist and the husband of Chang. “In this extremely turbulent world, religion is one of the few places whether Democrats or Republicans, Chinese or American, can get a sense of unity because we are all children of God.”

Following a talk given by Father Leon Strieder on Jesuit Father Matteo Ricci (1552-1610) and his groundbreaking missionary work in China, Cardinal DiNardo was presented with the 2017 Our Lady of China Award.

“An outstanding leader, he stands in the forefront to welcome the stranger in Houston, the most racially, ethnically and religiously city in the U.S.,” Father Nesti said. “He emphasizes the need for new evangelization and collaboration with the Church on other continents in evangelization. He extends welcome to Father Yifu and the support for the work of the Spiritan China Education Fund, specifically through the room and board at St. Mary’s Seminary.”

Holding the statue of Our Lady brought from Sheshan, Shanghai, where local devotions say she protected the town’s Christians, Cardinal DiNardo accepted the award.

“With the Holy Spirit helping us engage with other cultures, this really strikes me with the background of the Spirtian China Education Fund,” Cardinal DiNardo said. “Look at the statue — she is offering the Christ to the world. It’s a beautiful image of Virgin Mary.”

Cardinal DiNardo recalled when he worked in Rome in the 1980s when then-pope St. John Paul II shared an intense wish to visit China.

“He quietly sent a number of Jesuits to China. The work of the fund is exactly what he would like to see — the ongoing dialogue and encounter with China,” he said. “You set a perfect example of what we can do right now. I am grateful for the fund and donors. If there is one thing that Chinese Catholicism needs now is formation. Yes, the fund is small, but it’s the beginning of encounter and dialogue... one day we will appreciate the crucial work this fund carries out.”

While the fund is paving the way to sponsor the second Chinese priest, the second China Church Forum is set for Sept. 15 and 16. This major educational event convenes China experts across the country, including Chinese priests and sisters studying in the U.S., who will talk about the historical and contemporary issues of the Church in China and her interaction with the West.

“This is a unique opportunity for Catholics in Houston to transcend their parochial life and sacrifice one day in a year to hear the faith of their brothers and sisters in China,” Forum Director Luke Liu said. “Getting educated and inspired is a way of prayer and a way to cherish the freedom often taken for granted.”