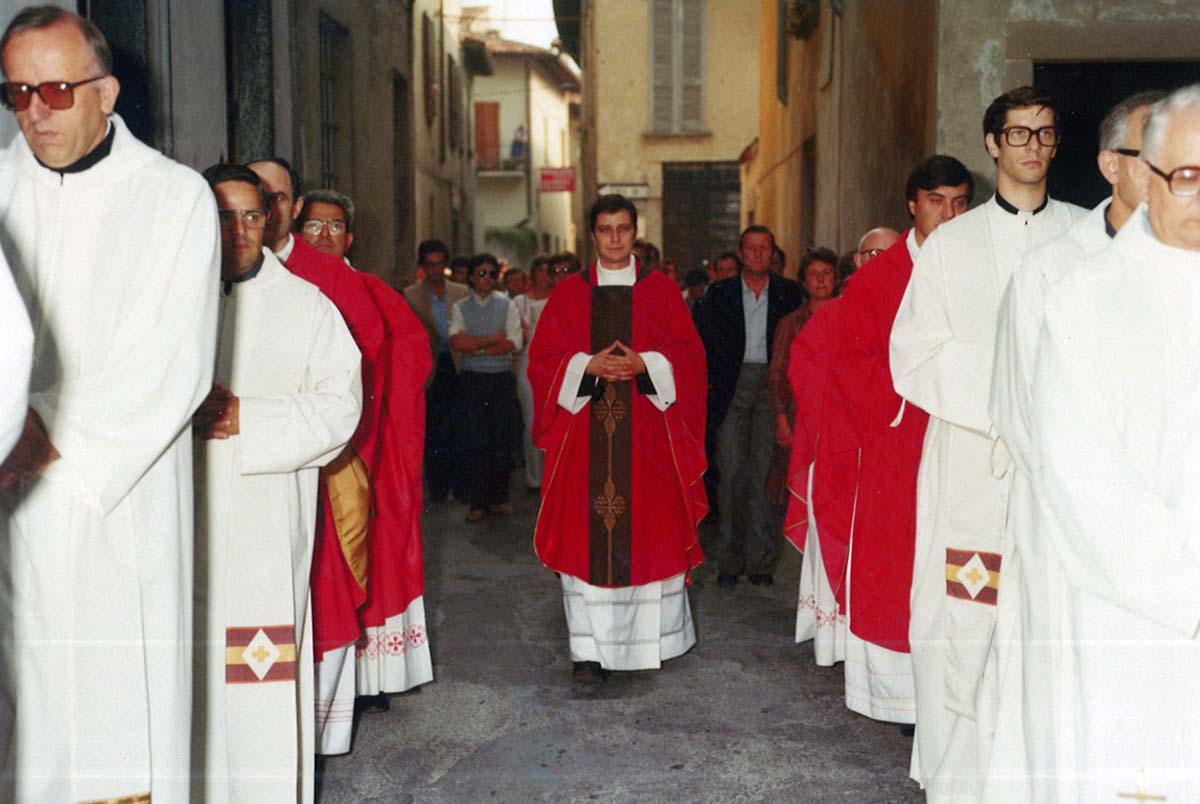 HOUSTON — When Somascan priests Father Italo Dell’Oro and Father Julian Gerosa flew together on the same flight from Italy to the United States in September of 1985, they wondered what awaited them both.

“Because of our previous work with youth in Italy, we were assigned together to Pine Haven Boys Center in New Hampshire, a residential treatment center for kids who had already experienced, in their short life, family and behavior problems,” Father Gerosa recalled recently.

But first, the two young priests had to go through the toils of learning English, earning a degree in order to work at the center, adjusting to a new culture and style of life and work, “like any immigrant,” Father Gerosa said.

“From religious brothers, we became friends. We spent our free time, because we could not work yet in the beginning, exploring New Hampshire, its mountains, lakes and forests. When we started working at the center, we shared the challenges, difficulties, successes, and disappointments in ministering to those abused, abandoned or institutionalized,” he remembered.

Now Father Gerosa, the local superior of the community of Somascan priests who staff Christ the King and Assumption Catholic Churches as their missions, praises the Vatican’s decision to promote Father Dell’Oro to bishop-elect with ordination on July 2.

“It is an honor for the Somascans to have one of their religious to be chosen to be a bishop. It is a clear acknowledgment of the good work the Somascans have done and continue to do for the Church in Houston, and, in particular, a deserved appreciation for the service Father Italo has continuously and personally provided to the Archdiocese in his offices of Ministry to Priests and Vicar for Clergy,” Father Gerosa said.

But the decision is also bittersweet, he shared.

“There is, however, a painful observation we have to make. The Somascans are losing a valuable, faithful and resourceful member, and I am going to miss his companionship after having sailed together in the U.S.A. for almost 30 years, most of which were in choppy waters,” Father Gerosa admited.

Then in 1992, their roads separated, and Father Dell’Oro was assigned to work at Assumption Church in Houston, while Father Gerosa stayed at Pine Haven.

“We kept in touch through meetings and visits. When I would come to Houston, he was eager to show all the aspects of his pastoral work. He was very happy to be working in a parish. His concern was to build up a community where Hispanics and Anglos could grow together in their faith and cooperate in harmony in the numerous activities of the parish,” he said.

Another Somascan priest, Father Albert Zanatta, now pastor at Assumption Catholic Church off Airline Dr., also worked with Father Dell’Oro both in New Hampshire and in Houston. He agreed that the decision is a double-edged sword for the order.

“There are only a few of us (Somascans) here, and now one is gone practically speaking with six Somascans at two different parishes. But it’s good for the Church, and I know he’s very happy,” Father Zanatta said of the bishop-elect.

“When Father Dell’Oro became Minister to Priests and Vicar for Clergy in the Archdiocese, his true leadership role and listening ear became major pluses,” said Father Zanatta.
“You can count on him. He spent time with priests and made time for them, not just telling them what to do,” Father Zanatta said. “He’s a very pastoral person.”

Father Gerosa said his destiny with Father Dell’Oro came together again in 2001.

“At the newly assigned parish of Christ the King, the Somascans wanted to start a vocational formation program. Father Italo was appointed vocations director, and I was the formator. As a team, we worked and lived together for several years. Father Italo was the right person for that ministry that he designed and carried out tirelessly,” he said.

When he became Minister to Priests and Vicar for Clergy in the Archdiocese, Father Dell’Oro’s “journey started to show the dawn of what became a reality recently: new Auxiliary Bishop of the Archdiocese. He always loved his work with priests and the Archdiocese,” Father Gerosa said.

“I can say that becoming bishop was the inevitable development of his work, his acquired experience and professionalism, and aspiration, not in the sense of a career, but as a natural blossoming of a ministry well done that was recognized as a service to the priests and the people of the Archdiocese,” Father Gerosa acknowledged.

Origins of Somascan Fathers began in Italy and now worldwide

Bishop-Elect Italo Dell’Oro, C.R.S., of the Archdiocese of Galveston-Houston is a member of the Somascan Fathers, which started in Italy and now have missions here in Houston and worldwide.

The Somascan Fathers, officially recognized as Clerics Regular of Somasca (C.R.S.) in 1568, continue the legacy of St. Jerome Emiliani in serving the poor and taking care of orphans and abandoned youth.

Following the example of Jesus and His disciples, members live in community sharing everything in common; they persevere united in prayer and work, strive for the perfection of charity in humility of heart, meekness and benignity, loving poverty and work, with the most ardent desire to attract and unite all people to God.

With the same intense love of its founder, the congregation continues to devote itself to the material and spiritual care of orphans and the poor, undertaking the human and Christian education of youth and pastoral ministry.

The “Company of the Servants of the Poor” was founded in 1534 when Jerome Emiliani called together his collaborators and companions for a general assembly. In 1928, Pope Pius XI proclaimed him the Universal Patron of Orphans and Abandoned Youth.