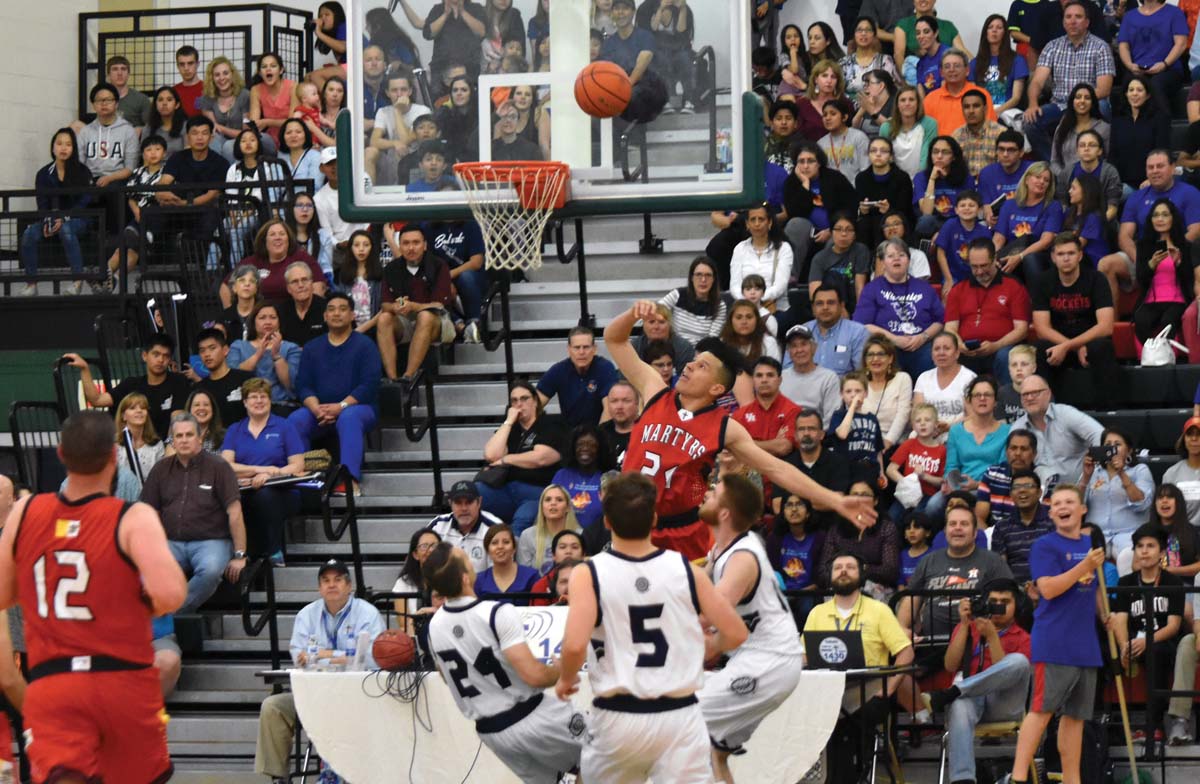 Father Preston Quintela, parochial vicar at St. Elizabeth Ann Seton Catholic Church, goes up for a rebound during the 2018 Priests vs. Seminarians basketball game. The seminarians will take on the priests a third time at Strake Jesuit Gym March 23. File photo by Catherine Viola/Herald.

Tickets are now sold out. The game will be streamed live online at www.houstonvocations.com

HOUSTON — With the rough-and-tumble Priests vs. Seminarians Basketball game having the collars win the past two years, the younger guys in training may be out for blood this year, said organizers of the March 23 event.

A fast-paced game last year with plenty of cheering and groaning ensured standing room only as soon as the free tickets were released. So this year, the tickets are being sold for $5 for adult tickets and $3 for a child ticket (12 years and younger), which will make the seminarians winners either way.

All proceeds will go to assist seminarians through the care of the Archdiocese’s Office of Vocations and St. Mary’s Seminary. At press time, more than 2,300 tickets had been sold with less than 100 remaining for the game at Strake Jesuit Gym, located at 8900 Bellaire Blvd.

The event will likely be sold out once again, said Director of Vocations Father Richard McNeillie, who is not on the roster to play.

Father Preston Quintela, parochial vicar at St. Elizabeth Ann Seton Catholic Church, said he is excited to play again along with Father T.J. Dolce, pastor at St. Martha Catholic Church in Kingwood. But perhaps a bit of a family feud may transpire with Father Nicolas Ramirez, now administrator with St. Frances Cabrini, going head-to-head with his brother Jacob, a seminarian at St. Mary’s. Both are nephews of Coadjutor Bishop Oscar Cantú of San Jose, California.

Father Quintela chuckled and said, “Yes, the seminarians are very hungry. Our strategy for the priests is ‘don’t get hurt.’”

“This should be a competitive, athletic and fun game,” he added. “But our focus is truly vocations. We want to show young men and women that they can answer God’s calling to consecrated life and be joyful and happy in all parts of their lives.”

Even if the game is sold out, there are plans to again livestream the game with play-by-play announcers.