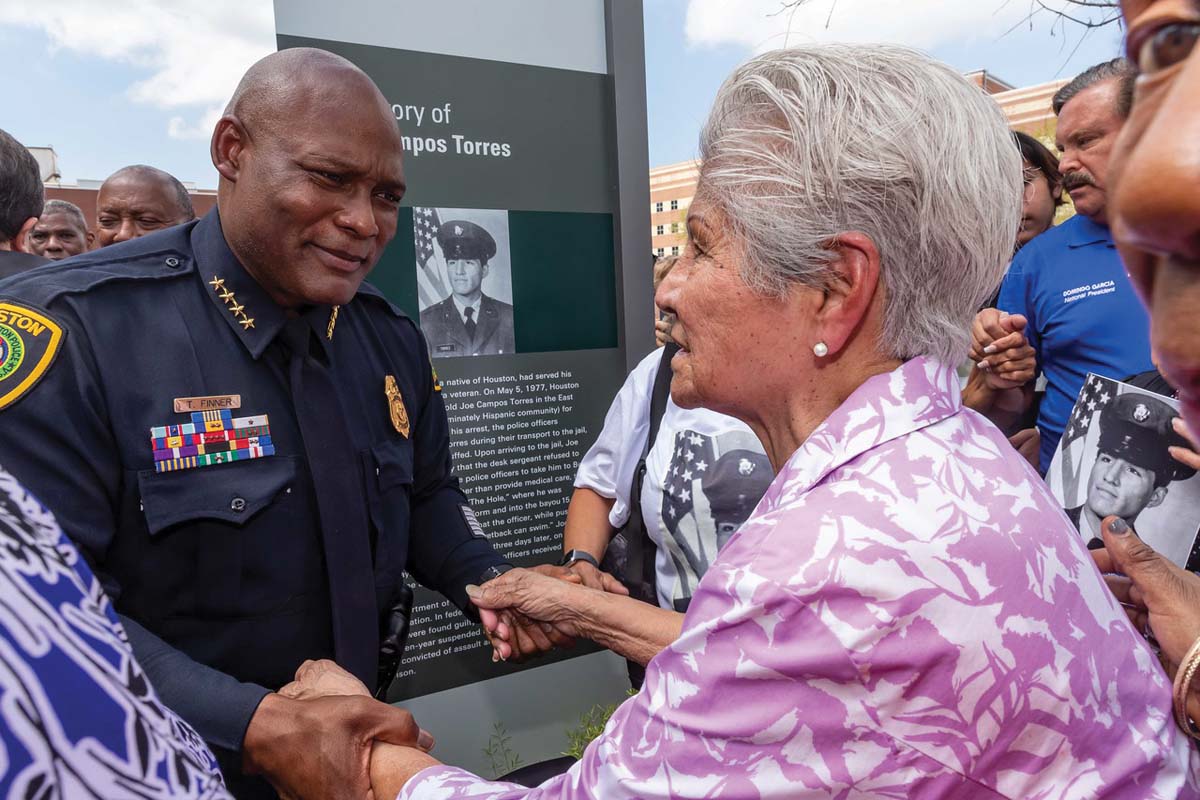 Houston Police Chief Troy Finner comforts Margarita Campos Torres, the mother of 23-year-old Jose Campos Torres killed by police in 1977, as they stand in front of a trail at 1301 Commerce with an Army photo of her son dedicated in his honor April 2 in downtown Houston. (Photos courtesy of the City of Houston)

HOUSTON — A crowd of Houston community leaders and family of a Vietnam War veteran, severely beaten and drowned after being thrown into Buffalo Bayou by Houston police in 1977, gathered recently on the banks of the bayou to honor the memory of Jose “Joe” Campos Torres.

The April 2 public ceremony dedicating a Memorial Plaza and trail near the University of Houston Downtown, now named after the former U.S. Army soldier, was a far cry from the night of May 5, 1977. That’s when six Houston police officers arrived to arrest the 23-year-old for disorderly conduct at an East End bar, its court case revealed.

Instead of taking him directly to jail, the officers took Torres to “The Hole.” A concrete platform below street level, The Hole dropped 20 feet down into the bayou along a darkened area on the edge of downtown near Austin and Commerce streets. Most of the officers, except for a young rookie, took turns beating the handcuffed prisoner, according to testimony.

When they finally did take Torres to jail, that’s when the arresting officers were told by the jail booking desk to take the Mexican-American to the hospital because of his extensive injuries from being beaten.
Court evidence showed the officers instead returned him to “The Hole.” Then Torres, wearing fatigue pants and combat boots, was pushed down into the murky waters. His body was found by a boat operator floating in Buffalo Bayou three days later, on Mother’s Day, identifying Torres by the military dog tags still hanging around his neck.

Father Miguel Solorzano, Archdiocesan priest, opened the public dedication by praying, “We cannot change this dark chapter of Houston’s history, but we can learn from it and reshape the future.”

“We grieve with those suffering because of racism, injustice and police brutality. May God’s divine mercy give them comfort. We also pray for law enforcement who serve and protect our community,” Father Solorzano said.

Among Torres family members present at the dedication, his mother, Margarita Campos Torres, now 87 years old and using a walker, in an interview with the Houston Chronicle, said her son “lives in my heart.” Speaking about the policemen convicted of killing her son, she said, “God gave me the grace to forgive them. I just pray that they will repent. I can hate no more.”

His death triggered an outcry from the Mexican-American community about police brutality in Houston, especially after the case was moved to Huntsville and tried before an all-white jury. The jurors in October 1977 convicted two of the officers of negligent homicide, downgraded from a felony murder charge.

The officers on trial, Stephen Orlando, 21 years old, and Terry Denson, 23, admitted that they beat Torres while he was handcuffed, but both denied throwing him into the bayou where he drowned. The officers were sentenced to one year of probation and were fined one dollar for the crime.

One year after the murder, on May 7, 1978, in what has become known as the Moody Park riots, violence broke out after police showed up to a Cinco de Mayo celebration in the Near Northside barrio where residents were chanting “Justice for Joe Campos Torres.”

Sylvia Garcia, attending the April 2 dedication, remembered protesting the case as a young activist. Now she is a U.S. congresswoman. Adrian Garcia, also attending the recent public commemoration as a Harris County commissioner and former sheriff, said after witnessing the Moody Park riot, he was motivated to join the Houston police force that started his long law enforcement career.

The U.S. Justice Department in 1978 charged three of the officers — Denson, Orlando and Joseph Janish, all in their 20s — with civil rights violations of their prisoner. They served nine months in federal prison.
During an emotional moment in the dedication ceremony, the crowd of roughly 1,000 stood and chanted “I am Campos Torres.”

Isidro Garza Jr. and Johnny Mata, both longtime civil rights advocates, have met with the Torres family throughout the years and followed up on Commissioner Garcia’s suggestion for the League of United Latin American Citizens to spearhead transforming an unkempt lot into a memorial. The family had held “Walk for Justice” marches there throughout the years.

Garza said, “All honor and glory for the memorial belongs to our Heavenly Father, through the intervention of His Blessed Mother Nuestra Virgen de Guadalupe. She cast her eyes on our community that has been suffering for too long. She knows of a mother’s loss firsthand.”

He also thanked Mayor Sylvester Turner and Chief Troy Finner for their important roles in supporting a memorial for Torres and his family.

For more than four decades, the Torres family was never offered a public apology by officials for what happened until June 2021. That was when Chief Finner, who was 10 years old at the time of the murder, stood before Torres family members and said, “There was no justification for what happened that night.”
“That’s a straight-up murder,” said Finner. “I stand with his family, and I stand with all families who have suffered injustices by police officers.”

Mayor Turner said, “I joined Police Chief Troy Finner to apologize to his (Joe Campos Torres’) mother and other loved ones on behalf of the city of Houston.”

Attorney Gracie Saenz, former Houston City Council member, said she was among those who witnessed the apology last year by officials to the Torres family during a meeting with LULAC Council 60 members.
Saenz said, “To witness this moment was so historic in its significance, so moving in its honesty and yet so painful.”