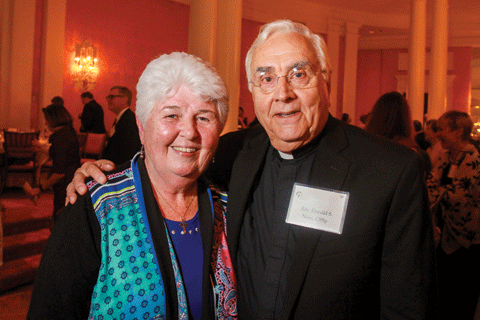 "Only when we understand the wonderful works of God can we understand that Sister Maureen's life and ministry have been a loving response to God's call and invitation," said Father Donald Nesti, CSSp, interim director of the Center for Faith and Culture. "Otherwise we could never conceive of how a police woman and a nun could be united in one to create an Angela House in and through which God's Mercy flows so abundantly. Sister Maureen is the founder and executive director of Angela House, Houston's leading transitional, residential facility for women exiting the criminal justice system."

In 1965, Sister O'Connell took the entrance exam for the Chicago Police Department and passed it. She entered the police academy, received a badge and a gun and joined the force, working in the youth division and later as a gambling and vice investigator.

In 1977 she was called to join the Dominicans of Adrian, Michigan, for their commitment to social justice and the preferential option for the poor.
After her profession, Sister O'Connell returned to the police department as a chaplain. After 13 years as a police officer, she left the force to pursue a master's in social work from the University of Houston. She is a Certified Clinical Social Worker, a Licensed Marriage and Family Therapist, and approved Social Work and Marriage and Family Therapy supervisor in the state of Texas.

For 16 years, Sister O'Connell worked with children who experienced physical and sexual abuse, knowing that early intervention is the strongest hope for healthy adult lives.

In 2001, Sister O'Connell founded the Angela House, responding to an enormous unmet need for housing and rehabilitative programming for women being released from jails and prisons in Texas. Through her advocacy and love, she has helped lift countless women to enduring sobriety and independent, resilient lives.

Sister O'Connell also serves as the Victims Assistance Coordinator for the Archdiocese of Galveston-Houston.

The Faithful Citizenship Award is conferred upon persons who, led by the Holy Spirit, manifest the incarnate love of God for His world in their lives and actions as Catholics. Their experience of the Love of God and the way it flows through their attitudes and actions, is made real in the contributions that they make to civic, economic, political, social and religious dimensions of the way of life that "We the People" share as citizens of our democratic republic, the United States of America.