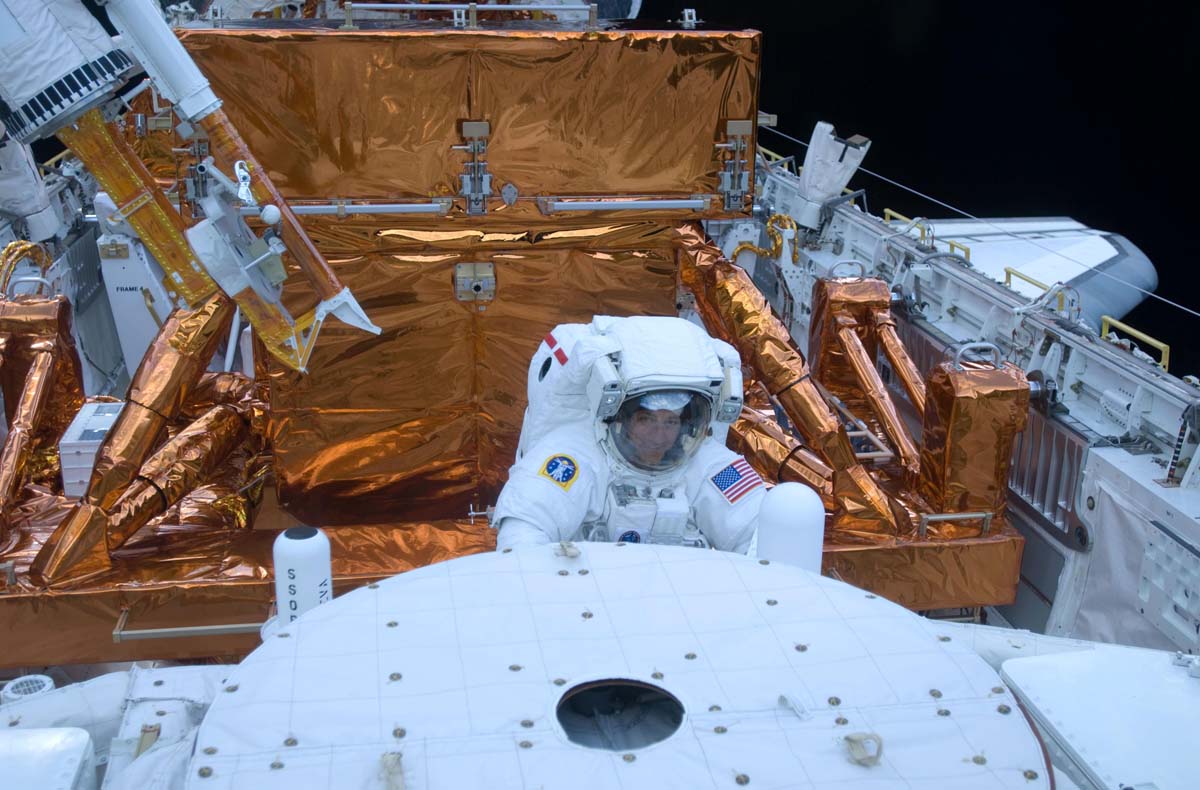 Astronaut Mike Massmino services the Hubble Space Telescope in the cargo bay of the space shuttle Atlantis May 15, 2009. Massimino, who is Catholic, said that seeing Earth's beauty from orbit confirmed how great God's love is. (CNS photo/courtesy NASA)

“The universe is a big place, and all of it belongs to God’s creation, so all of it is a source of wonder and inspiration,” he said. “The motto of the Vatican Observatory is ‘Deum Creatorem Venite Adoremus’ (Come, let us adore God the Creator). In studying the universe and all that it contains, we can better appreciate the God who created it. For us, doing science is a form of worship.”

While he was born in Fort Worth after the Apollo missions, Brother Macke said he’s still inspired by others like the Viking missions to Mars, or the Voyager expeditions to the outer planets.

“My father, who was trained as a geologist but spent his career in the Air Force, would bring us photos from these missions,” he said. “He filled our home library with countless books about space and related sciences. I dreamed of visiting these planets myself.”

Brother Macke said that since all Creation is from God, "it is good, and therefore worthy of study.

"The science that I do is the same science that everybody else does. I collaborate with scientists of all faiths (and no faith) and together we produce good science," he said. "However, for me the context within which I do my science is very much informed by my faith. Science, for me, is an extension of the awe and wonder that I experience when I contemplate God's grandeur and his immeasurable love manifested in the universe that He gave us."

Working with his Vatican Observatory colleagues, Brother Macke said "every day is different... which keeps the work fresh and exciting."

“My office is littered with models of the Apollo spacecraft, unmanned space probes, and space telescopes,” he said. “My research has even included work with Apollo moon rocks, which has involved several trips to the Lunar Receiving Laboratory at NASA’s Johnson Space Center.”

He said the Apollo missions reflect a time of unity, a sense that’s missing in today’s society.

“The Apollo missions... should serve as a source of inspiration for us all,” he said. “Going to the moon was thought to be impossible, but with the whole nation working together toward this goal we could accomplish it. Today we live in a society that is polarized and contradictory. This will get us nowhere. We need to work together. By working together, we can accomplish the impossible."

He pointed out how the Apollo missions were accomplished by human begins, and "not by robots."

"The astronauts and the army of support personnel were people who brought their humanity with them," he said. "From the very start, this included religious faith. The crew of Apollo 8, in orbit around the Moon on Christmas of 1968, read to the people of Earth from the Book of Genesis."

Signs of the Apollo missions are found throughout the Vatican Observatory, he said.

Brother Macke cares for a moon rock from Apollo 17, a goodwill gift from United States to the Holy See. A display case also holds a piece of the "Moon Tree," a sycamore at the Lunar and Planetary Lab in Tucson that was grown from seeds that flew on the Apollo 14 mission.

The Vatican Observatory guestbook has a signature of Frank Borman, dated Feb. 15, 1969, less than two months after he, James Lovell and William Anders became the first three men to orbit the Moon on the Apollo 8 mission, Brother Macke said.

Borman also gave the Observatory a signed print of the famous "Earthrise" photograph, which now hangs on an Observatory wall next to a signed photograph of Eugene Cernan from Apollo 17 that is addressed to St. Paul VI.

In one of the Observatory domes, Brother Macke said a photograph shoes St. Paul VI watching the Apollo 11 landing from that exact location.

Brother Macke said he loves his work for the Vatican Observatory.

“I find inspiration all around me, from the meteorites that I study to the photographs of deep space hanging on the wall,” he said. “I am also very inspired by my fellow astronomers of the Vatican Observatory, all of whom are priests or vowed religious, and all of whom are very accomplished scientists.”