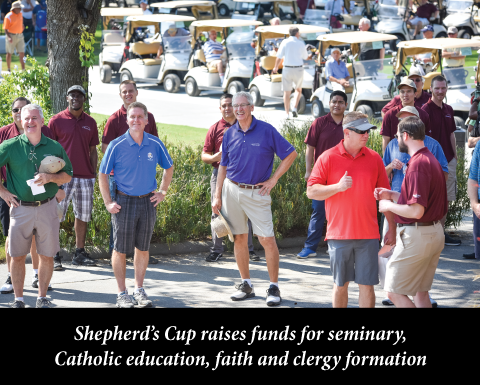 KINGWOOD — On Oct. 3 title sponsors Sean and Kari Tracey and the Tournament Planning Committee from the Galveston-Houston Knights of Columbus Charities welcomed more than 320 golfers from the Archdiocese to Daniel Cardinal DiNardo’s ninth Annual Shepherd’s Cup Golf Classic at the Clubs of Kingwood. The tournament benefits St. Mary’s Seminary, Catholic education and faith and clergy formation.

Seminarian volunteers invited golfers to take a chance on raffle baskets including an RTIC cooler and weekend getaway packages. Golfers could also buy a chance at the new Holy Spirit — Wine/Liquor pull.

St. Mary Magdalene Catholic Church in Humble took home the Shepherd’s Cup trophy for the second time. They are the only church to have won it since its inception. It is a rotating cup that is presented each year to the parish team with the best low net score.