Seminar guides seniors to modify homes as they age 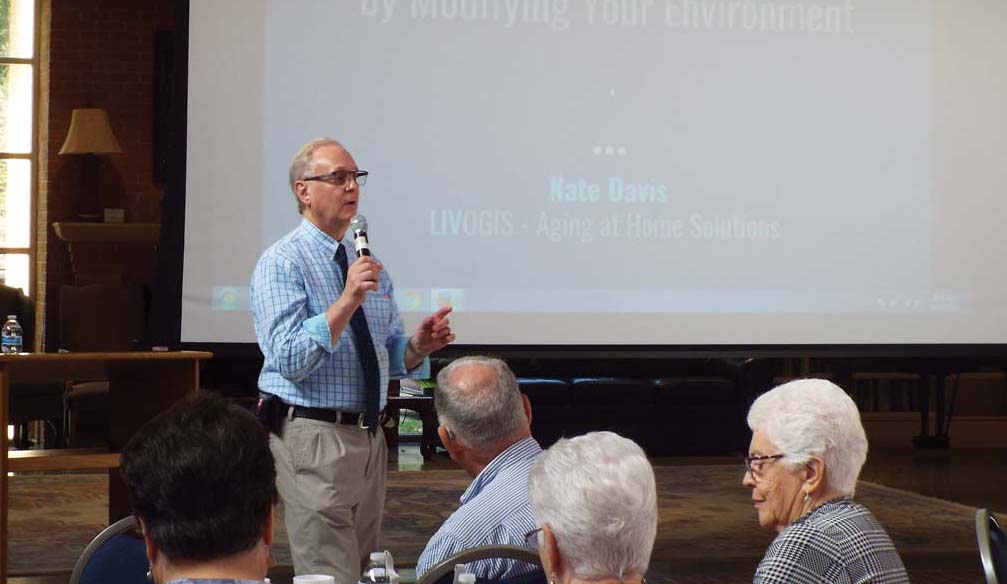 HOUSTON — Gayle Naar, a parishioner at St. Cyril of Alexandria in west Houston, said she was 70 when she recently fell and hurt her back, leaving her homebound for several months.

As president of the Archdiocese’s Southwest Senior Senate, she asked the Office of Aging Ministry to consider organizing seminars for people to learn how to maintain their independence to live at home.

“It is never too early to prepare. Thankfully, I have good neighbors who helped me get groceries, get my mail, take out my garbage and feed my pets. But not everyone is so blessed to have someone to do all that,” Naar said.

So Office of Aging Ministry director Kathy Bingham helped organize just such a seminar, with the first held May 15 at St. Cecilia Catholic Church. About 100 attendees from more than 15 different churches participated.

“It’s very critical for people who want to remain living at home as they age to know their options,” Bingham said.

Speakers guided the group on how to modify the home environment as people age, selecting a reliable home care agency and financial considerations. Mark Cieselski, associate director, said he coordinated the speakers and community vendors with the specific needs identified by the Southwest Senior Senate.

Nate Davis, of Livogis Aging at Home Solutions, said while 90 percent of elderly want to remain in their homes rather than nursing homes, only four percent have set up their homes to do so.

“The first step is to do a home assessment, starting with the entry and exit into the home,” Davis said to check if threshold mats or ramps may be needed.

In assessing indoors, brighter lighting and removing tripping hazards such as rugs also help, he said. Bathroom remodels may be needed to have a flat walk-in or roll-in shower with no step or lip from the floor. For a variety of reasons, he did not recommend walk-in bathtubs, which are advertised on television.

“It’s a very slippery surface, and if a person falls in the tub or is unable to get out, it is difficult to remove the person who is usually blocking the little tub door,” he said.

Now there are also “tilt toilet seats” that work similar to the better known living room reclining chairs that raise and help bring people to their feet, Davis described.

“And there are also more technology-driven devices that are voice-activated. While some elderly may not like technology, it could save your life,” he said of such devices as Google Home and Alexa.

Another speaker, Jim Vonderhaar of Griswold Home Care that does non-medical care, recommended interviewing prospective company caregivers to find the right match. Some of the questions to ask include whether or not they deal with wound care and other health issues.

Other questions include what type of experience company caregivers have for specific diagnosis such as dementia and experience with transferring from wheelchair to bed. Most caregivers’ fees can range from $20 to $26 an hour and can vary for a set amount of time, he said.

Medicare and Medicaid do not pay for most of this type of care. Ways to finance are mostly private pay or expensive long-term care insurance and some assistance for veterans, he said.

Joanne Schofield, who drove in from Katy where she attends St. Faustina Catholic Church in Fulshear, said she found the seminar helpful as did John Crowe and Margaret Fuller of St. Michael Catholic Church.

“The choices of different speakers were really good. They gave us direction on how to get organized for home care,” Crowe said.

More than a dozen vendors were also present, including St. Dominic Village, Pin Oak Caregivers who were checking blood pressures of willing participants and DispatchHealth, an urgent medical care service that sends medical staff to the homes.

Bingham said with the success of this seminar, the Office of Aging Ministry plans to hold similar programs later in the year with the Central and North Senior Senates and invite area parishioners to register.