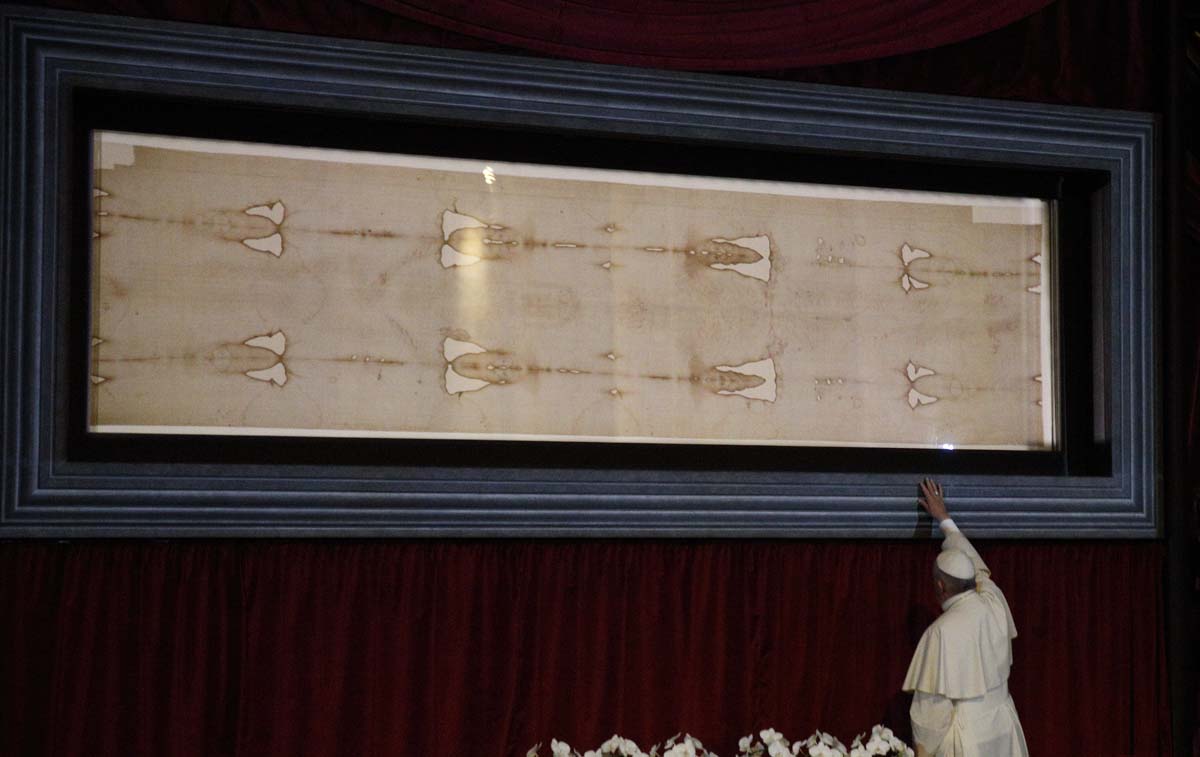 Pope Francis touches the case holding the Shroud of Turin after praying before the cloth in 2015 at the Cathedral of St. John the Baptist in Turin, Italy. An upcoming series of presentations about the Shroud will unpack its significance and spirituality right in time for the penitential season of Lent, which begins on Ash Wednesday on March 2 and ends on Holy Thursday, April 14. (Paul Haring/CNS)

HOUSTON — A much-debated image of a bearded man reveals he suffered scourging and crucifixion befitting a criminal, yet his valuable burial cloth is a wrapping of ritually pure linen now known as the Shroud of Turin.

As Lent approaches, opportunities to learn more about the sacrificial love of Jesus are available at Archdiocese parishes and universities through scheduled presentations on the shroud.

The 14-foot long by 3.3-foot wide linen cloth bears the image of a crucified man, which many believe is the authentic burial cloth of Jesus Christ, and is one of the most scientifically studied artifacts in the world, said presenter Nora Creech.

“Prepare your heart for the season of Lent by meditating on our Lord’s Passion vividly depicted by the wounds on the Shroud of Turin,” said Creech, who earned a Master of Arts degree in Faith and Culture from the University of St. Thomas in Houston.

Currently pursuing a certificate in Shroud Studies from the Pontifical Athenaeum Regina Apostolorum in Rome, Italy, she will be sharing a free presentation titled “Seeking the Face of Christ: How the Shroud of Turin Reveals God’s Love” at several locations.

The original shroud has been kept in the royal chapel of the Cathedral of Turin in northern Italy since 1578. Scientific research confirms it was not painted but contains human blood. They have not been able to explain how the mysterious image was formed.

Scientists from Italy’s National Agency for New Technologies, Energy and Sustainable Economic Development have spent years trying to replicate the shroud’s markings. The scientists claim the image could not be the work of medieval forgers but instead could have been caused by a strong flash of light.
The shroud also shows a reverse image, like a photographic negative, somehow created long before the invention of photography. In 1898, an Italian photographer named Secondo Pia became the first person allowed to take a photograph of the Shroud of Turin. When he developed the film in his darkroom, he was astonished to see the faint markings reverse their colors and the clear image of a face materialize on his negatives.

But in 1988, radiocarbon tests on the Shroud of Turin dated the cloth between 1260 and 1390, implying the shroud was a medieval forgery. After a 2017 Freedom of Information request, a new team of researchers gained access to the original data used for the 1988 test.

This new team found that the 1988 test results were unreliable. So new non-destructive tests were run on some of the linen threads from the 1988 sample using infra-red light and spectroscopy. The examinations date the shroud between 300 BC and 400 AD, within the era of Christ. It determined the earlier results may have been skewed by contamination from fibers used to repair the cloth when it was damaged by fire and restored in the Middle Ages.

Creech, in her presentation, said the cloth affirms that the lifeless body image reveals a bearded adult man about five-foot, 10-inches tall, who suffered marks of scourging and crucifixion but was given an honorable burial wrapped with linen woven in a herringbone twill. According to ancient Jewish liturgical customs, the curtains of the Temple in Jerusalem were made from this same type of linen.

His arms were crossed on his torso while the cloth marks what appears to have been rivulets of blood from wounds in the wrists, feet and side. His nasal septum was fractured, and the right part of the face swollen. The blood on the cloth examined by a medical surgeon is human, Type AB, one of the rarest in the overall population but more common among Jews.

The Catholic Church has not taken an official position on the shroud. But similar to previous papacies, Pope Francis visited the shroud when it was last publicly displayed in 2015 and drew more than two million people to view. It was also livestreamed in 2020 during Holy Week to pray for the healing of those impacted by the coronavirus pandemic.

“The icon of this love is the shroud that even now has attracted so many people here to Turin,” Pope Francis said. “The shroud draws [people] to the tormented face and body of Jesus and, at the same time, directs [people] toward the face of every suffering and unjustly persecuted person.”

Creech said she plans to give her free presentations starting Feb. 28 at St. Mary’s Chapel at the Rice Catholic Student Center, where registration is required due to limited space.

For more information, including times and locations, visit the National Museum of Funeral History (NFMH) calendar. The NFMH is co-sponsoring the presentations.

Creech said these presentations are just a prelude to an exciting project that the Museum of Funeral History in Houston plans to bring a permanent exhibit of the Shroud of Turin to the museum at 415 Barren Springs Dr.

The coronavirus pandemic delayed 2020 plans to kick off the exhibit, Creech said. But since that time, the Museum of the Bible in Washington, D.C. has developed a state-of-the-art temporary exhibit on the shroud, set to open Feb. 26.

Genevieve Keeney, president of The National Museum of Funeral History in Houston, said it will be partnering with the Museum of the Bible to bring some traveling artifacts to Houston in September.
Keeney said, “We will use this as an opportunity to kick off our capital campaign and to raise awareness of the planned permanent exhibit.”

The current timeline for the permanent exhibit in Houston is spring of 2023.