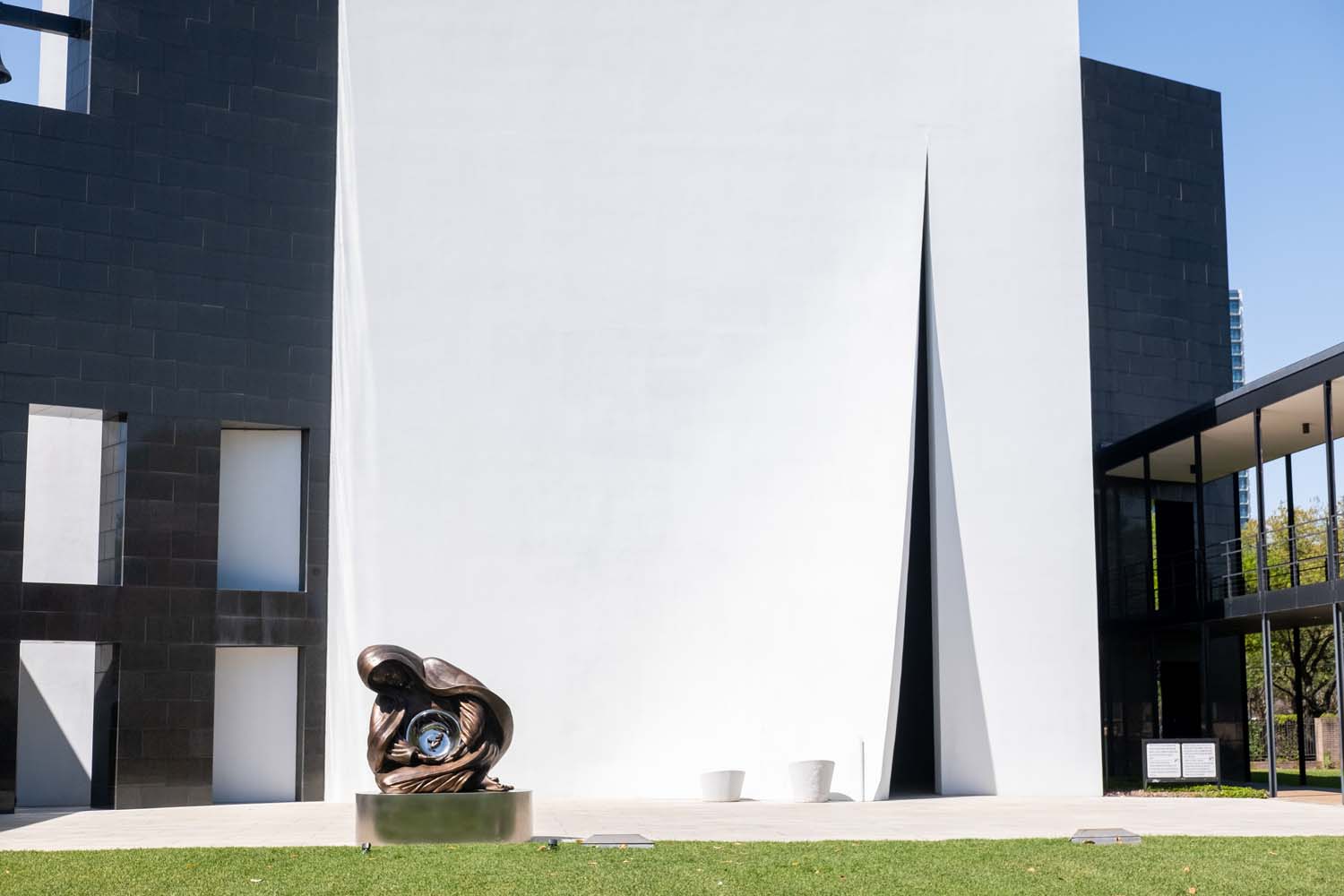 A bronze statue by sculptor Tim Schmalz brings an artistic prolife message to the University of St. Thomas campus and Chapel of St. Basil in Houston. Photo by James Ramos/Herald)

A CLOSER LOOK: Photos and Videos of the Life Monument at UST and in Rome

HOUSTON — The dark bronze sculpture seems to shimmer in contrast to the stark white stucco walls and the sharp black granite adjacent to the Chapel of St. Basil at the University of St. Thomas.

Since early 2022, the Catholic university has hosted the larger-than-life cast bronze sculpture that depicts a veiled mother embracing a child in her womb.

The pro-life work by Canadian sculptor Tim Schmalz represents a Madonna and child, with the child still in the womb, according to a UST statement. The child is suspended in mirrored steel that creates a reflection of the world around it, including nearby trees, the sky above and viewers just feet away. The sculpture shares a peaceful message of a hopeful embrace of life while challenges to the sanctity of life continue around the nation. Even from far across UST’s Academic Mall, the sculpture is eye-catching at all hours of the day.

A smaller casting of the sculpture was dedicated May 29 at the Church of San Marcello al Corso in Rome, Italy, by Monsignor Vincenzo Paglia, president of the Pontifical Academy for Life.

A few days later, on June 5, UST hosted its own blessing ceremony with Father Dempsey Rosales-Acosta, who blessed the sculpture. He stressed how the work of art was a reminder of the sacredness of human life and the protection of the unborn.

"This sculpture of the Blessed Virgin Mary and the unborn Jesus seeks to remind us of the beauty and sacredness of all human life," he said, according to a UST statement. "Mary is Christ's mother, the mother of God, but she is also the image and the model of the church. This monument invites us to see ourselves in the womb of the world created by God."

During the ceremony, visitors placed white and yellow roses in and around the sculpture as a sincere act of reverence.

"The fact that this sculpture is here is just one manifestation of how we can celebrate the great gift of his love and life that God gives for all of us," said UST's President Richard Ludwick. "It is perfectly fitting that we have it here at University of St. Thomas."

This sculpture, part of a “National Life Monument” series, will be showcased at UST until June 30.

It will then travel to another five locations around the nation before being permanently installed at the Basilica of the National Shrine of the Immaculate Conception in Washington, D.C. Organizers also hope to place a life-size version of the artwork in every U.S. state.

Daniel Cardinal DiNardo invited the organizers to bring the work to the Archdiocese.

Named after St. Basil the Great, the namesake of UST’s founding fathers of the Congregation of St. Basil, the chapel was completed in 1997. The sacred space completes UST’s Academic Mall, which was also designed by Johnson some 40 years earlier, according to UST.

The chapel hosts daily Mass and welcomes some 225 people for prayer with its naturally lit space. A skylight over the altar and a bronze sculpture of Our Lady Seat of Wisdom and the Child Jesus, both of whom sit atop a replica of the chapel, brightens the chapel. During day and night, the glass cross shines from the chapel’s western wall.

Outside, three geometric shapes make up the construction of the chapel: a 50-foot white stucco cube with an opening reminiscent of a tent, a golden-tiled sphered dome that’s topped with a large cross, and a deep black granite plane that intersects the dome and the cube.

Purposely placed opposite the college’s library, the chapel’s location indicates the relationship between faith and knowledge and the pursuit of education in the Catholic intellectual tradition.

A special Mass and reception were held on June 7 to mark the 25th anniversary of the dedication of the Chapel of St. Basil. The university also marked its 75th anniversary this year.

For more about the sculpture, the Chapel of St. Basil and Mass times, visit www.stthom.edu/mass.