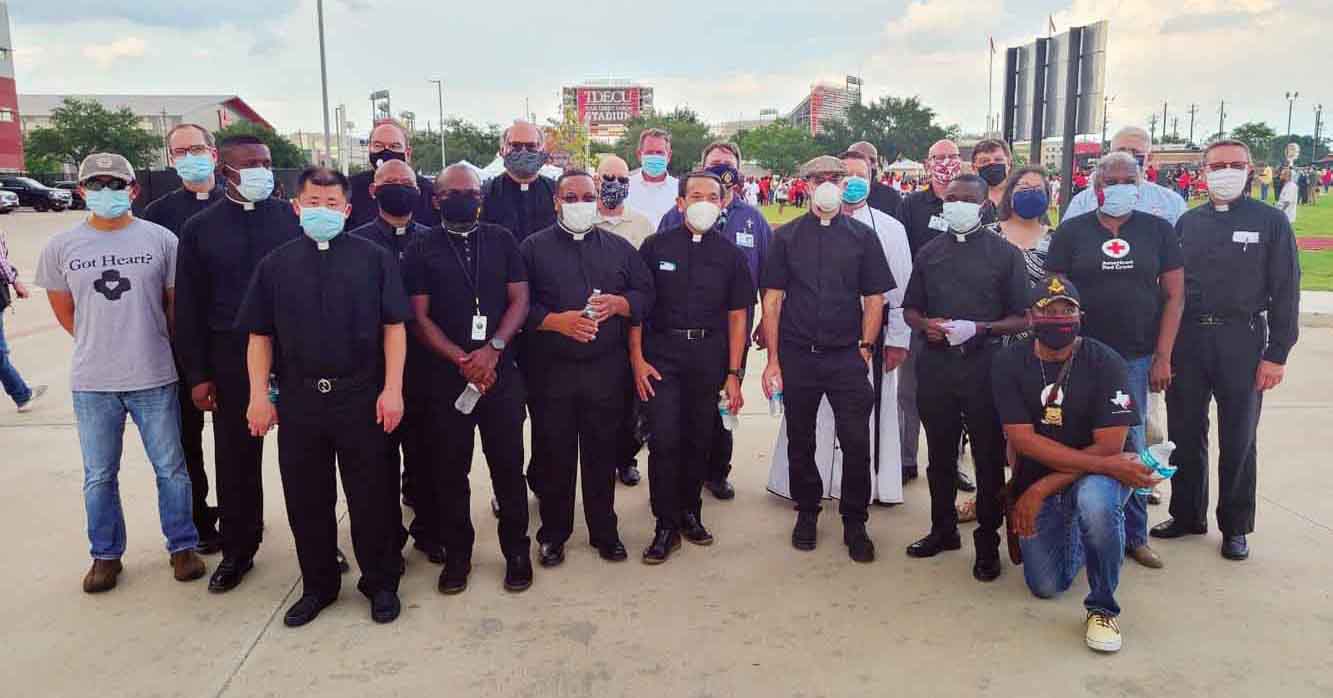 Father Reginald Samuels, vicar for Catholics of African Descent, attends with other clergy and laity a candlelight vigil for Houston-native George Floyd Jr. on June 8 at Yates High School in Houston. Floyd was a Black American man killed during an arrest in Minneapolis, where a white police officer knelt on his neck for nearly nine minutes. After his death, protests against police violence spread around the world. (Photo courtesy of Father Reginald Samuels)

Catholics of African descent all over the nation have been calling for an end to racism and racial justice after the killing of George Floyd. The cry for racial justice is being declared by the Catholic Church leaders as well.

Now is the time to move to action to bring an end to racism and start the healing that is needed in our Church, community and country.

Pope Francis said of the recent events in the United States: “We cannot close our eyes to any form of racism or exclusion while pretending to defend the sacredness of every human life.”

Daniel Cardinal DiNardo early in June issued a statement in regards to racism in our Church, community and country: “Plainly stated, for it is plain to see, we in America have a plank in our eye with regard to racism. This is a tough but necessary reality to confront because we cannot address a problem until we acknowledge it. This includes us as members of the Catholic Church.”

In 2018, after a number of “episodes of violence and animosity with racial and xenophobic overtones,” the U.S. Conference of Catholic Bishops issued a pastoral letter called: “Open Wide Our Hearts” which condemns racism and vows to use the Church to combat it.

In the pastoral letter, the bishops wrote: “There have been many times when the Church has failed to live as Christ taught — to love our brothers and sisters. Acts of racism have been committed by leaders and members of the Catholic Church — by bishops, clergy, religious and laity — and her institutions. Consequently, we all need to take responsibility for correcting the injustices of racism and healing the harms it has caused.”

“The denial of the dignity and sanctity of Black life is a part of the DNA of this country. It is also a foundational sin of the American Catholic Church. Black Catholic history reveals that the Church has never been an innocent bystander in the history of white supremacy. If there will ever be a chance for true peace and reconciliation, the Catholic Church must finally declare with all of its might and resources that Black lives do matter.”

Many African and African Americans face the gambit of offenses, to outright indifference to their plight to total hostility from the people in the pews. Many feel that their voices are ignored and see their issues not being addressed at all. Many parishioners simply don’t want to talk about race, let alone deal with racism in their own back yards.
The big question now is where we go from here.

Next, we all need to enter into prayer to eradicate the sin of racism in our Church, community and country, calling on God to move hearts to recognize every human person’s dignity.

To conclude, I invoke the prayer at the conclusion of the bishops’ pastoral letter on racism: “We ask for your help in following your Son so that prejudice and animosity will no longer infect our minds or hearts but will be replaced with a love that respects the dignity of each person. Amen.”

For more resources on the fight against racism, visit www.archgh.org/racism.

Father Reginald Samuels is the Vicar for Catholics of African Descent in the Archdiocese of Galveston-Houston.