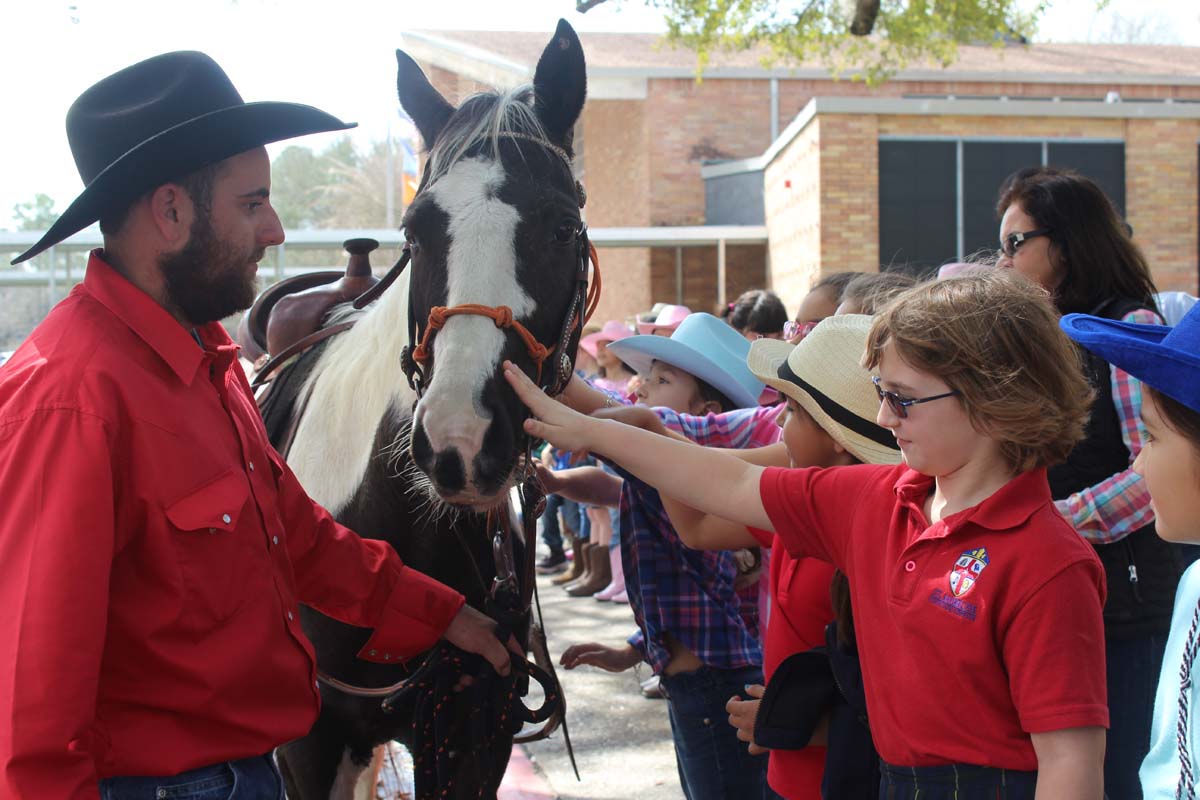 HOUSTON — As big-name singing stars like Garth Brooks, Blake Shelton, Little Big Town and Luke Bryan pack the NRG Stadium along with cowboys and cowgirls demonstrating their skills, students at the Archdiocese’s Catholic schools are winning awards in the Houston Livestock Show and Rodeo’s artwork competition.

Catholic school students participated in numerous events at the Houston Livestock Show and Rodeo. At least one teacher participated in the annual trail ride, with dozens of young students entering art competitions, many winning awards of distinction.

A letter from the rodeo’s Western Heritage Community Challenge decorating contest stated the rodeo had almost 10,000 entries from across the city of Houston and surrounding areas, of which the rodeo committee selected 150 winners.

As a reward for their participation and winning entries, the students received a congratulatory letter, a participation ribbon, and four tickets to the Houston Livestock Show and Rodeo. The tickets will admit them to the livestock show, AGVENTURE that includes a petting zoo, the carnival and other exhibits.

The winning entries are being displayed during the Rodeo this year in the NRG Center, Hall B, near Miss Moo’s Barn.
Students at St. Ambrose Catholic Church enjoyed their close encounter with cowboys and horses as about 40 of the Sam Houston Trail Riders from Montgomery County swung into the church’s parking lot to have lunch before the parade kicked off Feb. 24.

Students, prekindergarten to eighth grade, welcomed the wagons, horses and riders with hoots, hollers and howdies from the riders, many clad in their finest Western wear.

St. Ambrose school principal Judy Fritsch said, “Our children really love when the trail riders come by. Some of our little ones even got to sit up on a horse for the first time in their lives.”

The Sam Houston group, the second oldest trail ride to trek to the rodeo since 1955, was bound for the world’s largest livestock show and rodeo.

On opening night Feb. 27, the first winner of the rodeo’s Mutton Bustin’ competition was a curly-haired red-head who could give former child star Shirley Temple a run for the cuteness factor. Marlie McDonald said she listened to her parents and held on really tight to the sheep’s wool as she rode “until I cannot get a grip” anymore. She told the audience that she wanted to be “a spy” when she grew up to save the world.

Garth Brooks, as the opening performer for the rodeo Feb. 27 who will also be the closing act March 18, bowed at the waist, waved his cowboy hat, grinned widely and chuckled loudly to show his appreciation to the 75,000-plus crowd applauding, whooping and hollering along with his 13-song set. Starting off with the 1991 hit “Rodeo,” to “The Thunder Rolls” complete with lightning and rain effects, and “Friends in Low Places,” Brooks entertained as the master performer he is.

“You’re too good…too good,” he told the audience. “You don’t know what you’re doing — it’s like pouring gasoline on a fire!”

Speaking of, fireworks blasted red and white sparkles, greeting the first performer in the rodeo line-up as Brooks christened the brand-new, multi million-dollar Stars Over Texas stage. As it was rolled out to the center ring with its prongs still folded up, the stage appeared more like Darth Vader’s TIE Fighter in Star Wars.

As the prongs slowly unfolded, the five-pointed stage lit up with multitudes of dazzling red, yellow and other bright lights that could hypnotize or blind before finally melting into a mellow blue depending on the tune. Even the song “Two Pina Coladas” lit up the stage with palm trees and beach party theme like a tropical paradise.

Pointing out that his last appearance at Rodeo Houston was back in 1993, Brooks left fans hoping his return in future years won’t take as long.

Whether artists, singers, riders or students, when the rodeo is in town, the community together remembers the frontier spirit.