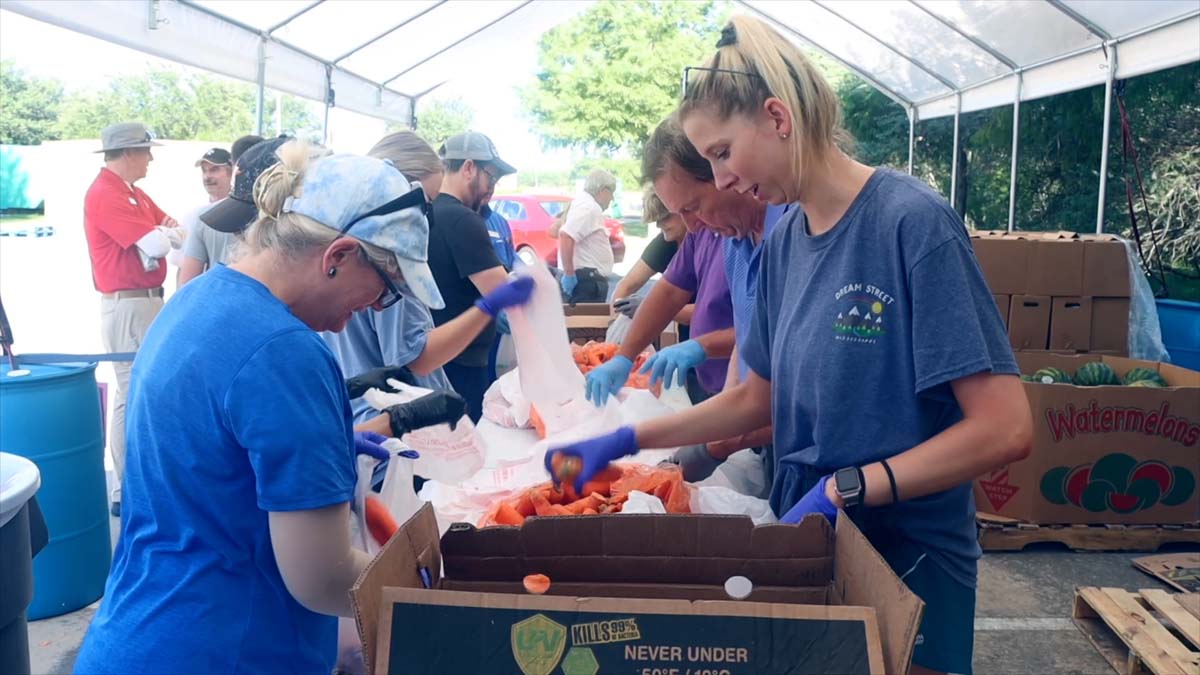 Volunteers at Catholic Charities’ Mamie George Community Center in Fort Bend County help bag groceries for families in need to pick up during several drive-through lines. Clients can remain in their cars while volunteers place bags and boxes in the trunks. Rising food and gas prices are sparking need for donations throughout the Houston area, but stores are slowing their surplus giving, officials say. (Photo by Catholic Charities)

HOUSTON — A father on limited income raising three children — two under five years old — recently drove from their Pearland apartment to a Catholic Charities food pantry 25 miles away near downtown Houston for groceries for his family.

“He came in with all his paperwork showing a fixed income. We were able to provide him with food, cleaning supplies, toilet paper, paper towels and a gift card for gas,” said Monica Perez, Catholic Charities associate vice president of programs.

Even as the pandemic ebbs, rising food and gas prices are sparking an increasing number of families in need seeking grocery donations from parishes, ministries and other charities.

Food pantries across the region, including Catholic Charities and the Society of St. Vincent de Paul, are serving a rising spike of people in need spreading to suburban areas. But their donations are falling from grocery stores and private individuals, who are also hit by higher prices and less surplus.

Shayne Baker, food market coordinator for Mamie George Community Center (MGCC) in Fort Bend County, said, “We’re considered a supersite by the Houston Food Bank, and we’ve seen the number of those in need in our area grow to about 1,000 families per week.”

The Catholic Charities’ center at 1111 Collins Road in Richmond is located where one in four people in that Richmond-Rosenberg area lives in poverty, including elderly and children.

Those families, who average about four people each, are either “working poor” or already on monthly assistance with limited dollars that no longer stretch as much. Before the pandemic and inflation hit, those numbers had been about 400 to 500 families a week before doubling, Baker said.

“We have not seen a decline this spring like we usually see after the busy winter holidays,” she said. “But the trickle-down inflation has us receiving less food donations from grocery stores that used to give us their surplus and fewer private individuals donating money or food.”

The higher demand and less supply are especially difficult in expensive commodities of meat and milk. Even some canned foods have become sparse with sporadic transportation deliveries, she said.

One method of food distribution that started during the pandemic — food drive-throughs where clients remain in their cars while volunteers place bags and boxes of groceries in the trunk — will continue as an option, Baker said.

On a recent Tuesday, over a two-hour period between 5 p.m. to 7 p.m., about 450 people drove through the food distribution line at MGCC.

“We do one evening distribution for those working families, and then we do mornings on Thursdays from 9 a.m. to 12 p.m.,” she said. Walk-ins now are also welcomed back inside the Mamie George center’s Trini’s Market to shop for what they need.

A busy spring also portends a very busy summer as children stay home for the break.
“We can only make it through volunteers and donations,” Baker said.

MGCC Executive Director Gladys Brumfield-James agreed: “The need for food is off the charts.”

She estimated, “In just the last five months, we distributed nearly twice as much food as we did during all of the last fiscal year.”

Perez, who helped serve the father from Pearland after he drove to the Catholic Charities’ Guadalupe Center at 326 S. Jensen near downtown Houston, said the inner city is also experiencing continuous growth in clients seeking food assistance.

Then it jumped to 9,850 individuals in the first three months of 2020 when the pandemic started locally.

With the Food Bank of Houston as the main supplier of groceries to most pantries, it has requested that pantries no longer give food only to those residing in the pantries’ zip codes.

Even on the island, Catholic Charities Beacon of Hope in Galveston has seen a jump to almost 14,000 individuals quarterly, she said.

Food assistance also comes through the Society of St. Vincent de Paul, which in 2020 and 2021 distributed more than 5.4 million pounds of food each year through its church pantries and main office, said Marie Schwartz, program director for the society.

It also helped 12,700 families with rent and utilities totaling $3.4 million in financial assistance. Depending on volunteers, the society centers on its John L. Food Depot at 6654 Gulf Freeway. St. Vincent hosts drive-through food fairs there on the first, third and fourth Saturdays, she said.

In November of 2020, the University of St. Thomas opened a pantry to serve its student population of at least 2,500-plus through its Veteran Success Center at 4219 Yoakum Blvd. in Houston. In March, officials renewed their effort to offer fresh produce, meat and other food staples to its students for free.

Houston Food Bank director of marketing and communications, Adele Brady, said the bank has 1,500 partner pantries throughout the region. Most are church- or faith-based pantries as well as school districts and community centers.

“People are still responding with donations, but dollars are just not stretching as far,” she said.

Donations from grocery stores giving their surplus are also down. The bank is receiving about seven million pounds a month from stores versus the previous average of about 8.8 million, Brady said.

Houston Food Bank pantry partners are also seeing an increase in people needing assistance at its churches and centers, said Amy Ragan, its chief development officer.
“It will get a lot higher once school is out for the summer. Families will be without the help of schools providing breakfasts and lunches for students,” she said.

While not the high numbers caused by COVID-19 with its ensuing unemployment, the numbers have not dropped to pre-COVID-19 numbers. Continuing inflation will spur even more need, Ragan estimated.

“Donations are not going as far, and we need more volunteers,” she said. “Whatever people can give will be greatly appreciated. We’re trying to stretch the dollars as much as we can.”

Donate today to help our brothers and sisters in need

Catholic Charities of the Archdiocese of Galveston-Houston