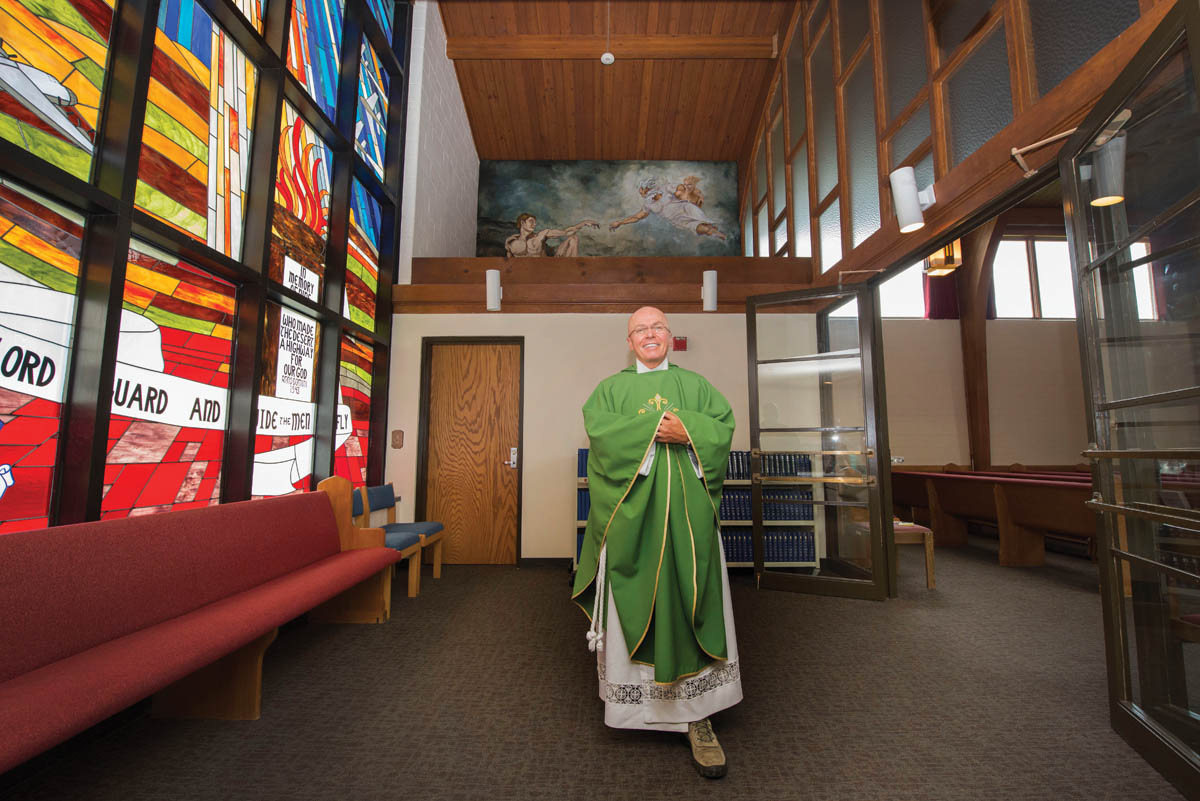 Likening it to a scene out of the television series “M*A*S*H,” the former chaplain in the U.S.

Air Force said he and medical doctors would immediately suit up in flak vests and helmets before rushing to a sprawling military hospital to care for the wounded and receive the bodies of those killed in action.

“That was very powerful ministry,” said Father Gills, who was stationed at Balad Air Base in 2009 and now serves as pastor of western Maryland’s St. Peter the Apostle in Oakland and St. Peter at the Lake in McHenry.

The priest had previously served in another war zone at Jalalabad, Afghanistan, from 2005 to 2006.

“You’re face-to-face with 19- and 20-year-olds who had lost an arm or both arms, a leg or both legs, and writhing in pain,” Father Gills said, “and you would just touch them through prayer, and somehow God would work through those prayers to lift them up and give them renewed hope, and an optimistic view of the future and something they would not otherwise have gotten if it had just been medical treatment.”

Military chaplaincy gave Father Gills the chance to bring the Sacraments and spiritual counsel to men and women who were literally putting their lives on the line every day.
He said the constant threat of death in war zones made servicemen and women seek a relationship with God more intensely.

“We knew that we needed God’s strength and courage and assistance on a daily basis and sometimes from hour to hour,” Father Gills told the Catholic Review, the news outlet of the Archdiocese of Baltimore. “And most people who probably didn’t pray much in their civilian lives or at a home base prayed a lot more.”

Bible study and prayer groups formed in war zones, he said, and members would meet in the evenings to get “extra spiritual strength.”

Every Catholic he knew carried a Rosary, Father Gills said, with many of the prayer beads coming as gifts from Americans at home who crafted them through efforts such as the Ranger Rosary project that began at St. Mary in Annapolis.

Many servicemen and women also received Bibles and prayer books, he said.

“Those kinds of efforts really make military folks in war zones feel loved because no one knows who is serving there unless you have a family member there,” said Father Gills, who recalled sometimes celebrating Mass on the hood of a Humvee with two candles perched atop the vehicle.

Father Gills has loved God and country from a very young age.

Growing up in Rosedale, Maryland, he attended Mass daily with his grandmother.

At age 3, he was telling everyone he was going to be a “pwiest” when he grew up.

From age 6, the future clergyman showed interest in learning about how the country was run, cultivating a deep respect for the flag and frequently participating in patriotic events.

After enlisting in the U.S. Navy, where he served for four years after high school, he entered St. Mary’s Seminary in Baltimore and was ordained to the priesthood in 1986.
After serving as a parish priest, Father Gills was given permission to become a military chaplain by William Cardinal Keeler of Baltimore. He chose the Air Force, he said, because he has always loved to fly.

In 2001, when he was pastor of St. Charles Borromeo Parish in Pikesville, Maryland, Father Gills was called to active duty following the 9/11 terrorist attacks.
He was previously an Air Force Reserve chaplain for about a decade.

In addition to serving in Iraq and Afghanistan, Father Gills ministered in a variety of locations, including Germany, Italy, Qatar and the United Arab Emirates.
He was stationed at Hill Air Force Base in Utah from 2003 to 2007, Joint Base Elmendorf-Richardson in Alaska from 2007 to 2011 and the Wright Patterson Air Force Base in Ohio from 2016 to 2018.

One of the highlights of his military ministry was working with cadets as a chaplain at the U.S. Air Force Academy in Colorado from 2011 to 2016.

Young people of all faiths showed an intense commitment to their religious beliefs, he said, with many of the Catholics skipping dinner to attend Mass.

“That inspired me,” he said. “I was so incredibly touched by those young people who are putting God first in their lives.”

Retired since 2018 from the Air Force Chaplain Corps, Father Gills is enjoying being a pastor in the westernmost corner of Maryland since 2019.

He is grateful for his many years of military service, especially for the opportunity to pray with people of all faiths and of no faith.

Sometimes those prayers touched the hearts of those who had never gone to church or had any formal religious education, he said.

“Oftentimes a day or two later, they’d make an appointment with me as a chaplain and discuss something I said or something they’d been thinking about,” Father Gills said, “and I was able to lead many to Christ that way and also just discuss the power of God and God’s place in our lives. It was very meaningful.”