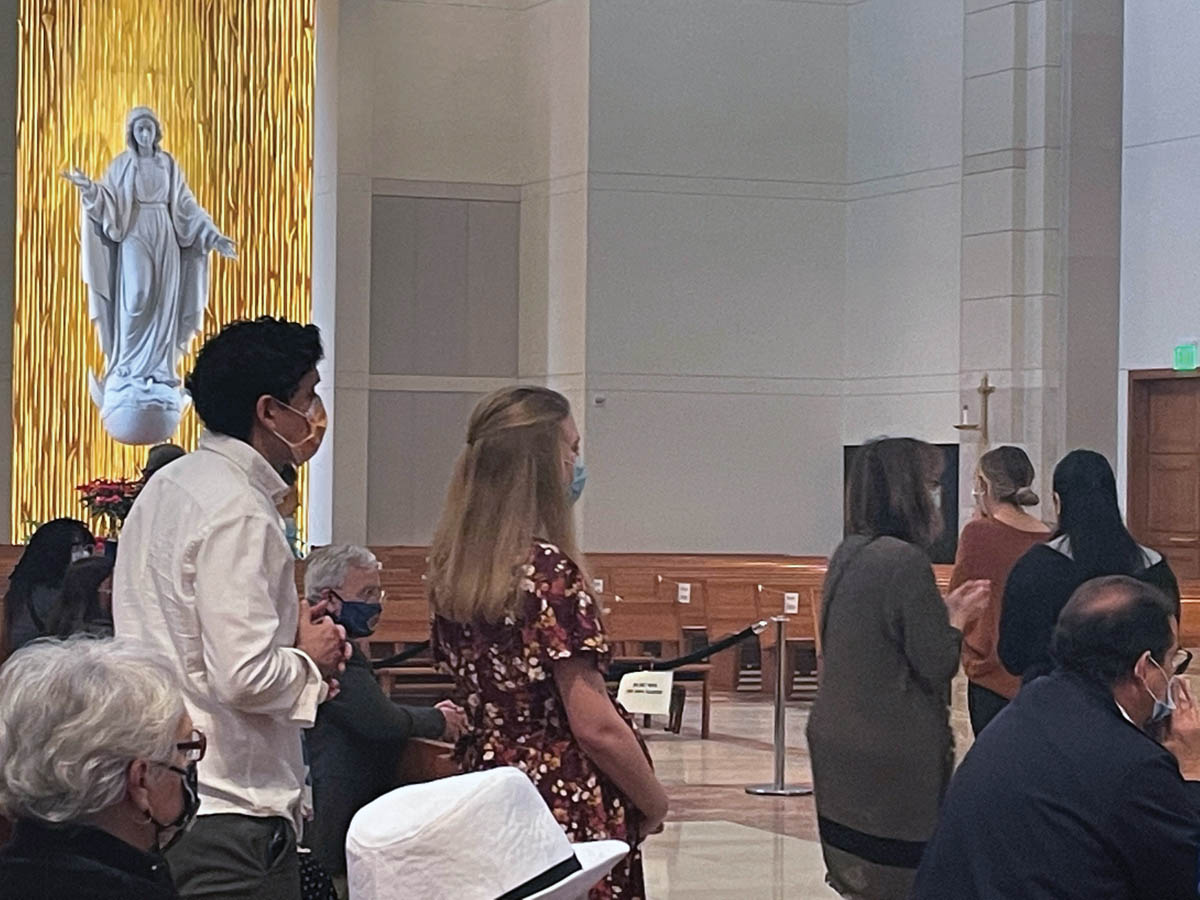 In line to receive Holy Eucharist at the Respect Life Mass at the Co-Cathedral of the Sacred Heart Jan. 23, a pregnant parishioner passes the statue of Mary. Daniel Cardinal DiNardo, who celebrated the Mass in conjunction with the 48th anniversary of Roe vs. Wade, said in his homily, “We need to be the voice for those who have no voice or don’t even have a name yet.” (Photo by Jo Ann Zuñiga/Herald)

HOUSTON — The Archdiocese of Galveston-Houston and others across the nation held a National Day of Prayer on Jan. 22 for pro-life with all-day Eucharistic Adoration, a Respect Life Mass celebrated by Daniel Cardinal DiNardo, and candlelight prayer vigils for the unborn at parishes.

The U.S. Conference of Catholic Bishops (USCCB) on Jan. 28 publicly decried U.S. President Joe Biden’s signing of an executive order allowing U.S. taxpayer funds to be sent to organizations that both promote and provide abortions in developing countries.

The policy which Biden overturned, known as both the Mexico City and the Promoting Life in Global Health policy, had separated abortion from family planning activities and ensured U.S. taxpayer dollars only went to organizations that agreed to provide health services in a way that respected the dignity of all persons.

The Biden administration has further promised to codify the principles articulated in Roe v. Wade into federal statutory law.

Julie Fritsch, director of the Archdiocese’s Office of Pro-Life Activities, said, “This is a concerning time for many Catholics as we face new policies at the federal level that expose the lives of our most vulnerable to increased threats.”

She added, “Despite these dangers — or perhaps because of them — it was deeply inspiring to join in prayer with so many Catholics throughout the Archdiocese. There is real joy in coming together as a Catholic family to pray in solidarity with our unborn brothers and sisters.”

“As people of faith, we know we are not ultimately in control; we turn to Our Lord, in hope and in faith, during this time of difficulty for so many,” she said.

Fritsch estimated about 250 personally attended the Eucharistic Adoration throughout the day, with several hundred more joining in prayer via livestream.

A similar number attended the Respect Life Mass on Jan. 23 at the Co-Cathedral of the Sacred Heart in downtown Houston. Cardinal DiNardo, referring to the Gospel of Luke 1:42-55, which contains the Magnificat, said in his homily, “Mary, a young pregnant mother of the Lord, says, ‘Yes!’”

He continued, “The life within her was more than anyone could imagine. Every child conceived in the womb is of great significance.”
Cardinal DiNardo encouraged those working and believing in pro-life to “offer help and support to families expecting children.”

“The new administration in the next few years may be a little bumpy,” he said. “We believe in the dignity of life from the moment of conception to the moment of natural death. But during this 48th anniversary of Roe vs. Wade, threats continue to come from abortion. We need to be the voice for those who have no voice or don’t even have a name yet.”

Cardinal DiNardo said, “We’re going to have a real rough time with abortion. But Mary is our model. She persevered even with a sword through her heart… She wasn’t Jesus’ incubator; she was His mother.”

He finished the Mass by giving a special blessing for “those striving to protect the gift of life.”

Fritsch also facilitated virtual panel discussions on Jan. 23 that included Greg Schleppenbach, associate director of the Pro-Life Secretariat at the USCCB, and Jennifer Allmon, executive director of the Texas Conference of Catholic Bishops, about pro-life legislative priorities at the state and federal levels in light of the new administration and the opening of the Texas legislative session.

Pope Francis, in a 2019 interview, said it is not fair or just to eliminate human life to solve a problem. “Abortion is not a religious problem in the sense that just because I am Catholic, I must not seek an abortion,” he said. “It is a human problem. It is a problem of eliminating a human life.”