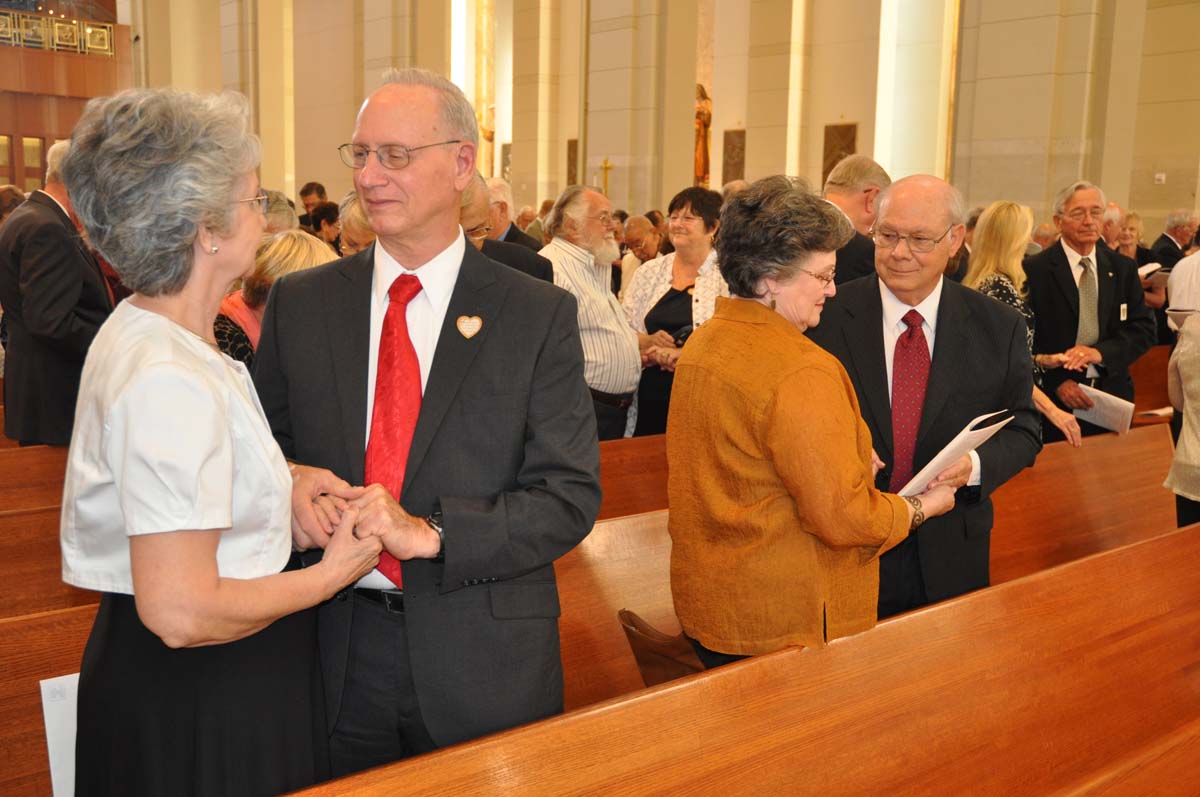 Extreme individualism, fast-paced lives, outbreaks of violence and organized crime, misuse of the Internet and technology, a weakening of faith and religious practice, and an absence of God in the family are some of the challenges marriages face today. Herald file photo.

HOUSTON — Encouraged by Pope Francis’ words in his Amoris Laetitia exhortation in April 2016, the Catholic Church worldwide has renewed its dedication to protecting, promoting and strengthening marriages and families.

In a statement by the United States Conference of Catholic Bishops, archdioceses and parishes nationwide are creating comprehensive pastoral plans to bring forth this rich vision of marriage and family life from the Holy Father.

According to Deacon Arturo Monterrubio, director of the Office of Family Life Ministry of the Archdiocese, healthy marriages and families are facing many situations that take a heavy toll that need to be addressed by the Church.

“Some of the most common situations families are currently facing include extreme individualism, fast-paced lives, outbreaks of violence and organized crime, misuse of the Internet and technology, a weakening of faith and religious practice, and an absence of God in the family, which leads to separation and divorce,” Monterrubio said. “We live in a culture that pressures young people to postpone weddings, cohabitate instead, and once married, postpone having children. All these aspects affect the health of our families, the domestic Church, so the Family Life Ministry responds the best way we can to provide services to meet these increasing needs.”

The Family Life Ministry, one of 60 ministries supported by the Diocesan Services Fund (DSF), offers a variety of programs and information for couples preparing to celebrate the Sacrament of Holy Matrimony for married couples, parents and families.

Monterrubio said he recently attended a Catholic convocation of lay leaders and was reminded of the Holy Father’s call for all Christians to go out and be missionary disciples, especially to those people on the periphery and who are forgotten.

“We cannot just sit down and wait for them to come to us in our chancery or parish offices,” said Monterrubio. “We especially need to accompany young couples in their marriage journey. We need to bring, with authentic joy, the good news of the Gospel to everyone, where they are.”

Through the ministry’s efforts across the Archdiocese, Monterrubio said approximately 1,000 couples each year are served through Marriage Preparation programs, both in English and Spanish. This includes marriage preparation programs around the Archdiocese held in various parishes, such as Picture of Love, that is available to couples preparing for Catholic marriage after a civil marriage.

Monterrubio said requests for marriage preparation programs are slowly, but constantly, increasing each year. Very important is the marriage preparation training offered by Family Life Ministry to clergy and lay members in parishes around the Archdiocese during the fall and spring.

“Very often, when we visit parishes, clergy and staff are surprised to find out we have a very robust training schedule,” said Monterrubio. “Our goal is for parishes to feel prepared and confident that they can create rich marriage preparation experiences for the couples who come to them seeking Catholic marriage, regardless of where the couples are in their life or faith journey.”

Monterrubio said marriage preparation programs, such as Catholic Engaged Encounter and Married in the Catholic Church, also are more important than ever before, since the secular culture has steadily become more marriage-unfriendly in the past several years.

“At the same time, and related to this issue, the sexual revolution has caused fornication, adultery and perverse sexual attitudes and actions to be viewed as ‘normal’ in our society,” Monterrubio said. “All these trends militate against stable sacramental marriages and families.”
Monterrubio said the Catholic Engaged Encounter program, implemented in 2012, now has an upgraded “outline” for the retreat weekends, making them more contemporary, clearer and more overtly spiritual in keeping with the holiness of the Sacrament of Matrimony. The success of the program is greatly dependent on the quality of volunteers who serve as sponsor couples.

One such couple is Adrienne and Colin Hamilton from St. Justin Martyr Catholic Community, who signed up to be an Engaged Encounter sponsor couple in June 2016 after they had their own positive experience with the weekend retreat.

Adrienne Hamilton said the sponsor couple’s primary goal during the retreat is to help the engaged couple learn how to be more open and communicative with fiancées, as well as learning the importance of taking time to focus on each other and relationship. Sponsor couples provide testimony on how the program has greatly benefited their own relationships, as well as give essential information about the fundamental values of having a sacramental marriage.

“The strongest messages about marriage in modern society focus on the superficial aspects, less meaningful values, or skewed notions of marriage,” said Colin Hamilton. “For example, modern culture often promotes the ‘happily ever after’ perception of marriage, and, if the marriage is less than perfect, the marriage can be ended.”

Hamilton said Engaged Encounter disproves these and other false notions, and clearly teaches truths that all couples should know. Communication is a key element of making marriages work, which includes being open to each other, sharing, and learning to deal with conflicts.

“Prior to our Engagement Encounter, we had discussed elements of our life together, such as having children and finances, but during our engagement, we had to deal with Adrienne’s breast cancer and my job loss,” said Hamilton. “Until our Engagement Encounter, we didn’t realize the different forms of communication and the depth of our discussions that were needed. We learned how our marriage is a Sacrament and what that actually meant to each of us individually, and as a couple.”

Hamilton said Engaged Encounter frames the marriage preparation in light of Catholic dogma, but is open and very applicable to mixed-religion couples. Some theological aspects are explained, but the primary focus is on the couples and the vital skills they need to develop for successful marriages.

While serving as a sponsor couple, the weekend retreats actually help the Hamilton’s to relive their own Engagement Encounter, allowing them to see how their own relationship has changed and evolved with each other and with God.

“It is very rewarding to see so many people who love each other work toward being together for the rest of their lives,” said Adrienne Hamilton. “When you are praying together and serving together, you cannot help but feel God’s presence and His love, which strengthens our own relationship and our Sacrament. Not only is the retreat very personal, it truly gives us the opportunity to share our time, talents and treasure with others.”

When it comes to marriage preparation, the Family Life Ministry must work around the fact that we now live in a mobile society, and many couples are separated by distance and life circumstances.

“Some couples are in the military, and others end up in different parts of the country or world due to jobs or educational pursuits,” Monterrubio said. “We have found alternate methods of preparing couples for the Sacrament of Matrimony that involves online or remote learning, as well as the use of available technology to accomplish other important aspects of marriage preparation.”

The Family Life Ministry would not exist without the support of the DSF, said Monterrubio. He thanks the parishes in the Archdiocese who provide DSF support each year.

“This ministry is an ending effort and a costly one, and it is not just about preparing couples to start a life together,” said Monterrubio. “It’s also about teaching people how to have lasting marriages, to keep them alive in God’s plan and to be resistant to culture. Our efforts need financial resources and a creative means to implementing strategies that will allow to serve the communities.”