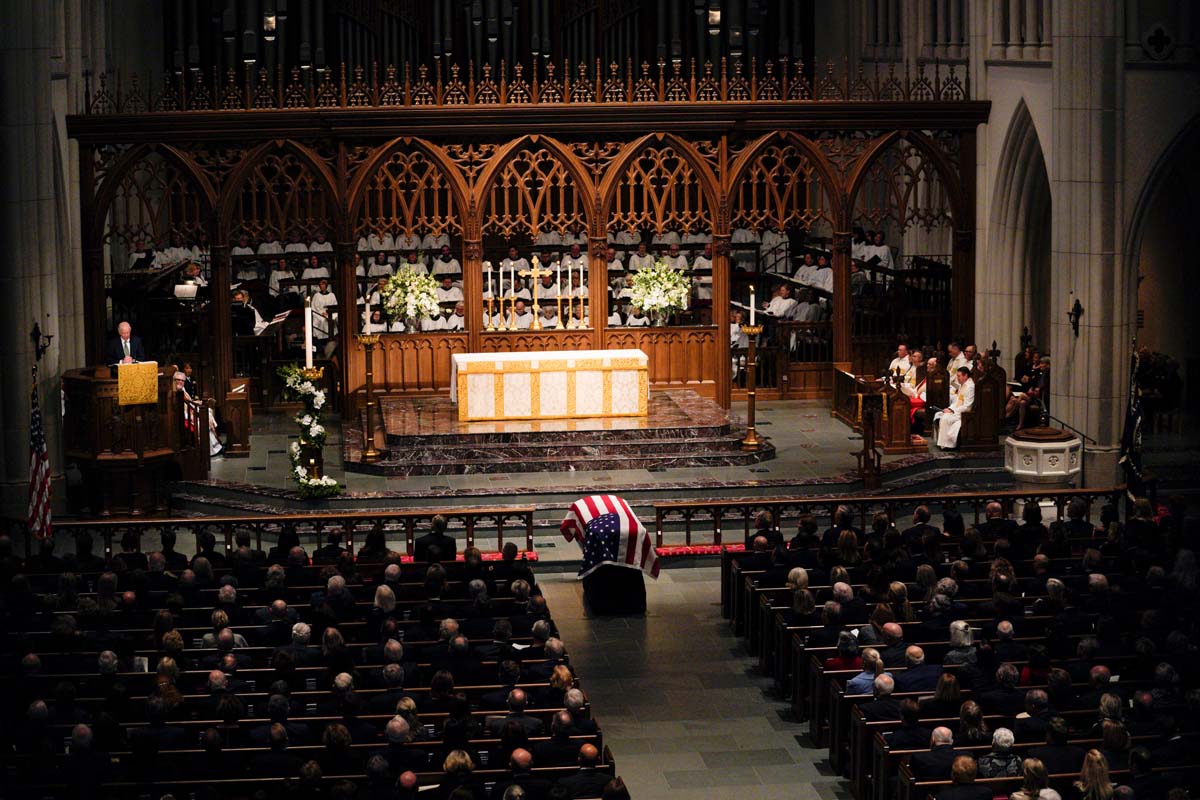 HOUSTON -- Catholic and civic leaders in the Houston area recalled the late George H.W. Bush’s legacy as president, his history as a Houstonian and his faith as a Christian.

“The world, our country and the city of Houston recently lost a courageous man, dedicated leader and selfless public servant,”  Daniel Cardinal DiNardo said of the nation’s 41st president, who died in his Houston home Nov. 30 at age 94. “I join the faithful of the Archdiocese of Galveston-Houston in offering prayers and condolences to the entire Bush family.”

Cardinal DiNardo, head of the Texas archdiocese, said Bush’s career in the public eye -- from the Lone Star State to the global stage -- was marked by incredible statesmanship and honor.

“His strong faith in God, devotion to his wife of 73 years, the late first lady Barbara Bush, and his boundless love for the covenant of family served as a model for all to follow,” he said. “The city of Houston was very proud to call him one of our own and one of our brightest points of light. We will forever be grateful for his presence and commitment to our community and to the people of Houston. May the glory of the risen Lord transform our sorrow into serenity.”

Cardinal DiNardo and his predecessor, Archbishop Emeritus Joseph A. Fiorenza, sat in the front row at St. Martin’s Episcopal Church in Houston Dec. 6 for the funeral services for the late president.

A day earlier, the Episcopal Church’s Washington National Cathedral was filled to capacity for a state funeral for Bush, which followed him lying in state in the U.S. Capitol Rotunda.

At the cathedral the front rows were taken up by Bush’s children, grandchildren and great-grandchildren. His oldest son, former President George W. Bush, delivered an emotional eulogy. Also in attendance were President Donald Trump and first lady Melania Trump and former presidents Barack Obama, Bill Clinton and Jimmy Carter and their spouses.

After the funeral Bush’s casket was taken to Joint Base Andrews just outside Washington for a departure ceremony and his return to the Houston area.

Following the funeral service at St. Martin’s, a motorcade moved his casket to the Union Pacific Auto Facility in Spring, Texas, where it was placed into a customized rail car of a funeral train featuring glass window panes on both sides.

From Spring, the train was traveling to College Station through several Texas small towns, with the car’s windows offering people views of his casket. Bush was to be interred on the grounds of the George H.W. Bush Presidential Library and Museum, near the graves of his wife, Barbara, and their daughter Robin, who died of leukemia at age 3.

“He was certainly a full citizen for the city of Houston in the sense he participated in so many important events in the community, including the sports activities,” Archbishop Fiorenza said of the late president. “He was not only an outstanding president, he was outstanding citizen and ambassador for Houston.”

“His motto for being a successful person was about being of service to others, and his life was a very powerful witness to that notion,” Archbishop Fiorenza told the Texas Catholic Herald, Galveston-Houston’s archdiocesan newspaper. “If we want to be successful, no matter our occupation, we will always be successful when we are in service to others.”

Bush and the first lady were “very religious people,” according to Archbishop Fiorenza, who began serving as bishop of what was then Galveston-Houston Diocese a few months after Bush was re-elected as vice president in 1984.

The couple attended St. Martin’s Episcopal Church for more than half a century.

“They practiced their faith by being in service to others,” Archbishop Fiorenza said. “Their actions and commitments were all motivated by faith and family, and that is a witness for all citizens to follow. Faith is not just something carried out on Sundays but carried out in daily lives. The president and the first lady were testaments to that life of faith and family and service to others.”

Houston Mayor Sylvester Turner said Bush “served with valor and integrity” and said he was a “most esteemed and relatable” neighbor to Houstonians.

With Bush well-known for his seat behind the Houston Astros’ home plate in Minute Maid Park, Turner said he and Barbara were the city’s sports teams’ “biggest fans” and “boosters for everything Houston.”

When Barbara died in April, Archbishop Fiorenza noted the first lady’s tireless advocacy of literacy and said she had visited the archdiocese’s inner-city Catholic schools.

After Hurricane Harvey, Bush joined four other living former U.S. presidents, including Carter, Clinton, the younger Bush and Obama to raise $42 million to benefit those impacted by the 2017 hurricane season, including Hurricane Harvey.