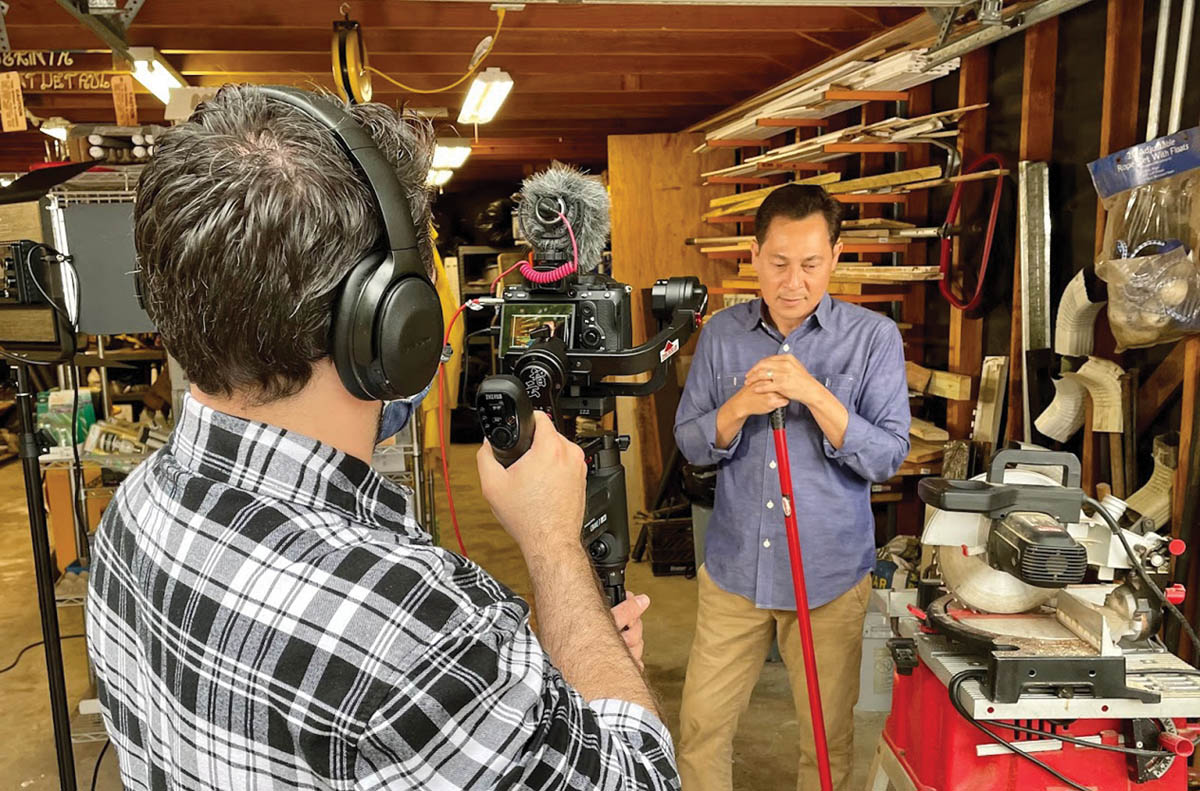 Deacon Ly Nguyen hopes the series will allow viewers to come to love St. Joseph as he does and to recognize his contributions to our faith. Watch the series online at www.archgh.org/familylife. (Photo courtesy of Deacon Ly Nguyen)

HOUSTON — Deacon Ly Nguyen spends a lot of time around teenagers. He has three of his own (“Please pray for me,” he jokes), and he works with young people at Our Lady of Lourdes parish’s youth programs. One thing he’s learned from the experience: Teens want spiritual guidance. They just want it in a way that feels relevant to them.

“Sometimes they feel ‘the Bible is about someone else. It’s not about me,’” he muses.

And that’s part of why he launched a web series about St. Joseph. When everything shut down last year because of the COVID-19 pandemic, Deacon Nguyen saw how everything migrated to an online space.

While that might have come as a shock to Baby Boomers and some Gen-Xers, millennials were already living a lot of their lives online — chatting with friends via apps, gathering their news and views of the world from social media sites, sharing what was going on in their own lives with photos, videos and memes. He realized that if spiritual lessons could take place on teens’ online turf, they might be more receptive to the messages.

Concurrent to the pandemic, Pope Francis announced The Year of the Family, celebrating the beauty and joy of love in the family. “Amoris Laetitia” kicked off on March 19 — St. Joseph’s feast day — and will conclude next June. This year also happens to be The Year of St. Joseph.

For Deacon Nguyen, it was all something of a perfect storm.

“There’s probably never been a time where there has been such an immense void, or at best confusion, about authentic manhood,” he shared in an email discussing his video series. “It manifests itself in the many ills of our society today — young men falling into delinquency because of not having someone to guide them into a purposeful life and future, or young women having to consider the path of abortion because their boyfriends or ‘men’ have abandoned them to venture alone, or even our own children leaving the Catholic faith because of not having a strong spiritual leader at home.”

And what stronger spiritual leader could there be, he felt, than St. Joseph? Nguyen has a special devotion to the saint, who he feels embodies both humility and strength. He’s drawn to the iconic image we see every year on Christmas cards, of Mary, the mother of Jesus, atop the donkey, with Joseph walking beside it, leading his pregnant wife to Bethlehem.

“He’s a strong protector in that moment,” says Nguyen. “He is guiding. He is standing beside his wife.”

The image and lesson of a caring, protective father is reflective in Deacon Nguyen’s own life. An immigrant from Vietnam, he watched his parents sacrifice as they came to the United States to build a better life for themselves and their children. In Vietnam, Deacon Nguyen’s father had been a professor, but here, he took the job of a busboy to provide for his family. That kind of sacrifice is something Nguyen appreciates and says is evident in St. Joseph as well.

“He put aside his own plans and wants for himself to support Mary,” he explains. “God’s plan was that Mary would be the mother of God and that Joseph would be her spouse and Jesus’s earthly father. What an awesome responsibility. But it would have been unusual at the time for a man to support a woman so fully.”

Helping young people see St. Joseph as a role model is useful for both boys and girls, he says.

For young men, it demonstrates how to be selfless and supportive. But for young women, it gives them a glimpse of what kind of man they might want as a partner in their own lives.

Deacon Nguyen’s video series covers these topics and others, including St. Joseph’s acts of service, his leadership within his family, how his actions are those of active prayer, and his righteousness.

The segments are engaging and designed to help others dig more deeply into the life of a man so often seen less for himself but within the context of his relationships with Mary and with Jesus.

“It’s a lot of work!” Deacon Nguyen says with a laugh about creating the videos. “You don’t think there could be that much work when you’re looking at something the kids make on TikTok.”

But the experience has left him “constantly learning,” he says, and that’s been exciting. He hopes the series will allow others to come to love St. Joseph as he does and to recognize his contributions to our faith.

“This isn’t just about the theological aspect of St. Joseph,” he says. “It’s about seeing him in the day-to-day of his life and realizing that the lessons he left for us are still important.”

Deacon Nguyen’s video series can be seen at the Family Life Ministry’s YouTube channel at www.archgh.org/familylife.