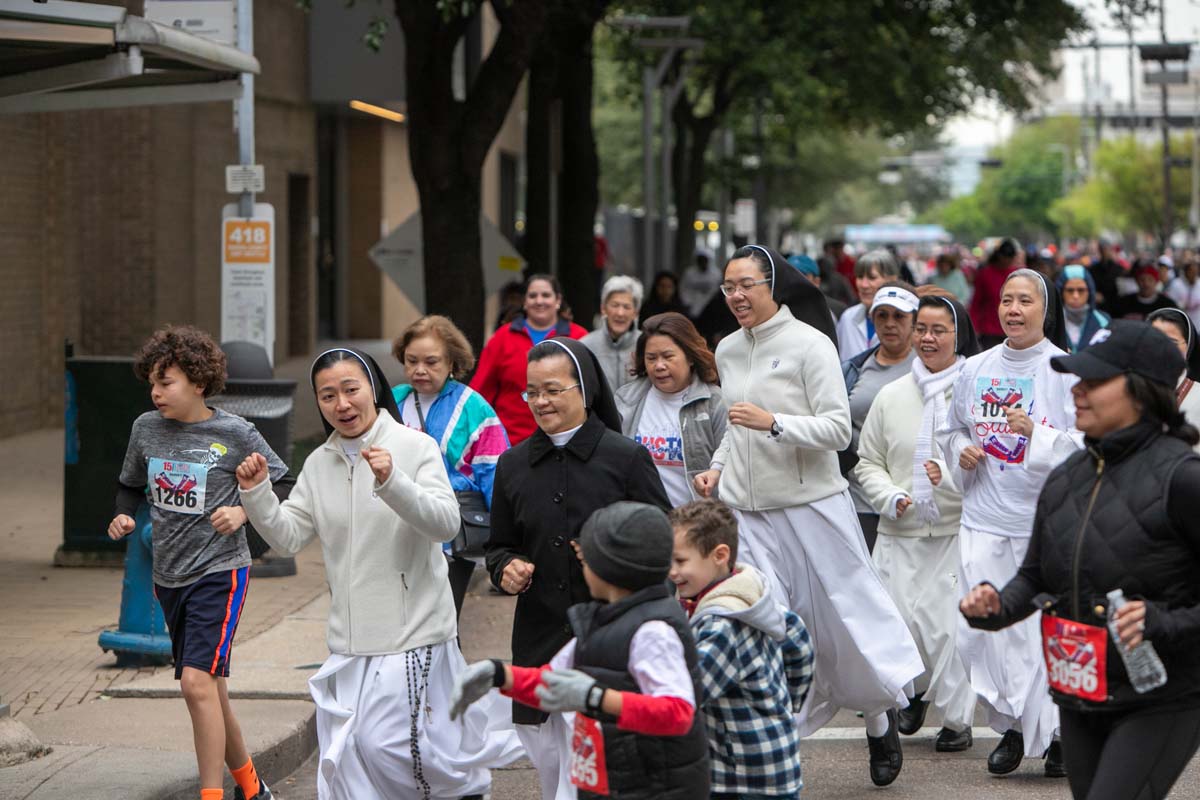 Dominican Sisters of Mary Immaculate Province run alongside students and families during Steps for Students in 2020. The congregation is a longtime supporter of the annual race. (File photo by James Ramos/Herald)

But years before any national fame from cheering on the Astros in the 2021 World Series and throwing out opening pitches, the sisters have participated in another important athletic event — running and walking in the Archdiocese’s Steps for Students 5K in support of Catholic school education.

The large group of about 30 nuns — running three or four together spread out throughout the race crowd — usually catches the eyes of spectators and participants alike with their long white habits and black veils flapping in the wind.

Steps for Students 5K Run/Walk, one of the largest annual Archdiocesan events, is set for Feb. 12 in downtown Houston by the Co-Cathedral of the Sacred Heart.

And the Dominican Sisters of Mary Immaculate Province already have more than 30 of its Vietnamese religious ready to run and walk the course, said Sister Magdalene, who now serves as the local order’s director of its Mission Office.

“The sisters are still signing up for Steps, and I am also organizing our group to attend both the Austin and Dallas March for Life,” she said.

All of those events are interrelated “because we believe in life from natural conception to natural death and education plays an important role in our journey throughout all our lives,” she said.

“When students see their own teachers running or rallying, it brings unity, which is always a beautiful sight to embrace. I am so appreciative of the parents and all their support.”

Sister Magdalene previously had been director of the Mary Immaculate Preschool, which the order founded in 1995 at the convent off Chippewa Boulevard and Antoine off Highway 249.

In addition to helping to support the Houston and statewide community, the Dominican sisters also sponsor more than 1,000 poor children living in Vietnam so they can afford to attend school.

“We tell them that we will walk with them from first grade to college to give them a chance for a good education. But they also have to work for it and want it,” she said.

Sister Maria Theresa Kim Hong, OP, provincial superior, said her sisters, whether they teach or do other duties, are very supportive of their Houston-area students as well.

“For more than a decade, many members of my religious community have participated in Steps for Students with so much enthusiasm,” Sister Maria Theresa said.

“Annually, we would rise very early to pray Lauds (morning prayers), attend the Opening Mass at 6:30 a.m. at the Co-Cathedral for Steps and then make our way to the starting line!”

“I participate in Steps for Students because it supports Catholic education, and I love my students at St. Laurence Catholic School,” Sister Joanna said.

“St. Laurence strongly encourages students to register for this event, and students who raise the most money will receive a reward,” she said.

That includes “sliming the priest” like in the popular Nickelodeon programs. “Students are very excited!” she said.

Sister Joanna said she really enjoys seeing not only her current students at the 5K event but also her older students, who have since moved on to high school, so she can catch up with their progress.

While she has been involved for eight years, the winner in her order for the most years probably goes to Sister Bernadette Nguyen. She has run since the first Steps for Students when it started in 2005.

“So that would mean 17 years ago! I was teaching at an inner-city Catholic school during that time, and it was a much-needed fundraiser for our school,” Sister Bernadette said.

“But most importantly, it was a great event where our students, faculty and staff benefitted from the generosity of so many people in the city of Houston while also having the opportunity to be together as a Catholic school family,” she said.

Now an instructional specialist at St. Cecilia Catholic School in Memorial, Sister Bernadette said, “Steps for Students is also a fun opportunity for us to show our support for all the Catholic schools within the Archdiocese, share the joy we possess as religious sisters and evangelize through our presence at the event.”

The Archdiocesan School Superintendent Debra Haney said, “The Catholic School Office thanks the Dominican Sisters of Mary Immaculate Province for their strong support over the years. We truly appreciate their participation in Steps for Students, but even more so for being such great role models for our students.”

To register or for more information, including deadline dates, www.steps4students.org. †