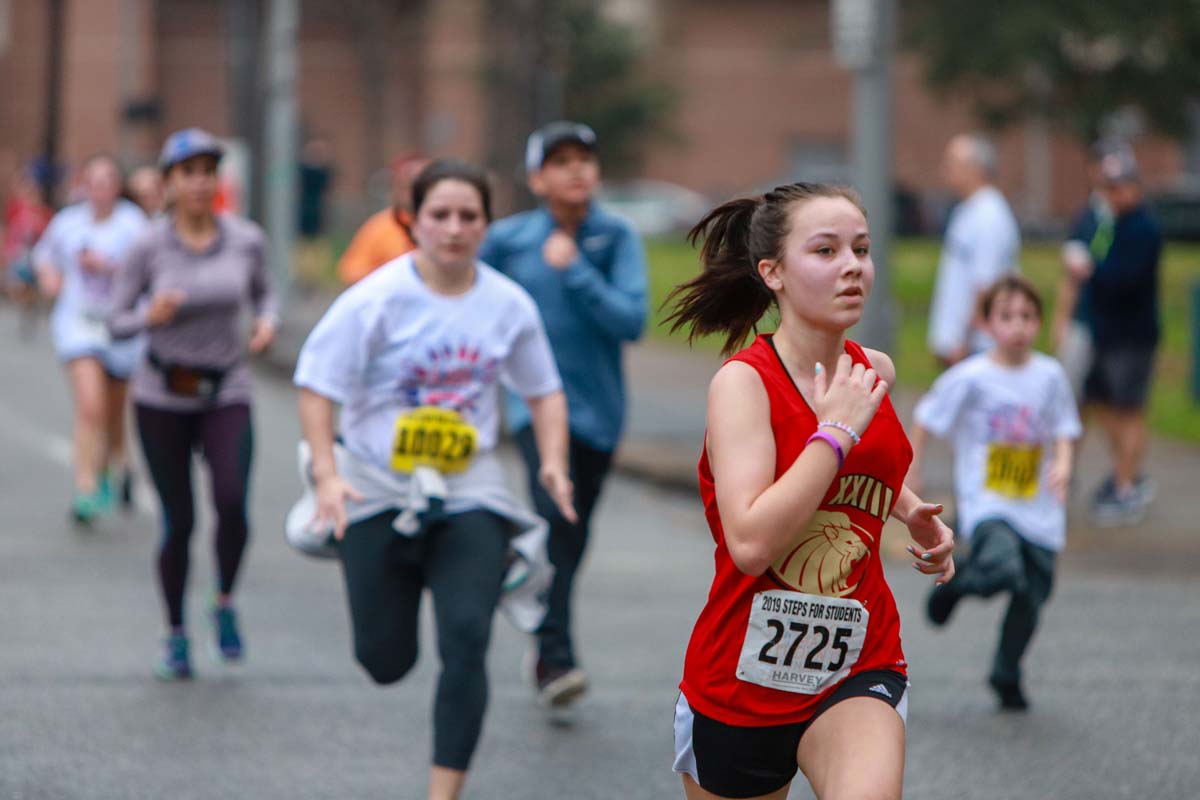 More than 10,000 were registered for the 14th annual Steps for Students 5K Run/Walk in downtown Houston Feb. 16. The event raises awareness and funds for Catholic education in the Archdiocese, and is one of the largest events in the nation of its kind. Photo by James Ramos/Herald.

HOUSTON -- Drizzly, cloudy weather may have prevented plans for a skydiver to land at Steps for Students 5K Run/Walk right before the Feb. 16 start blast, but it didn’t dampen the enthusiasm of more than 10,000 registered runners and walkers.

Students and families, including those pushing strollers, rolled through the start line by the Co-Cathedral of the Sacred Heart in downtown Houston as gold confetti streamed down on them. Some slowed down to greet Daniel Cardinal DiNardo and other officials on the viewing stage.

“Thank you for supporting Catholic education and our Catholic schools!” Cardinal DiNardo told the crowd. He along with Auxiliary Bishop George A. Sheltz, Archbishop Emeritus Joseph A. Fiorenza and Catholic Schools Superintendent Debra Haney smiled broadly and waved to the runners as they jogged by the stage, including the consecrated women religious, with their habits and rosaries flowing as they flew past.

A new President’s Cup initiated this year to increase the number of high school students participating proved successful. Green shirts of Strake Jesuit College Preparatory students and the red shirts and lion mascot of St. John XXIII College Preparatory in Katy were easy to spot, especially when St. John XXIII counselor Heidi Zimmerman Mulroony zipped in as one of the first racers to finish.

The inaugural President’s Cup trophy was awarded to O’Connell College Preparatory School for students traveling from Galveston at 5 a.m. to support Steps for Students. O’Connell principal Patti Abbott said, “We’re excited! We’ll display it in the trophy case with some photos from the race.”

She added, “Our saying is to ‘Commit to the Lord whatever you do, and your plans will succeed,’” from Proverbs 16:3.

‘All our schools together’

Superintendent Haney swung by the booth of KSHJ Guadalupe Radio, 1430 AM, which broadcasted live from the race, to be interviewed by Tim Motte. Haney said, “Thousands of people are waving, cheering and excited to be at the event raising money for our Catholic schools. This is a beautiful opportunity to see all our schools together, working in communion with the Archdiocese for a common purpose that supports schools and families in their efforts to make an excellent Catholic education accessible and affordable.”

Retired ABC 13-KTRK Meteorologist Tim Heller emceed the event, and was glad the rain held off, with only a few sprinkles during the unusually warm February morning.

Catie Watso, a counselor at Our Lady of Guadalupe and Resurrection Catholic schools, said her favorite part of the morning was the sunrise Mass.

“You walk in and see people of all ages in their spirit shirts from all the different schools,” Watso said. “It’s a beautiful picture of the ‘we are many parts, but all one body’ teaching.”

She loved seeing her students, coworkers and families outside the typical school day, she said.

“I have worked on three different campuses in the Archdiocese,” Watso continued. “I have gotten to know people from many more schools over the years. It’s always fun to run into friends and get an opportunity to catch up.”

She’s run Steps for Students every year since she joined the Catholic schools in the Archdiocese, but this year she had her 9-month-old son with her, alongside her husband Todd, who helped push baby A.J. in a stroller. She said her students loved meeting her family, with baby A.J. “full of big smiles.”

“As we walked, he just took everything in,” she said.

Watso said the race is one of the biggest fundraisers at both of her current campuses.

“We work very hard to motivate students to register, to raise funds and to actually show up on race day,” she said. “It’s amazing seeing the fruits of our labor come together and see how much fun everyone has in the process.”

The winning top male and female finishers in this U.S.A. Track and Field sanctioned and certified race were Reese Vannerson of St. Laurence Catholic School and Heidi Zimmerman Mulroony, who is also cross-country coach at St. John XXIII College Preparatory.

Awards were given out by Bishop Sheltz and Superintendent Haney to students in varying age groups. A special award was given to Father Albert Zanatta, pastor of Assumption Catholic Church and School, for being the individual raising the most donations, more than $108,000 by organizing breakfast and dinner fundraisers for Steps for Students.

“We had our church involved because our school couldn’t do it alone,” said Father Zanatta, who temporarily dyes his usually white hair a bright blue, the school’s color, for the race.

Our Lady of Guadalupe Catholic School and Principal Irazema Ortiz, after trying very hard to win the David K. Guite Spirit Award, was overjoyed for her school to be recognized. Appearing on television the week before the race, Ortiz and her students along with a group from last year’s David K. Guite Spirit Award winner Corpus Christi Catholic School were interviewed by Great Day Houston’s host Deborah Duncan on Channel 11 to promote the race.

The David K. Guite Spirit Award, named after a principal and founding member of the Steps for Students steering committee, goes to the Catholic school team that best demonstrated the spirit of participation, creativity and enthusiasm through their team efforts.

“We are truly grateful to our parents and sponsors for their support. The spirit of Our Lady of Guadalupe Catholic School comes from our students, teachers, parents and grandparents with our namesake and God’s blessings,” Ortiz said.

More than $515,000 in donations, $200,000 in registrations $137,000 in underwriting were calculated at press time. More was expected both from registration fees and continuing donations through Feb. 22.

Archdiocese officials thanked all the sponsors, especially the top five generous supporters including Harvey Builders, Scanlan Foundation, the St. Joseph Medical Center, Reliant Energy and Northern Trust. More than 260 volunteers also donated their time and talent to organize and set up the registration, 5K course and other work.

Steps for Students benefits the network of 60 Catholic schools in the Archdiocese of Galveston-Houston, bringing together school communities, parishioners, community partners and runners from across 10 counties to raise funds for school improvements and tuition assistance.