Pursuing a life in service of the faith: Seven new Archdiocesan priests to be ordained in June

The Ordination Mass, which is open to the public, will be livestreamed online at www.archgh.org/live beginning at 10 a.m. on Saturday, June 1. Seating at the Co-Cathedral of the Sacred Heart will be very limited. For more information about vocations, please visit Houston Vocations. 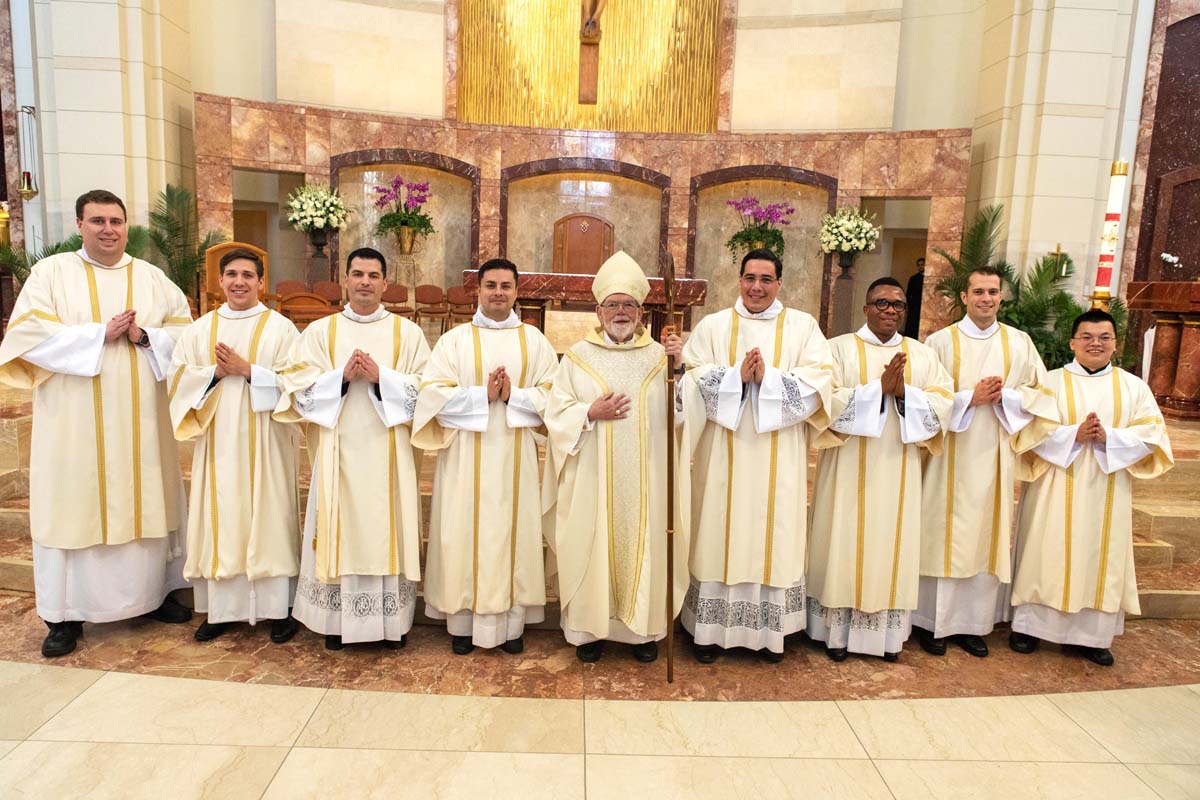 Auxiliary Bishop George A. Sheltz (center) ordained Deacon Justin Cormie Deacons David Michael Moses, Jose Alonso  Ricardo Arriola, Kingsley Nwoko; Ryan Stawaisz; and Vincent Thinh Tran to the transitional diaconate in 2018. These seven men are set to be ordained to the Sacred Order of Priesthood on June 1 at the Co-Cathedral of the Sacred Heart in Houston. Father Steven Huber, CSB, at far left, was ordained with the Basilian Fathers in early 2019. Photo by James Ramos/Herald.

HOUSTON — A desire to serve God. A desire to serve others. The seven candidates for priesthood in the Archdiocese of Galveston-Houston come from different countries and have different stories, but the common thread running through their decision to become priests is the same: they wish to be men of service to others.

The Mass of Ordination will take place at 10 a.m. and while the Mass is open to the public, seating will be limited. To accommodate the wide interest in the Ordination, the Archdiocese will live stream the event online. To view the stream, visit www.archgh.org/live.

All seven are currently deacons, serving in parishes across the Archdiocese and finishing up their final courses at St. Mary’s Seminary in Houston.

“The life of sacrificial love that the priesthood offers me truly expands my heart to love all people with the love of Christ,” said Arriola, who grew up in Guadalajara, Mexico and is serving his diaconate year at St. Ignatius of Loyola Parish in Spring.

The 36-year-old graduated from Universidad del Valle de Atemajac in Guadalajara with a degree in graphic design. He spent a few years working in marketing before deciding to come to the United States to pursue a career in animation. Before that could happen, he was offered the opportunity to become a bilingual teacher with the Alief Independent School District. He found great fulfillment in education, he said, but something was still missing.

“That’s when the Lord invited me to consider the priesthood: something beyond a human accomplishment,” he said. “A rather radical life accomplished by His grace alone, and allowing me to mysteriously cooperate with it.”

Arriola knows his journey to the priesthood has been a lifelong one. He first realized he might become a priest when he was seven or eight years old, then again after he graduated from college, and later still as a 28-year-old who began going to Mass each day before work. Knowing he is finally where God has called him to be, Arriola is excited for his future.

“The priest is an icon of the mercy of Christ among us,” he said, “and when he ministers, truly Christ comes close to us, strengthening us and making us new.”

Cormie, whose home parish is St. John Vianney and who is now serving his diaconate year at St. Theresa Parish in Sugar Land, began his path to the priesthood while working for BP. While employed at the international energy giant’s west Houston headquarters, he said he returned to the Catholic Church after being away since childhood.

“I began to attend Mass each Sunday as well as during the week,” he explained. “I went to confession regularly, prayed the Rosary every day and spent time with our Lord in the parish’s adoration chapel. During this time, I began asking God to reveal to me my vocation.”

After two years of what he called “shutting up and listening for His response,” Cormie said he felt God calling him to be a priest. He applied to the seminary, a process he said took nine months and brought him a sense of peace.

Cormie said that he’s learned a valuable lesson in loving unconditionally during his time at the seminary.

“I have learned just how much I love the Mother Church,” he said. “My love for her is such that I refuse to run away from her because of her imperfect humanity. Instead, it is that very humanity that I run toward in order to serve as priest — to pray for, to bless, to heal, to forgive, to sanctify and to teach.”

Nwoko is spending his diaconate year at St. Charles Borromeo Catholic Church. Originally from Ahiara, Nigeria, he grew up a devout Catholic. One of his most profound memories of childhood is the block Rosary.

“In the Eastern part of Nigeria, which is predominately Catholic, every enclave has a block Rosary at the end of almost each street for moral instructions, prayers and catechism classes,” he explained. “We had one located at the entrance to my father’s compound. I was always there at 4 p.m. every day with my siblings to start the Rosary, and I always led the prayers.”

That’s where he believes God called him to be a priest. Throughout his adolescence, he mentored other children, and he joined the Catholic Charismatic Renewal of Nigeria after high school. He earned a bachelor of philosophy from the Claretian Institute of Philosophy, completed his canonical novitiate year and professed temporary vows with the Missionaries of the Sacred Hearts, and went on to earn his bachelor of theology at Seat of Wisdom Major Seminary.

Nwoko went on to Rome, studying at the Pontifical Institute of John Paul II for marriage and family in Vatican City.
He came to Houston from Virginia Commonwealth University where he was studying toward a Ph.D. Through his work with the Archdiocese, he supports and provides resources to married couples with his enrichment series called “Heart to Heart,” and a discernment series called “Discovering Love with Clarity,” for engaged and dating couples.

“I am grateful to God for His faithfulness and thank all those who have been instrument of support in my journey to priesthood,” he said.

Stawaisz was born in Aberdeen, Scotland and moved with his family around the world before landing in Tomball in 2004, where he and his family worshipped at St. Anne Catholic Church. He first began thinking about entering the seminary while he was studying to be a petroleum engineer at Texas A&M University.

“I met a great group of people there who encouraged me in my faith and inspired me to greater holiness,” he said.

While in college, he was diagnosed with cancer and came back to Tomball for treatment, which included an operation on his hip and a round of chemotherapy.

“Thanks be to God, the cancer went into remission and I continued my studies and formation at A&M,” he said. “After graduation, I realized there was nothing I wanted to do more than to find and follow God’s will in my life.”

Stawaisz is serving his diaconate year at St. Anthony of Padua Parish in The Woodlands, and has learned an inoperable cancer mass has been found in his lung. Steadfast in his faith, Stawaisz calls the priesthood a vocation to love, and said that he knows God has called him to be one.

“My time in seminary has helped me see that God calls people from all walks of life to accomplish His mission,” he said. “He has a different plan for me than for you, but if each of us do our part it is going to make for a great life!”

José R. Alonso, originally from Guatamala, emigrated to the U.S. nearly a decade ago, and worshipped at Prince of Peace Catholic Church in Tomball. He is spending his diaconate year at St. Helen Catholic Church in Pearland. He said he first felt the stirring to become a priest toward the end of high school.

“I began realizing that life was not about money, fame or just success,” he said. “There was more to it. As I began praying about it, I asked our Lord what He wanted for my life, and He answered through the example of my pastor in Guatemala. The more I saw what a priest does, who he is, and to Whom he strives to configure himself to, the more I saw myself as a priest.”

Alonso entered the seminary after he graduated from high school, taking a year to discern whether that was what he wanted. While he toyed with being a doctor, he eventually realized that was not where his life was meant to be. Now 31, his seminary studies gave him a sense of peace that he was following the path God wanted for him. He loves the idea of a life of service, and the giving of oneself to others.

“A priest is called to bring Christ to others in a way no one else can,” he said. “He is an instrument of God’s mercy and compassion in a unique way.”

David Michael Moses grew up attending St. Paul the Apostle Catholic Church in Nassau Bay. He first realized the priesthood might be his life during a silent retreat he attended at the age of 16.

“I remember the priest saying, ‘You should choose the vocation that will make you a saint.’ I immediately felt, although I had a real desire to get married, sainthood for me would come through the priesthood,” he said.

Moses entered college at 14, graduating with his bachelor’s degree four years later. He was accepted to the University of Houston Law School, but ultimately decided to enter the seminary. Now 25, and spending his diaconate year at St. Martha Church in Kingwood, he said he is more excited than ever to serve as a priest.

“The priesthood is all about pointing people to what really matters: our relationship with God and with others,” he explained. “As a priest, you literally give people Jesus through the Eucharist and forgive their sins in Confession. I can’t think of a better way to spend my life.”

Trân is from Vietnam. He came to the U.S. as a college exchange student, arriving in Houston to live with his aunt. He first realized he wanted to be a priest during a homily about vocations at his home parish of Our Lady of Lourdes in North Houston.

“The homilist basically said, ‘Whatever stage of life you are in, if you have some desire to know what the priesthood looks like, come and see our place. After spending time with us, you can later decide whether you want to join us,’” he said.

Trân was studying at Houston Community College when he joined Divine Word Missionaries. He stayed with the organization for seven years, earning his B.A. in philosophy and taking two years of theology.

Spending his diaconate year at the Co-Cathedral of the Sacred Heart in Houston, he said, made him realize that the priesthood is the right path for him.

“I feel drawn to the sacramental life of the priesthood, especially to the Eucharist,” he said. “From the altar, priests and the Church’s members find strength and are nourished. Sacraments made everything in life meaningful and beautiful for me.”

For more information on vocations in the Archdiocese, visit www.houstonvocations.com.