Prison doors reopen for the faithful to become conduits of God’s grace, mercy to inmates 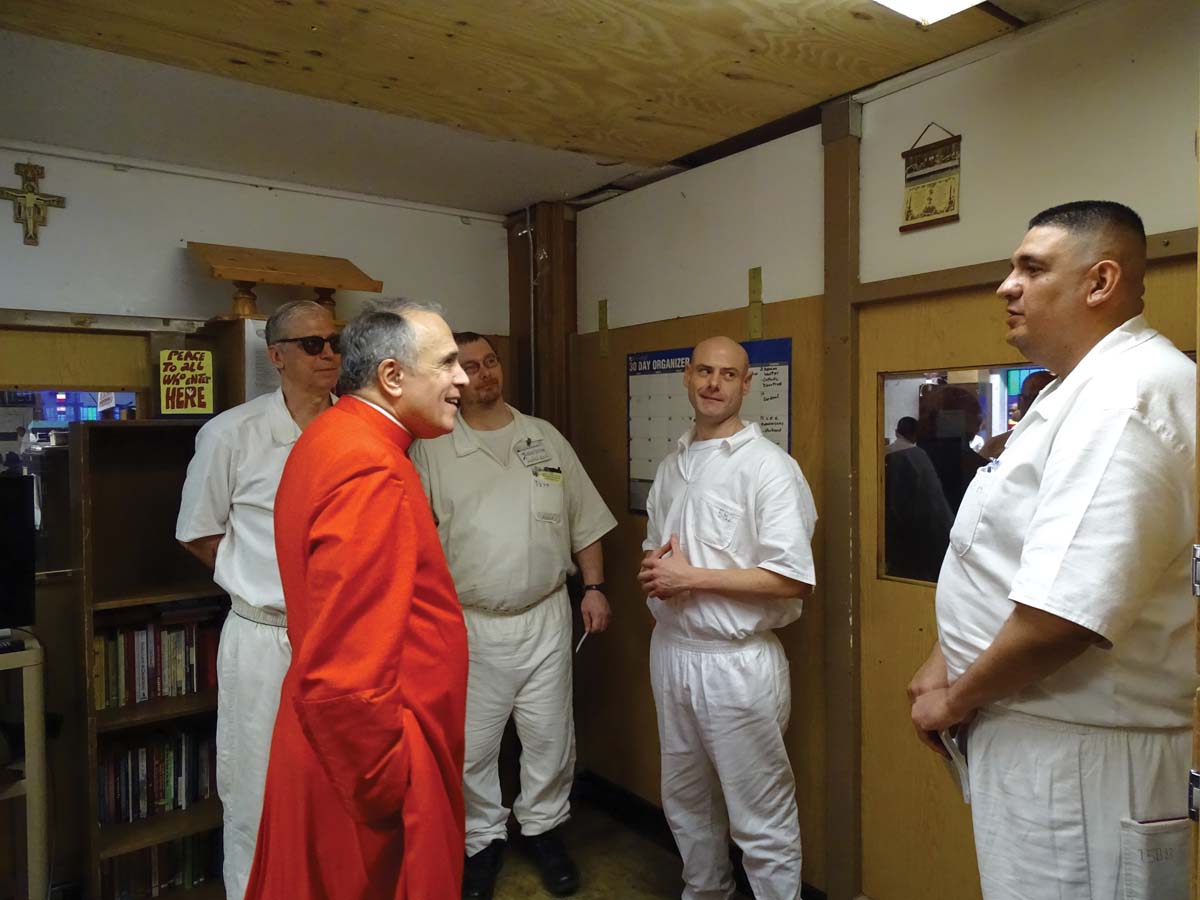 Daniel Cardinal DiNardo talks to incarcerated men just before their Confirmation in the John M. Wynne Unit in Huntsville in 2018. (Photo courtesy of Correctional Ministries)

HOUSTON — With COVID-19 lockdowns now over in state and county prisons, the faithful once again can become conduits of God’s mercy and grace to minister to the 17,000 incarcerated Catholic inmates within the boundaries of the Archdiocese, officials said.

The clergy, staff and lay ministers serving in Correctional Ministries were either shut out completely or had very limited access to the prisons until six months ago. Now, the ministry is revamping its efforts to ensure that the light and love of Christ truly knows no boundaries and reaches the 28% of these incarcerated men and women who are Roman Catholic.

Deacon Alvin Lovelady, director of the Office of Correctional Ministries, said serving in prison ministry may not be considered by many people, but those who commit to making just one visit typically make it a commitment for life. He believes it is the most rewarding ministry he has ever been involved with, even beyond hospital or youth ministries that people typically gravitate toward.

Deacon Lovelady said ministering to the incarcerated is simply just showing up and being present in one’s faith. He has personally witnessed many inmates gain a new awareness or understanding of their faith, and other times, a miracle, he said.

“Being in the jails and prisons since 2009, I have experienced many changes in peoples’ lives, some I would consider a miracle, others just an enlightenment and better understanding of their faith journey,” said Deacon Lovelady.

One encounter with an inmate made a deep impression on Deacon Lovelady before he became an ordained deacon and was volunteering as an RCIA instructor. He learned of an inmate who was receiving the Eucharist at Mass but was not in full Communion with the Catholic Church.

Deacon Lovelady discreetly pulled the man aside and explained the need for him to wait until he was baptized and confirmed. The man replied that he would stop, that it wasn’t a big deal anyway, or so he thought.

The day of the man’s confirmation, Daniel Cardinal DiNardo presided and emphasized the importance of having a deep respect and love for Christ when receiving the Eucharist.

“When this young man came up to the altar during Communion to receive Jesus for the first time as a Catholic, he began to cry,” said Deacon Lovelady. “He tried to walk back to his seat but fell to his knees in front of me asking God to forgive him for receiving Him before without honor and respect.”

In Cardinal DiNardo’s closing comment, he acknowledged the young man as a true example of what it means to be pro-life and how important it is for each person to die to self and respect Christ every time they receive him in the Eucharist.

“He said that none of us are worthy to receive Christ, but He allows it because of His love for us, not necessarily our love for Him,” said Deacon Lovelady. “That day, we were allowed to see the transformation of that love through this new member of our Church.”

Deacon Lovelady said he believed that every volunteer with the prison ministry eventually experiences something like this that makes a profound statement on their own hearts.

In the process of helping to transform the inmates’ faith, their own is strengthened and deepened. He said many times they find themselves asking why it took so long to say “yes” to God’s call to serve the imprisoned. He tells them the answer — it’s always in God’s perfect timing.

Deacon Lovelady said that now may be the ideal time for new and former Catholic volunteers to consider joining the ministry’s renewed efforts as the ministry goes into full swing. This includes Mass and Communion services offered in all of the prison units within the Archdiocese, RCIA classes in most of them, and Bible studies and other classes ramping up as well. He said what the ministry is able to offer depends on the amount of volunteer support they receive.

He said the ministry also could use additional support from the Diocesan Services Fund (DSF) to fill the associate director position that has been open for two years, as well as pay for priests’ salaries and purchase materials, such as Bibles, catechisms, “The Word Among Us,” and other spiritual-reading material for the inmates. He said the associate director would also help him revisit every service and class being offered to make sure they are under control and aligned with Catholic Church teaching.

“We are one people united together to bring Christ to everyone regardless of their present situation. This means we are supposed to invite every person to view our side of the equation, which every person has the right to accept or reject,” said Deacon Lovelady. “We do not force anyone, but we need to make sure the opportunity to see how we cherish our Lord and the Eucharist is, in fact, presented properly and without any flaws; hence it is important that Church doctrine is taught properly without prejudice.”

To apply for a volunteer position, candidates are invited to visit the Office of Correctional Ministries located at St. Dominic Chancery, 2403 Holcombe Blvd. in the Texas Medical Center, Monday to Friday, 8 a.m. to 5 p.m.

In addition to selecting an area of interest (e.g., RCIA, Bible studies, etc.) and taking various Archdiocesan trainings, the office will guide them through the Texas Department of Criminal Justice training and background checks and assignment and gate clearance at a prison facility.

To contribute to the 2022 Annual DSF Appeal that supports the Correctional Ministries and over 60 other ministries, whether direct service or education that require this critical funding to remain in operation, visit www.archgh.org/dsf.

Out of each gift given to DSF, 100% of every dollar goes directly to supporting these ministries.