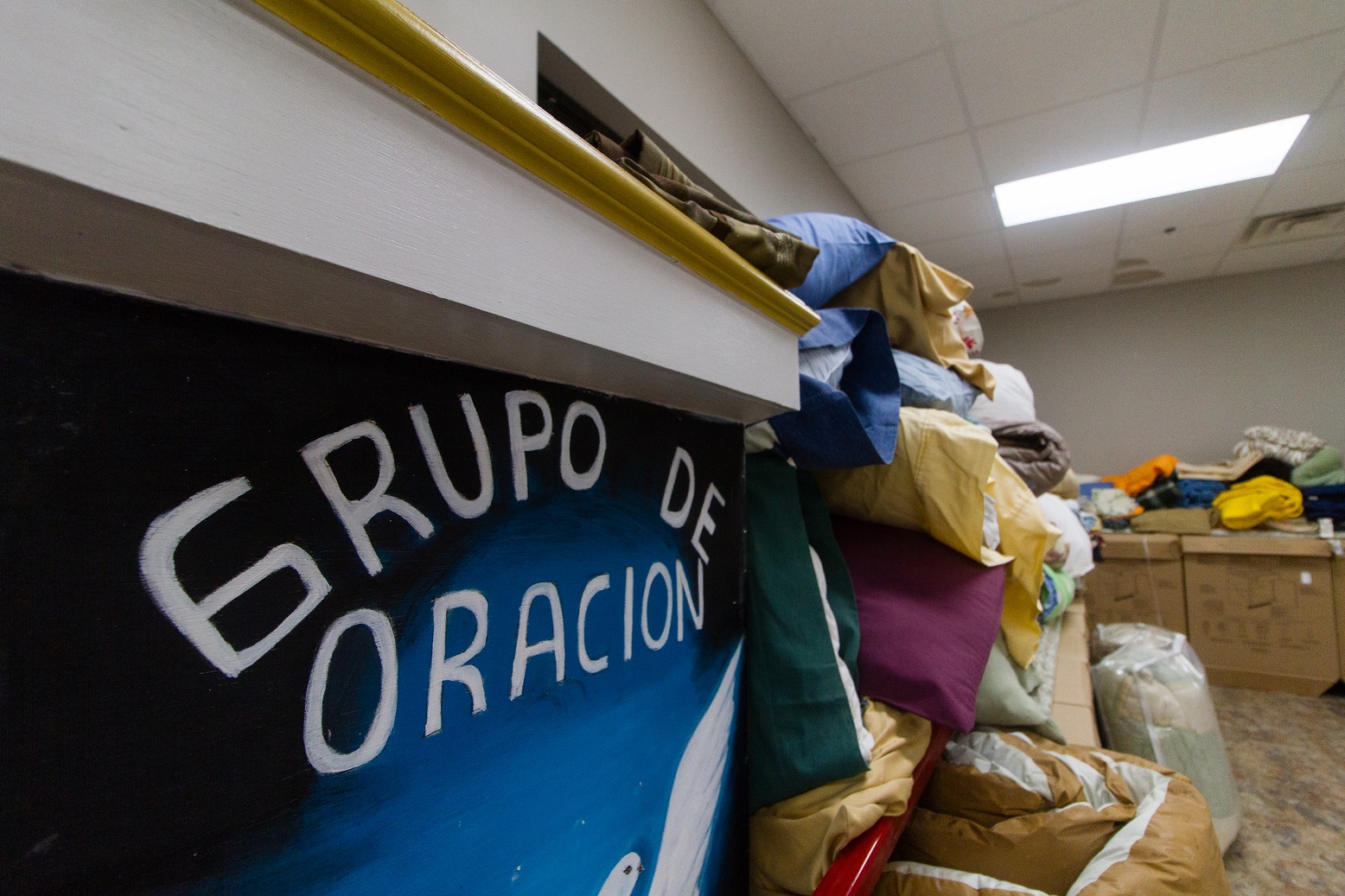 HOUSTON — Seeing the images of Hurricane Florence’s floodwater crashing through communities in the Carolinas is all too familiar for many Texans who endured Hurricane Harvey more than a year ago, including Father Richard Lucien “Luke” Millette, J.C.L., and Father Paul Felix.

Father Millette, the judicial vicar for the Metropolitan Tribunal of the Archdiocese, led the effort in providing pastoral outreach to the hundreds of people, many Catholics and even more non-Catholics, who were pushed from their homes by Harvey’s dangerous floods. Father Felix, whose Annunciation Catholic Church parish is the closest to what was the largest shelter in the city, helped to minister to countless in the George R. Brown Convention Center in downtown Houston. Several other priests and deacons joined them in ministering to parishioners or those in shelters around the Archdiocese.

For Father Felix, the actual anniversary date of Harvey’s landfall is easy to remember because it happened on his birthday. Of course, his parish community — like so many in and around Houston — were already hunkering down for the storm days prior to its arrival.

Father Felix, with his parish staff, were able to arrange Mass at the convention center, then go out into the massive event hall to meet with people, bringing Communion to Catholics who couldn’t attend the Mass.

People spontaneously asked him to hear their confessions, he said.

“It was a mixed group of people; all different kinds of faiths were represented. But people were generally very happy to see us, and Catholics to receive our Lord.”

Father Millette said he would celebrate Sunday Masses at parishes then head out to shelters to be with flood victims.
“I would be in the shelters all day,” he said. “Ministering in the shelters in the aftermath of Harvey was probably pastorally of all the things I’ve done the most difficult, but also one of the most rewarding (experiences I have had) as a priest.”

With the help of Father Chris Valka, CSB, at the Center for Faith and Culture at the University of St. Thomas, he organized ministry efforts for shelters across the Archdiocese.

“I feel like I learned more about pastoral ministry in that period than any other time. It really taught me a lot, because there were people who were truly in need of ministry, and who truly wanted you to be there,” he said. “And, it didn’t matter what faith group they came from. What was important to them was there was someone there who cared about them and wanted to listen to them.”

Father Millette also said people reacted to him differently because he wasn’t a relief official. Because he was there as a minister, they “felt free” to speak with him without fear of losing the shelter and resources available for those displaced.

Father Felix said they would also minister to volunteers, like the hundreds of National Guard deployed to assist across the state.

He distinctly remembers meeting a woman from Africa. She recognized he was a priest, and wanting to pray with her, Father Felix offered prayers in Latin with her, which she recognized and then received Communion.

“I think that was very, very important,” he said, “but it is so important that we as the Church walk with people in these very difficult times.”

“There was just a great beauty in being there and forming these relationships that lasted over the course of weeks, if not months as you continue to take the journey with them,” he said.

According to Father Millette, this intense experience helped him when the shooting at Santa Fe High School happened in May.

“The relationships I formed throughout Hurricane Harvey and the skills I learned were able to better prepare me for how to respond in Santa Fe when I was called on to go and assist there as well.”

But still, even more than a year since Harvey made landfall in 2017, Father Millette knows there is more work to do.
“I think there’s a lot of work to be done to make sure that no one’s left behind, and that those who are still struggling to get back into their homes are acknowledged; they don’t have to act like everything’s better just because we’re a year away from the event.”

Father Felix, a Houston native, spoke of the resilience of the people in Houston during such a massive life-changing hardship.

“I think that’s sort of part of our local culture, here in Houston, and in Texas,” he said. “I think we don’t really sit around and wait for others to cater to us. We kind of get on our feet, and we tackle our problems, and we work together to overcome them. That’s always very encouraging and renewing in our faith in God, and also faith in the goodness He’s placed in His people.”

Thinking of the one-year anniversary, Father Felix remembers that even today families are still living lives that are not back to normal, or that people are still struggling with the consequences of the storm. He encourages the faithful to maintain an awareness that anyone affected by Harvey may still experience difficulty at any time.

“It teaches us that this world really is passing away,” he said. “That the things of this world are not things that we can rely on for our ultimate fulfillment. There are things we need but sometimes people can say, ‘Well, God must be punishing us. Why is God letting this happen to us?’ My response is where would we be in all this without God, without His help? And without the grace that He gives us to help each other.”

This same understanding, that people will continue to bear a cross of suffering post-Harvey, motivates Father Millette to gratefully recognize efforts made to help those in need and to still serve.

“A year out, I would say that the disconnect can still exist, that many people in our city have moved on and feel like life has gone back to normal,” he said. “And, yet there are still numerous people in our cities who are not back in their homes, who are still struggling to put their lives back together. I think it would be easy to expect everyone and think that everyone has moved on to a better place and there’s nothing more to grieve. And yet there’s many people out there who might still be grieving.”

“Looking back, I think we all did very well ... the Church, the city, the first responders, the community,” he said. “I think everyone did the absolute best they could in responding to a situation in which they had no idea what to do and how to do it. I think we need to take those lessons learned and make an effort to learn from what we could do better so that we’re better prepared for the future.”