Lisa May, Director of the Office of Archives 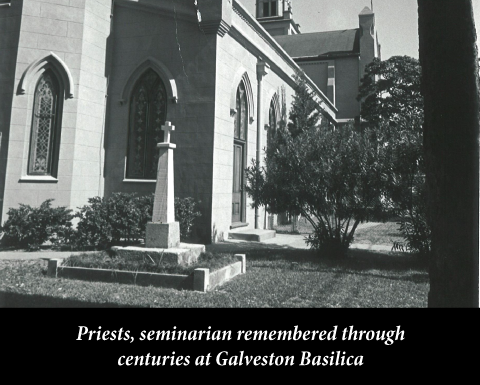 HOUSTON — In October, the United States celebrates American Archives Month. Archives are records of an individual, institution, organization or business.

These records come in a variety of forms, including letters and memos, photographs, maps, diaries, publications and artifacts. Today they also include electronic or digital documents.

This office is able to supply numerous historical accounts of the Archdiocese.

To honor American Archives Month, the office has shared the historical account behind the stone marker that stands outside of St. Mary Cathedral Basilica in Galveston:

Among the many hardships of life in Texas during the pioneer days were epidemics of diseases such as cholera and smallpox. Port cities like Galveston were particularly vulnerable, as ships brought infection with their passengers and cargo. Yellow fever was a scourge of the summer and fall months, spread by swarms of mosquitoes.

The dreaded “yellow jack” hit Galveston hard in the years between 1840 and 1870, killing hundreds of the city’s residents in each outbreak. New arrivals, from northern states or from outside the U.S., were often quicker to catch the disease and less likely to survive it. To the right of the doors of St. Mary Cathedral Basilica in Galveston, a stone column marks the burial site of six victims of one such epidemic in 1853.

Four were priests of the diocese: Fathers Joshua Dixon, Edward Hug, William Metton and Denis O’Driscol. Fathers Dixon and O’Driscol had been ordained just months earlier in the Cathedral itself. A fifth priest, Father Jean-Marie Baudrand, was one of the first Oblates of Mary Immaculate to serve in Texas. The final name included is Jean Pierre Bajard, a seminarian from France not yet ordained a priest but still serving the Church. He had been in Galveston only a few months when he succumbed to the disease.

All six died between September and October in 1853, but only Father Metton’s death is recorded in the Cathedral’s burial registers. The others are remembered in the stone marker that still stands outside St. Mary Cathedral Basilica, more than 160 years after their deaths.