Priests of the Lord: Archdiocese rejoices for three new priests 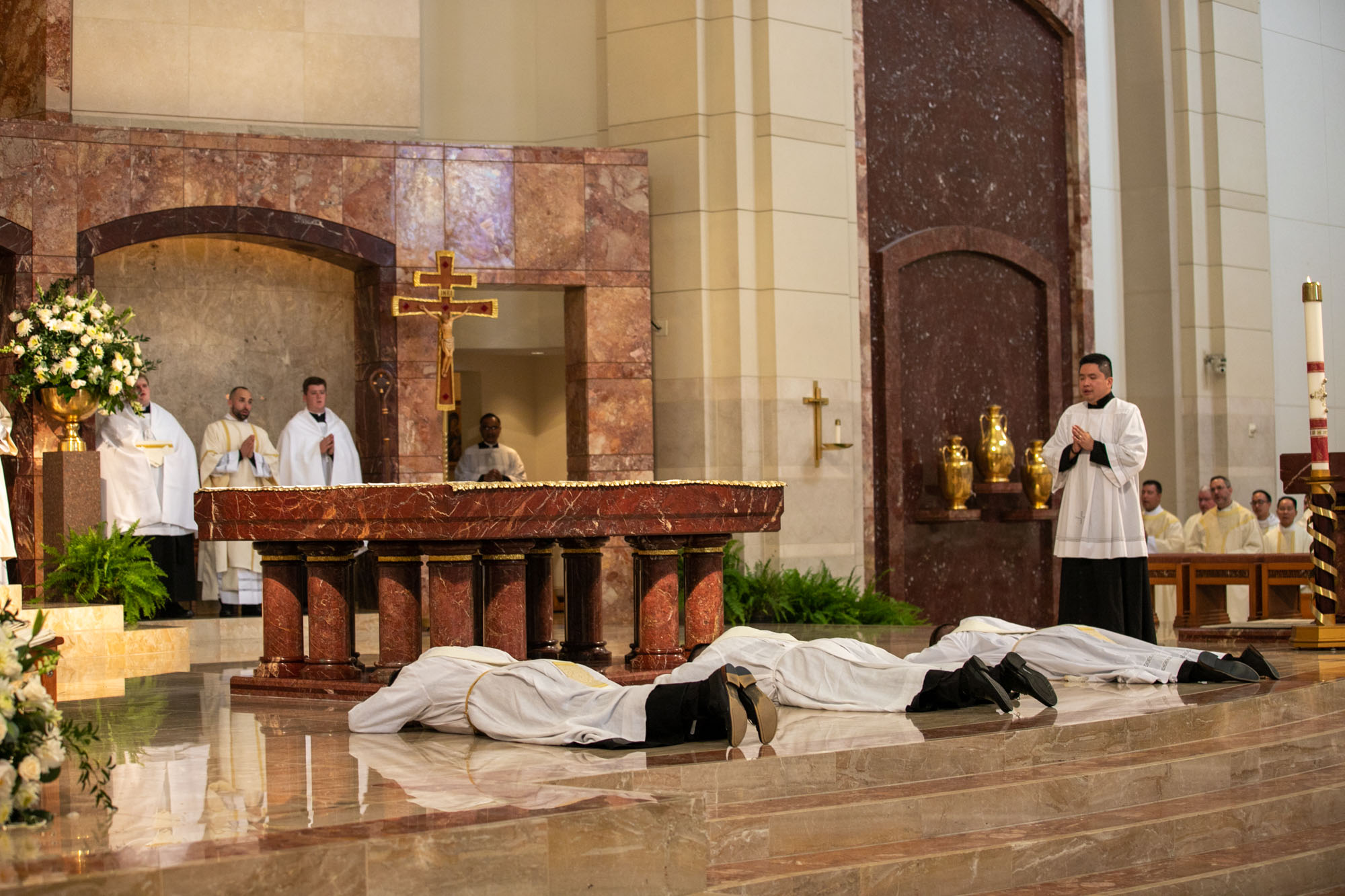 HOUSTON — They entered as deacons and departed as priests.

Father Luis Garcia, Father Christopher Meyer and Father Jacob Ramirez were ordained to the priesthood by Daniel Cardinal Dinardo at the Co-Cathedral of the Sacred Heart in Houston on June 4.

More than 1,200 turned out to witness the occasion, including many beloved family, friends, former teachers, and even a handful of bishops, including Auxiliary Bishop Italo Dell’Oro, CRS, Austin’s Bishop Joe S. Vásquez, and San Jose Bishop Oscar Cantú.

The Mass, already rich in deep symbolism and tradition, carried several intimate and unique moments for the three new priests.
During the investiture of the new ordained priests’ stole and chasuble, Father Ramirez was vested by his uncle Bishop Cantú and his brother, Father Nicolas Ramirez, pastor at St. Frances Cabrini Catholic Church in Houston.

Father Meyer was vested by his high school theology teacher, Father Mark Thibodeaux, SJ, while Father Garcia was vested by Father Norbert Maduzia, pastor of St. Ignatius of Loyola Catholic Church in Spring, where Father Garcia had previously assited with Liturgy and Sacraments.

‘Priests of the Lord’

In his homily, Cardinal DiNardo said the newly ordained priests would leave the ordination Mass as “priests of the Lord.”

“Show your love, feed the sheep,” he said. “Jesus was always very simple in giving responses about the most complex theological issues. How does the priest show he’s a priest? Feed the sheep. It’s very simple, but of course, in practice, that’s very difficult.”

Even in the face of challenges, Cardinal DiNardo reminded the priests that they were never alone.

Cardinal DiNardo told the three men that the community begged “the Church’s prayer upon you as you pursue your priestly life.”

“Remember, when you gather men and women into the people of God through Baptism, the name of Christ, and especially when you draw people into forgiveness in the work of Reconciliation, a work that is particularly yours as priests, do it well, do it generously, do it with patience,” Cardinal DiNardo said. “And be attentive to the weak and the sick.”

He also reminded the three new priests of the journey of growth that lay ahead.

“Even if you already think you know everything right now, you will discover, in a few weeks, you don’t,” he said. “I started this homily by talking about gratitude. Gratitude to your family, gratitude to your seminary formation, gratitude for the gifts of the Sacraments that you will celebrate, gratitude to all your people, the ones with whom you try to make the kingdom of God really palpable in the world.”

Cardinal DiNardo pointed to Pope Francis, who often reminds the faithful, including priests, of the importance of gratitude when living “in a synodal way of life, that is a way of accompaniment for others.”

Since the beginning of his pontificate, the pope has continually called for a Church, with her priests, to walk with and accompany others through life.
“Without God’s revealing grace, insight is not possible. We must be careful not to get locked into the world of our own human natural powers. Our technological world powers, they pose a special problem in this regard. Founded on a deep appreciation for what the Lord has done, show gratitude, be gratitude.”

Cardinal DiNardo closed his homily by reminding the newly ordained of his prayers, saying: “I ask that the Lord bless you and make you men of gratitude as you come forward and are ordained for service in the Church.”

The new priests were set to begin their new pastoral ministries in the Archdiocese.