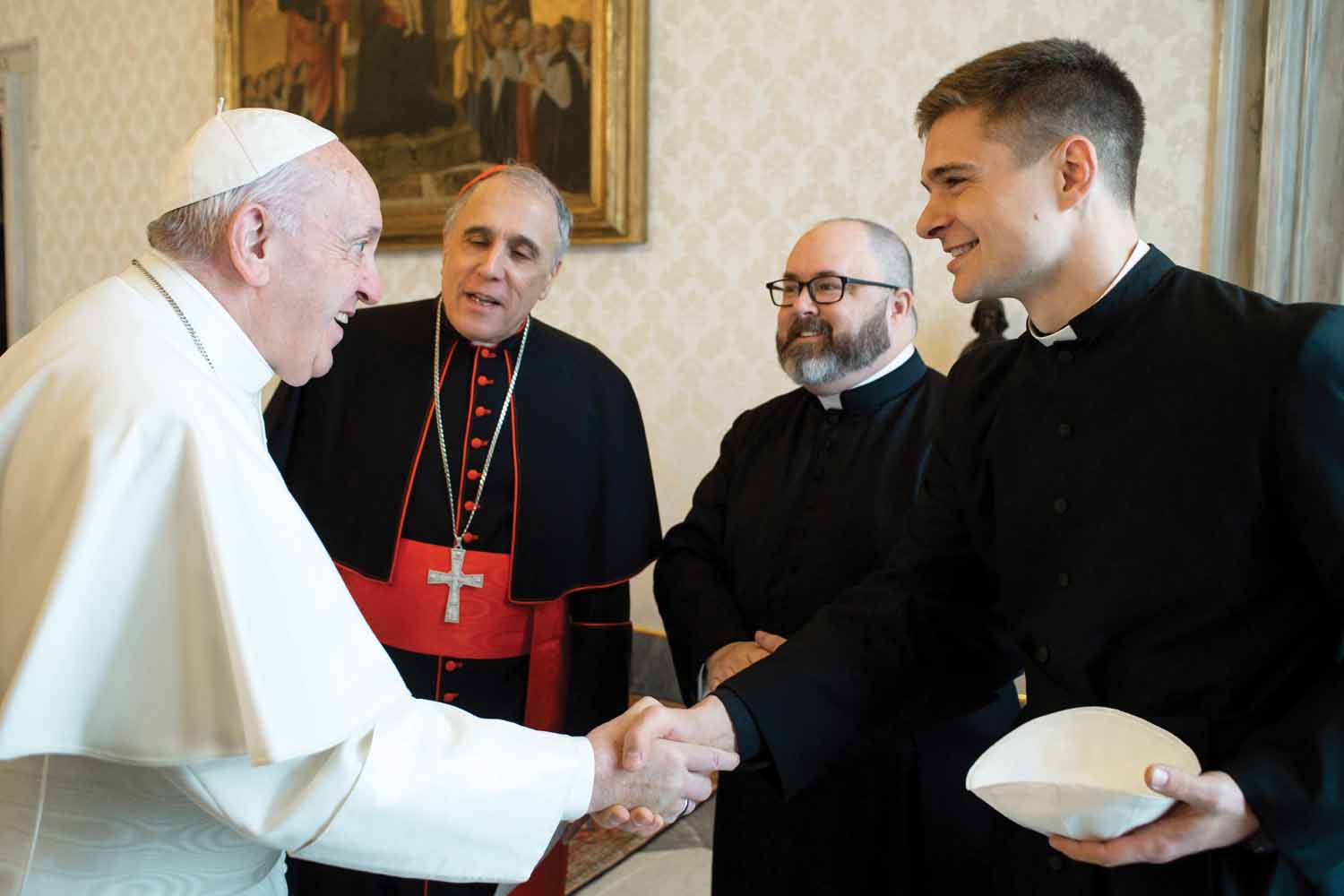 Pope Francis greets Joseph White, a seminarian of the Archdiocese who is studying at the Pontifical North American College in Rome, as Daniel Cardinal DiNardo and Father Michael Earthman look on during Cardinal DiNardo’s and Auxiliary Bishop George A. Sheltz’s ad limina visit Jan. 20 at the Vatican. (Photo by Vatican Media)

ROME — Joseph White had the zucchetto, the colored skullcap worn by clergy, prepared and ready to hand over to the pope before his encounter with Pope Francis during Daniel Cardinal DiNardo’s and Auxiliary Bishop George A. Sheltz’s ad limina visit to the Vatican in January.

As per tradition, faithful famously hand the pontiff a new zucchetto in exchange for the one atop the pope’s head, and if it fits and he likes it, the pope might keep it. If not, he’ll return it and now they have a zucchetto worn, though briefly, by the pope himself.

But that day White, who is a seminarian of the Archdiocese studying in Rome at the Pontifical North American College, had a subtle trick under his zucchetto.

On the inside of the skullcap, White stuck two logos of two sports teams and a Spanish note: ‘Tu equipo’ (Your team) above the logo of Argentina’s San Lorenzo de Almagro, widely known as the pope’s favorite soccer team, and the image of the Houston Texans bullish logo with ‘mi equipo, or ‘my team.’

Witnessing the exchange, Cardinal DiNardo smiled as the moment arrived and White turned over the skullcap, bottom side up, and handed it to the pope. The deed had worked: seeing the logo of his beloved Argentinian team drew a huge smile across the pope’s face as he put it on.

While it perhaps was a simple gesture and moment among a major visit of a group of U.S. bishops, White said the pope “truly modeled ... how to be a joyful servant in the vineyard of our Lord.”

After the bishops from Region X, which includes Arkansas, Oklahoma and Texas, were seated, the pope addressed a group of seminarians and priests from the region. He approached them, as many of them gathered around to hear what the Holy Father had to say.

The pope “encouraged all of us the priests and seminarians to keep our sense of humor and serve the Lord joyfully,” White said.

White, along with Father Michael Earthman, a priest of the Archdiocese who is studying at the Institute of Liturgy at the Pontifical University of the Holy Cross in Rome, joined Cardinal DiNardo and Bishop Sheltz in visiting holy sites around the Vatican. For White, the visit re-affirmed his desire to serve the Church as a priest, especially those in Galveston-Houston.

White, whose home parish is St. Michael Catholic Church in Lake Jackson, said he is preparing for his ordination to the priesthood, when he will profess his promise to Cardinal DiNardo that he will serve the Church as a priest to “serve God’s people under [Cardinal DiNardo’s] leadership.”

After his encounter with the Holy Father, White said he remains fixed on being a “joyful” companion to Cardinal DiNardo.

“In light of this entire experience, I have rededicated myself to be a joyful and loyal companion of Cardinal DiNardo and his successors in the Lord’s vineyard of Galveston-Houston.”

Ad limina, which is shortened from ‘ad liminina Apostolorum,’ (translated as: “to the threshold of the Apostles”) is a pilgrimage made by each bishop in the world to the Vatican every five years.

According to Father Earthman, who was ordained in 2007 and is now a doctoral student, the three main efforts of a bishop on their ad limina visit are to pray at the tombs of the apostles Sts. Peter and Paul; personally meet with the Holy Father; and advise the pope about the activities and current situation of each local Church served by that bishop.

Father Earthman, who has been studying in Rome for the past four years, saw the ad limina visit as a “good” way to begin his final semester of study in Rome.

“It was a good reminder to me that — for the bishops of Region X — they were on pilgrimage,” he said.

During the visit, Cardinal DiNardo and Bishop Sheltz would celebrate Mass at each of the four main papal basilicas: St. Peter, St. Paul Outside the Walls, St. Mary Major and St. John Lateran.

While Father Earthman had celebrated Mass at these basilicas before, this time it was a “homecoming” of sorts for him. Former seminary formators were now bishops and his seminary classmates were also attending the ad limina. After each Mass, the bishops, priests and seminarians all prayed at the relics of St. Peter, St. Paul, the Crèche of Christ, and “before the Cathedra of Rome,” all prayed for their dioceses back in the U.S.

Father Earthman said Cardinal DiNardo preached in his homily during Mass celebrated at the tomb of St. Peter that “each bishop’s ministry in the Church will not bear fruit apart from one’s communion with Peter — that is, the Bishop of Rome.”

Father Earthman said the timing of the visit was divinely appointed, considering the “severe difficulties and challenges facing the credibility of leadership in the Universal Church” and in U.S. dioceses.

He said the ad limina visit runs counter to the American culture that often emphasizes “going it alone,” because during the meeting, Cardinal DiNardo and Bishop Sheltz reaffirm their communion with Rome and its bishop, Pope Francis.

“The Lord Jesus Christ has not abandoned his Church — even in the midst of crisis,” Father Earthman said. “Nor will He.”

Father Earthman said his time accompanying the bishops at Mass allowed him to pray for them personally “for their own ongoing conversion to the Lord Jesus Christ and for the renewal of each of their dioceses” and appreciated his chance to study and live in Rome, as he looks forward to offering the “fruits” of his labor for the Galveston-Houston Archdiocese and the wider Church.