Prepare for heaven with faith and good works, pope says 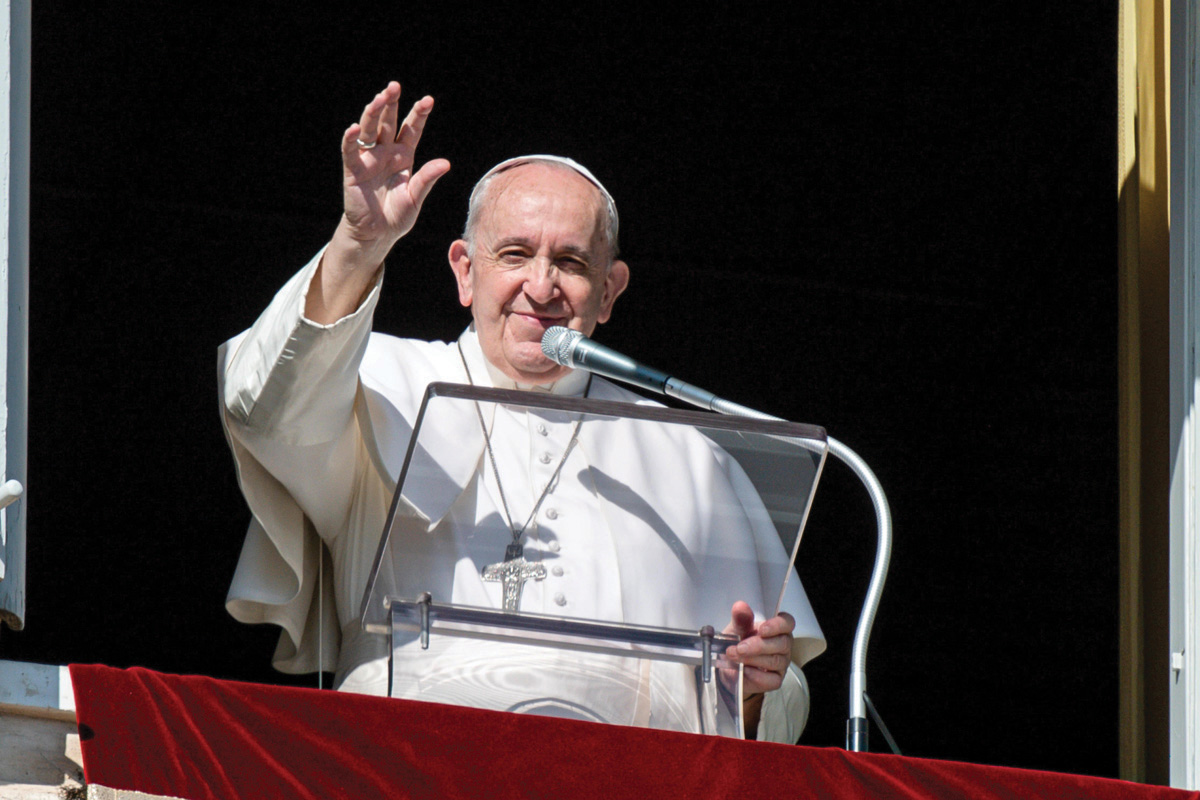 Pope Francis greets the crowd as he leads the Angelus from the window of his studio overlooking St. Peter’s Square at the Vatican Nov. 8. The pope said people sometimes forget that life’s ultimate purpose is preparing for the kingdom of heaven. (CNS photo)

“People do everything as if they will never depart for the other life. And so, people care only about possessing, of standing out, settling down,” the pope said in his remarks before praying the Angelus with visitors gathered in St. Peter’s Square Nov. 8.

The day’s Gospel reading offered an ongoing reflection on eternal life, he said.

The reading from the Gospel of Matthew said the kingdom of heaven will be like 10 virgins who went to a wedding feast with their oil lamps.

Those who were wise brought extra oil, and those who were foolish did not. The delayed groom arrived while the foolish ones were out getting more oil, so they found themselves locked out of the feast and were admonished for not being prepared.

Pope Francis said the parable explains how Jesus tells people they must be prepared — both for Jesus’ final coming and in their daily commitment to meeting Him through charity to those in need.

“The lamp of faith is not enough; we also need the oil of charity and good works,” he said.

“Being wise and prudent means not waiting until the last moment to correspond to God’s grace” with good deeds, but to convert now, he said.

“Unfortunately,” the pope said, “we forget the purpose of our life, that is, the definitive appointment with God, thus losing the sense of expectation and making the present absolute.”

“If we allow ourselves to be guided by what seems most attractive to us, by the search for our interests,” he said, “our life becomes sterile; we do not accumulate any reserve of oil for our lamp, and it will be extinguished before the Lord’s coming.”

People of faith must be vigilant and correspond to God’s grace by doing good every day, “so that we can serenely await the bridegroom’s coming” and “pass through the night beyond death and reach the great feast of life.”

At the end of the midday appointment, Pope Francis offered his prayers for those hit by a violent hurricane in Central America, and he expressed his concern over reports of increased fighting in Ethiopia.

Inviting all sides to come to a peaceful resolution through respect and dialogue, he also said he hoped dialogue underway in Libya would help bring stability and peace to the country.

Noting that Nov. 8 was Thanksgiving Day, the pope recalled how important water is for life and for agriculture and, as such, water must be treated as a universal good.
The pope also expressed his closeness to and prayers for rural residents and small-scale farmers whose work is even more important at “this time of crisis.”