Prayers, aid offered amid floods as parishes grapple with Harvey 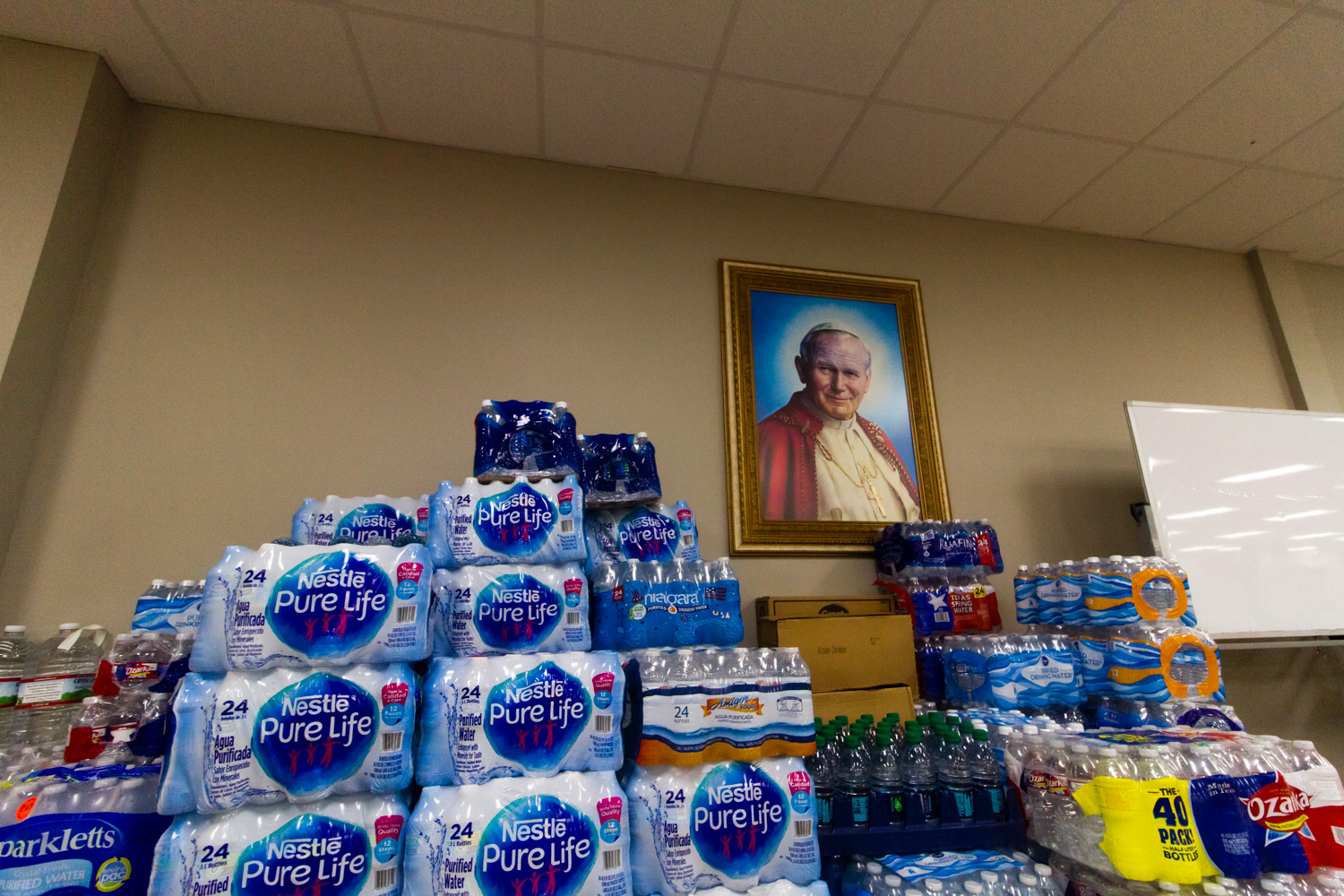 Cases of bottled water surround an image of St. John Paul II at an evacuee shelter Aug. 28 for people displaced by Tropical Storm Harvey at Sacred Heart Catholic Church in Conroe. The north Houston parish opened its doors when the massive storm crippled the Galveston-Houston region with continuous rains, causing rivers to overflow their banks and prompting mandatory evacuations. Photo by James Ramos/Herald.

HOUSTON -- Father Norbert Maduzia only had bad news for his parishioners in Spring, closer to Houston. Via Facebook Live, the pastor of St. Ignatius of Loyola Parish showed a church in devastation.

Floodwaters covered the altar floor, nearly reaching the top of some pews.

Walking back to the narthex, he showed that the "baptismal font meets the floor and the water."

"I didn’t know what to think," Father Norbert later said. "I went numb seeing the destruction in the church. The water was over the sanctuary level in the church. We have a sloped floor and so the water level from the back of the church, the baptismal area, was equal in height in the sanctuary."

"Christ was sharing in the passion of His people. He, too, was now homeless, off the cross, and broken as are many through these floods.​"

At one point in the video, Father Maduzia picks up the parish processional cross, face down in the water. The corpus then breaks off and floats for a few seconds until Father Khoi Le, parochial vicar, picks it up and places it on a nearby table.

"I’ve prayed about that image and realized Christ was sharing in the passion of His people," Father Maduzia said. "He, too, was now homeless, off the cross, and broken as are many through these floods.​"

He said the parish has received messages of prayer and concern from across the world. Nearby churches and even a mosque has offered space to celebrate Mass. The video, viewed more than 464,000 times by Wednesday morning, shows the clergy and staff saving vestments and other parish property.

Further up the road in Conroe, the 200-home community of McDade Estates down the road from Sacred Heart Catholic Church had just hours to evacuate Aug. 27. City officials knocked door-to-door, alerting residents to escape to higher ground.

Hours later, authorities released historic amounts of water from Lake Conroe as Tropical Storm Harvey continued to flood southeast Texas with as much as 50 inches of rain. Lake Conroe surged past record numbers, forcing city officials to advise more neighborhoods to evacuate as the San Jacinto River churned with floodwaters through Conroe.

Less than three miles away, surrounded by donations of clothes, water and food, Father Philip Wilhite, Sacred Heart Church's pastor, said they opened an emergency shelter at the parish to house flood victims Aug. 28. The shelter served many of the communities, some less than two miles from the church, flooded by the rising San Jacinto.

Despite the rain, Father Wilhite said "this has been very joyful, to see people come together all in good spirits, doing what we can to help each other."

Sacred Heart joined a number of parishes, including St. Anthony of Padua Parish in The Woodlands, throughout the 10-county Archdiocese of Galveston-Houston that assisted with flood relief as emergency shelters or donation sites Aug. 29. Shelters across the region served thousands of people including a downtown convention center housing about 10,000 people by nightfall.

Father Tom Rafferty, pastor of St. Anthony of Padua, described the response to help as "outstanding" and "generous."

"I try to share with them what the church is, and they're embracing it. You see it all across Houston," he said.

Elsewhere, the Discalced Carmelite Nuns of New Caney, Texas said they are praying for Harvey flood victims and aid workers.

"We have been praying every minute for all the people in the Archdiocese and the people in Texas, especially for those seeking shelter and for those who are helping them," Sister Angel Teresa Sweeney, superior of the contemplative community. The small convent, located 37 miles northwest of Houston, found itself less than three miles from a major 12-mile stretch of I-69 that was closed because of high water.

Sister Sweeney said the convent saw 23 inches of rain that caused nearby Peach Creek to rise to a record height, flooding nearby homes. But after seeing damage from the 2016 Tax Day Flood, the seven sisters readied their property with a pump and equipment to handle floodwater, which Sister Sweeney said worked steadily.

In Richmond, Texas, 30 miles southwest of Houston, Sacred Heart Parish served as a shelter until the Brazos River also began to flow past its banks. The parish closed after authorities ordered mandatory evacuations for much of Fort Bend County. The river was expected to rise through Aug. 31, cresting at 57.5 feet, 42 feet above normal.

Near Galveston Island, in Dickinson, one of the hardest hit communities, The Shrine of the True Cross Parish and School was inundated by at least four feet of water. The parish sits less than 500 feet from Dickinson Bayou and is home to a relic of the True Cross, which church officials said was safe. Photos show the submerged parish campus, including a grotto with a statue of the Mary just above the waterline.

Harvey remained a deadly storm Aug. 30, keeping several counties under storm and surge warnings with 'historic river and bayou flooding,' according to the National Hurricane Center. The storm has claimed at least 30 fatalities in region.

How you can help

Hurricane Harvey brought widespread flooding and damage throughout the Archdiocese. Many families will need short-term and long-term recovery services to rebuild their lives. And you can help.

You can also donate to Catholic Charities of the Archdiocese of Galveston-Houston and to the Society of St. Vincent de Paul.