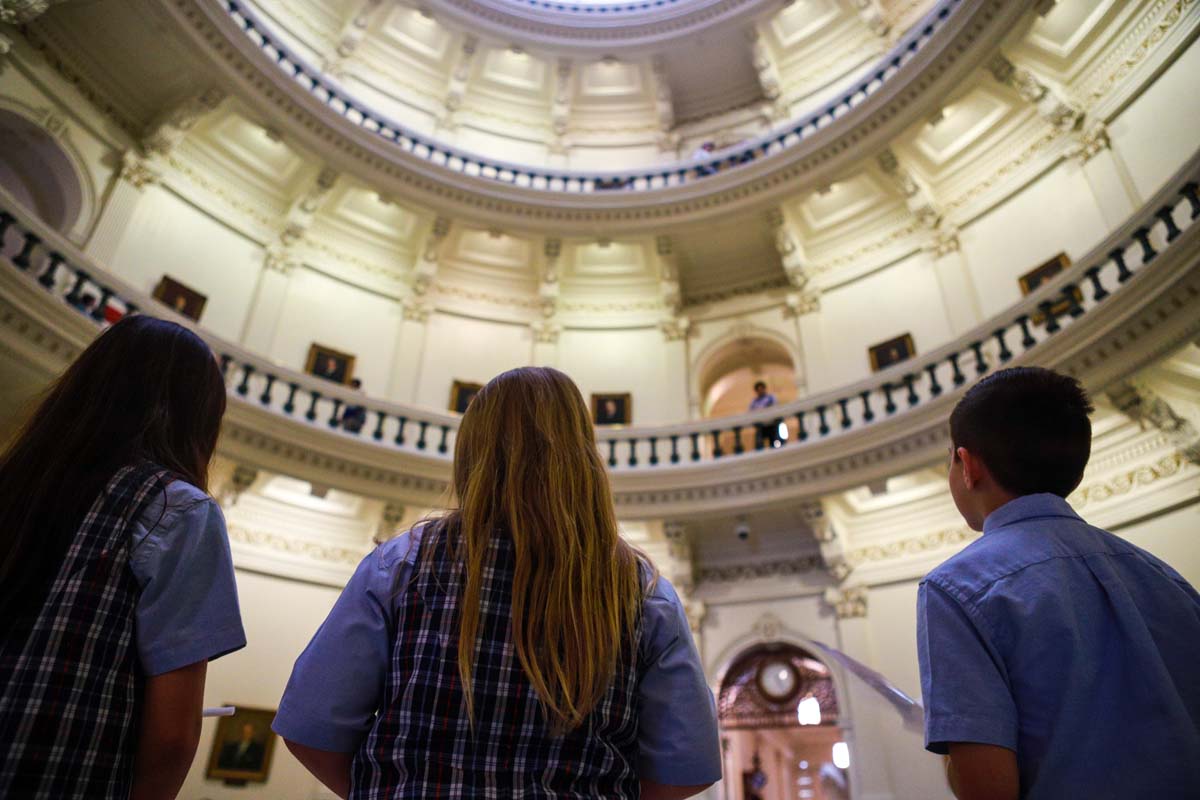 Students of Our Lady Queen of Peace Catholic School in Richwood pray the Rosary with Most Holy Trinity Catholic Church Pastor Father Victor Perez in the Rotunda of the Texas State Capitol in Austin on Texas Catholic Advocacy Day March 26. Photo by James Ramos/Herald.

AUSTIN — Praying the Rosary under the rotunda of the State Capitol and singing “Ave Maria,” faithful from the Archdiocese of Galveston-Houston joined at least 2,000 Catholics in royal blue T-shirts that proclaimed Texas Catholic Advocacy Day on March 26 in Austin.

The crowd from across Texas swarmed the House and Senate on a beautiful spring day to talk with their state legislators about support for a plethora of bills, especially to protect life and improve school education.

Several buses from the Houston area included two buses from Brazoria County, a bus shared between St. Jerome Catholic Church and St. Pius X High School, and another filled with Catholic Charities staff and supporters, to rally in Austin.

State Representative Dennis Bonnen, the new Speaker of the House who is from Angleton and a parishioner at Most Holy Trinity Catholic Church, met with bishops from across the state and also gave a personal tour of his office and home to his constituents.

Father Victor Perez, the pastor of Most Holy Trinity, said, “We are from his hometown and parish, so Dennis was really gracious along with his wife, Kim.”

Father Perez represented the Archdiocese of Galveston-Houston welcoming the crowd at the rally on the steps of the Capitol along with bishops from across the state since Daniel Cardinal DiNardo remained recuperating from a mild stroke and Auxiliary Bishop George A. Sheltz was busy taking care of daily operations at the Archdiocese.

“I’m here on behalf of Cardinal DiNardo. He’s doing great, much better,” Father Perez told the crowd. “Thank you all for your prayers and faith in our Lord Jesus Christ.”

Bishop Patrick J. Zurek of Amarillo, on behalf of the Texas Catholic Conference of Bishops, testified the day before Catholic Advocacy Day on behalf of House Bill 16 for babies to be given medical care if born alive after a “failed” abortion.

“Regardless of the circumstances of his or her birth, any baby merely by virtue of being born is a legally recognized person. Under this bill, he or she must be treated like any other premature infant and given medical care appropriate to his or her age and needs. Actively or passively killing these newborns is infanticide and should be condemned by all people,” Bishop Zurek said.

Julie Fritsch, director of the Archdiocese’s Office of Pro-Life Activities, said she wanted to stay positive despite House Democrats boycotting that committee hearing in an attempt to block debate on HB 16 that could result in fines of doctors who fail to provide medical treatment if a fetus lives through an attempted abortion.

“I definitely want to be positive. People had so much energy and enthusiasm to stand up for what we believe as Christians,” Fritsch said. “We’re so divided as a country and even as Catholics at times, that speaking with one voice and standing together with our bishops can’t help but make an impact on our legislators and we bring that energy back into the parish communities.”

“This was eye-opening for me. We were especially interested in House Bill 344 that would raise the age of children being considered adults in criminal cases from 17 to 18,” Deacon Garcia said.

“This would directly impact the kids we serve. Many of them are first-time offenders at age 17 and are already being considered adults with a record that stays with them for life,” Deacon Garcia said.

Maya said, “We were also supporting education bills to raise the reading levels of students and prevent dropouts to help at-risk youths before they get in trouble with crime.”

Youths were also represented by the student choir from Our Lady Queen of Peace Catholic School in Richwood who sang both on the steps of the Capitol before the rally as well as inside under the dome of the State Capitol. A memorable moment was when House Speaker Bonnen recognized the third through eighth graders on the House floor. After the session, he called them up where they took turns banging his gavel.

“This was a historic event for them,” said Kimberley Dail-Wilson, the school’s director of advancement.

St. Pius X High School students from Houston were also among the groups of high school students participating in mock legislative hearings, educational forums as part of Catholic Advocacy Day. They focused on debating immigration issues. Both groups toured the Capitol to learn more about the Texas Legislative system and Texas State History.

However, such advocacy is not just a one-day duty. Rhonda Sepulveda, Archdiocese of Galveston-Houston Catholic Charities’ Parish Social Ministry coordinator, is among many who have traveled to Austin several times to testify at legislative committee hearings.

One of the bills Sepulveda testified on involved supporting emergency management House Bill 2325. This would provide guidelines to improve communications during disasters in the state, especially with official use of social media to provide pertinent information and dispel rumors, she said.

Catholic Charities is one of the agencies that provides case management and disaster relief after hurricanes and other emergencies.

“Catholic Advocacy Day helps us illustrate our mission, what our work does in caring for our neighbors and who we are as people of faith,” Sepulveda said.

Jennifer Allmon, executive director of the Texas Catholic Conference of Bishops, one of the main organizers, said, “This year’s Advocacy Day was one of our best yet! I’ve heard great feedback from legislators, staff and diocesan participants.”

Before Catholic Advocacy Day, there had not been major movement on some of the pro-life and education bills. But afterward, “We had hearings set for our priority pro-life bills, had our private school student protection bills voted out of committee in the Senate and scheduled for hearing in the House, and got an increase in funding for the Abortion Alternatives program in the floor debate on the budget,” Allmon said.

But she reminded advocates that there are 50-plus days remaining in this session and more work to do.