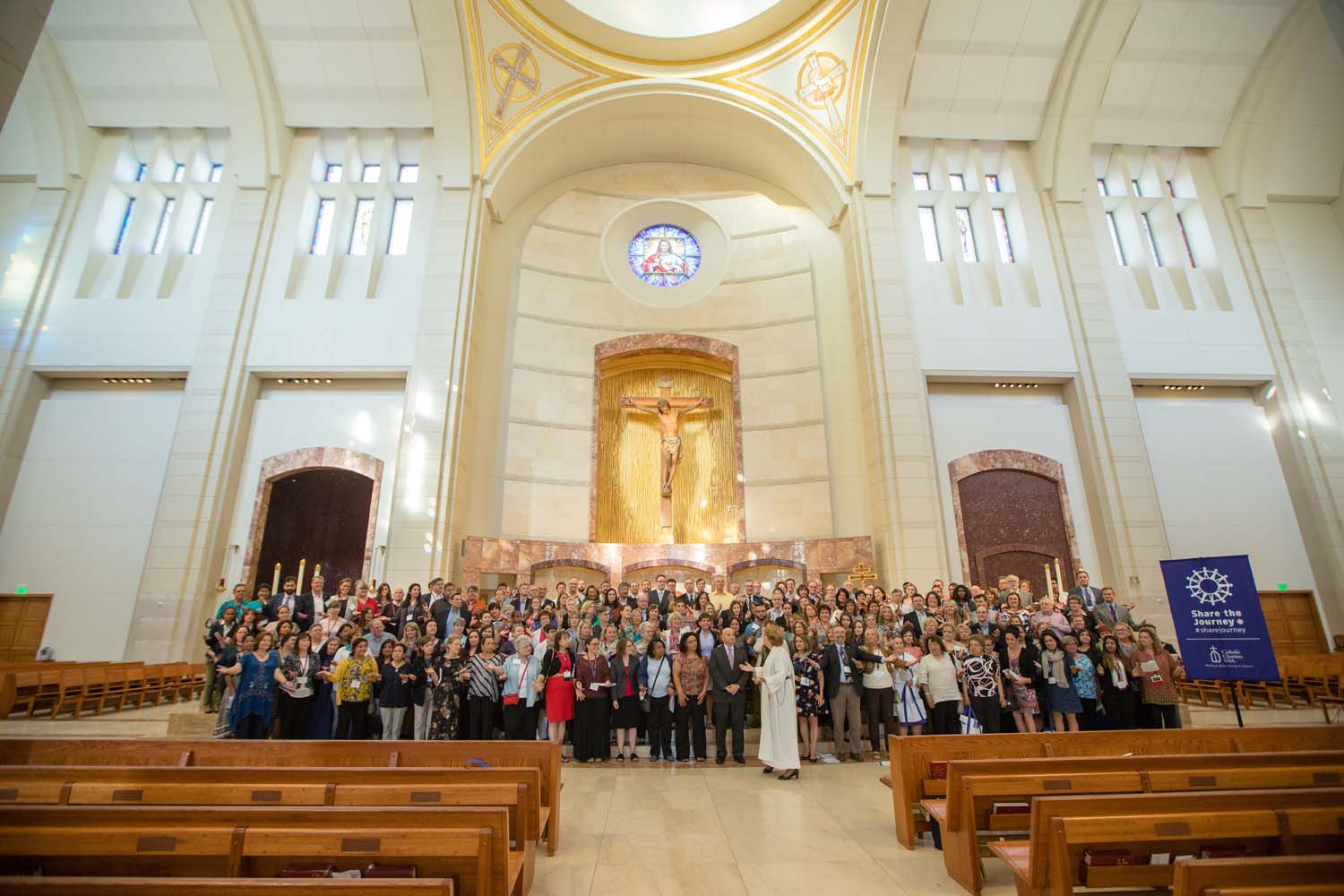 Attendees of the 2017 Catholic Charities USA Annual Gathering extend their arms as a sign of welcome for Pope Francis' "Share the Journey" campaign at the Co-Cathedral of the Sacred Heart in Houston Sept. 29. Photo by James Ramos/Herald.

HOUSTON — When thousands of Catholic Charities and relief agency workers from across the U.S. arrived in Houston one month after Hurricane Harvey ravaged the Texas Gulf Coast, they quickly set out to help the thousands displaced by the storm’s record-setting rainfall.

During their 2017 annual meeting, hundreds trekked to the hardest hit areas in Texas like Beaumont, Port Arthur and Houston to help flood victims with the long-term recovery process.

This effort — to help those in need after Harvey — echoed Pope Francis’ call to “Share the Journey” and accompany migrants and refugees in all walks of life across the world, and in Houston as well, according to Cynthia Colbert, president of Catholic Charities of the Archdiocese of Galveston-Houston.

During the conference, held Sept. 28 to 30, at a hotel across from the downtown convention center which sheltered nearly 10,000 flood evacuees for weeks — many transported by boat, dump truck and high water vehicles — Colbert said the pope’s message to “Share the Journey” is “the essence of who Catholic Charities is... [and] what we strive to do with everyone we serve, to share their journey.”

During Harvey’s aftermath, which saw more than 52 inches of rain across Texas causing catastrophic flooding and more than 70 deaths, the relief agency provided aid at six assistance operations located throughout the Houston area.

“We don’t seek to change people. We seek to journey with them so that they can get to a better place,” she said. “We welcome people from all walks of life and all faith denominations to come to Catholic Charities because they’re having challenges in their life whether it’s lack of housing, a chronic illness, loss of a job, [or] painful relationship.”

Conference attendees canvassed communities, made phone calls to clients and worked the supply warehouse, Colbert said. “I think people are grateful for the touch of the Church.”

As soon as Harvey struck, there was consideration of canceling the conference. But despite worries that the storm would change Houston as a “strong place of faith,” Colbert said “we’re still who we [were] before storm. It’s just a new normal.”

She saw the relief work as a great opportunity to take Pope Francis’ words to heart: to “take the Church out of the church walls and to be with people, right next to them, with them, to journey with them.”

Sister Donna Markham, OP, president and CEO of Catholic Charities USA, found herself alongside others in working the phone bank, checking in on previous clients.

“Share the Journey” calls “attention to the plight of people who are on the move, who’ve been forced to flee their countries for one reason or another,” Sister Markham said.

Despite the overwhelming sense of disaster in 2017, Sister Markham found confidence in the support in the response.

“We’re there for the long-haul,” she said. It’s a wonderful opportunity for “us as a Catholic church to show how we stand together on the side of people who are so very vulnerable right now.”

She said the conference-wide disaster relief efforts were “a deep sign of hope for us at a time in society that’s very difficult and sometimes not real hopeful” and “to have a group like this here, committed to those who are suffering, is extraordinarily inspirational.”

She was also inspired by how people came from all over the country to “stand with us in our work,” she said. “They could have chosen not to [help] come because there are still workshops but it’s a different conference. But they came with the spirit of giving and that’s very inspiring.”

When the rain subsided, at a house on a leafy street in Houston, Louise Zwick also prayed for miracles.

Following Harvey, at Casa Juan Diego, which her and her husband Mark founded in 1980 in the spirit of Dorothy Day’s and Peter Maurin’s Catholic Worker movement, Zwick saw an increase in the number of those seeking aid. Dependent on donations, the house of hospitality serves immigrants and refugees in Houston from Central and Latin America, as well as Africa, some of whom were Deferred Action for Childhood Arrivals (DACA) and Deferred Action for Parents of Americans and Lawful Permanent Residents (DAPA) recipients.

During the height of the Harvey’s rains, rumors of immigration checks at shelters and evacuation sites were rampant, preventing many immigrants from seeking aid for fear of deportation, Zwick said. Government officials publicly assured that no enforcement was happening, but the concern still existed.

Offering housing, financial and food assistance, Casa Juan Diego was stretched to the maximum as the floodwater rose. With the city’s food bank closed for days due to high water, Zwick visited a nearby farmer’s market that was still open to purchase food basics like beans and rice to offer clients who were lining up at the door.

While the flooding didn’t directly affect as many clients’ homes, Zwick said Harvey closed all the businesses, like stores, restaurants and construction sites where they work at, which meant no paychecks.

But still the flood damage was major.

“They kept hoping their houses wouldn’t flood, but many times they did,” she said. “More than anything people come here for help after the flooding.” Much of the damage their clients saw reflected the region: loss of housing, medical supplies, the family car, bedding and other basic needs.

“What we do is provide a few loaves and fishes and hope that the Lord transforms them,” Zwick said. “People really appreciate those loaves and fishes because it gives them a little bit of an impetus to make the next step.”