Pope grieves with shaken communities after spate of shootings 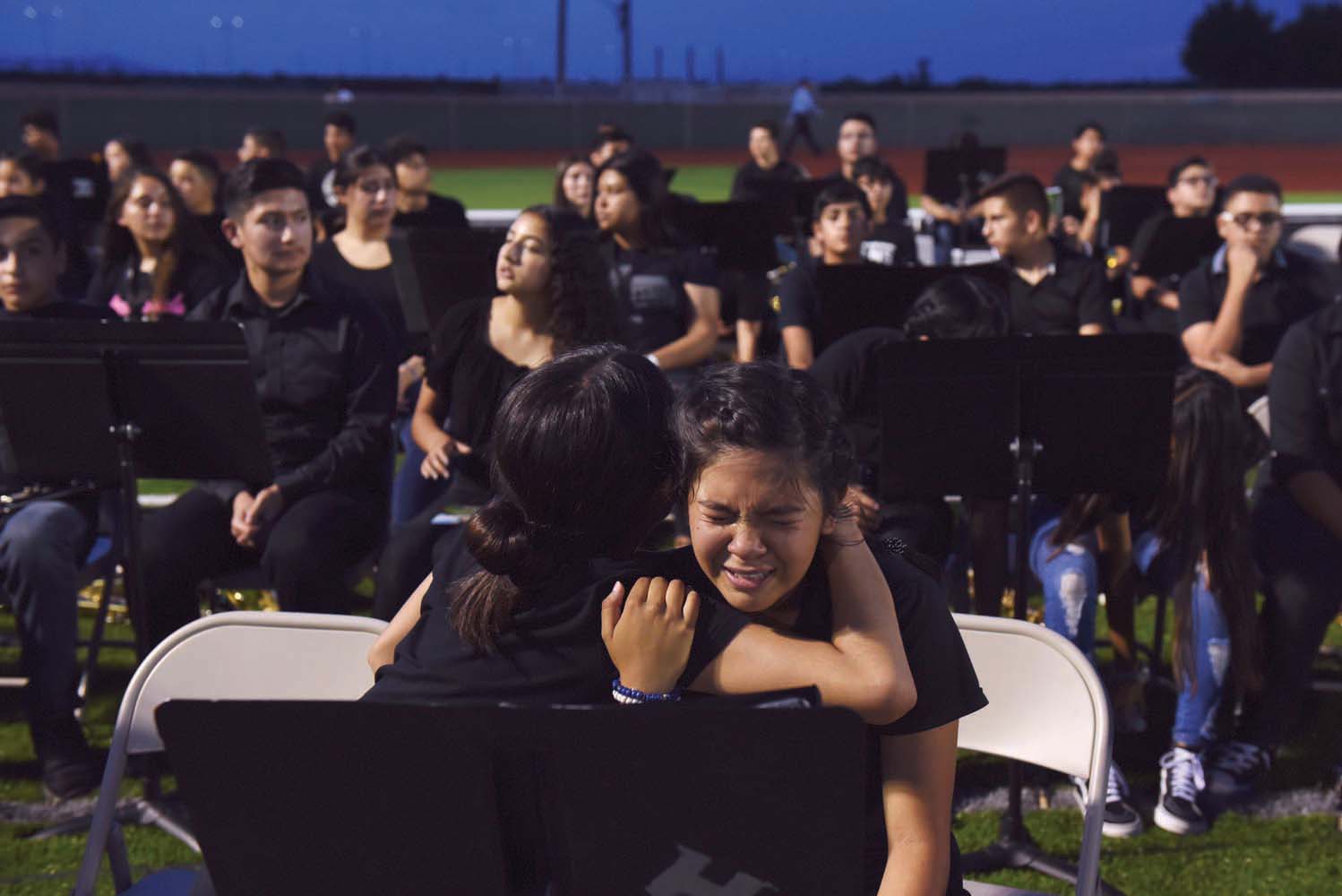 Horizon High School band members embrace after a vigil Aug. 5, 2019, in honor of classmate Javier Rodriguez, who was killed while shopping at a Walmart in El Paso, Texas.  In response to the mass shootings in El Paso and Dayton, Ohio, Aug. 3 and 4, several U.S. bishops expressed their support and prayers for victims while also expressing outrage that these tragedies continue to occur. (CNS photo/Callaghan O'Hare, Reuters)

After the prayer called the Angelus in St Peter’s Square on Aug. 4, the pope said he wanted to convey his spiritual closeness to the victims, the wounded and the families affected by the attacks. He also included those who died a weekend earlier during a shooting at a festival in Gilroy, California.

Days later, the El Paso Diocese released the text of an Aug. 6 personal message from the pope to the people of El Paso. The Pope was “deeply saddened to learn of the tragic shooting” in El Paso. The pontiff assured all those affected by the attack of “his spiritual closeness” and “prays that Almighty God may grant eternal rest to the dead and healing and consolation to the wounded and those who grieve.”

“With the hope that harmony and fraternal solidarity may always prevail over violence, Pope Francis invokes upon all of you the divine blessings of peace and strength,” said Cardinal Pietro Parolin, Vatican secretary of state.

The pope joined bishops in Texas as well as national Catholic organizations and leaders reacting to a bloody first weekend of August, which produced the eighth deadliest gun violence attack in the country after a gunman opened fire in the morning of Aug. 3 at a mall in El Paso, Texas, killing at least 22 and injuring more than a dozen people.

Less than 24 hours after the El Paso shooting, authorities in Dayton, Ohio, reported at least nine dead and more than a dozen injured after a gunman opened fire on a crowd at or near a bar in the early hours of Aug. 4. The suspected gunman was fatally wounded and police later identified him as 24-year-old Connor Betts from Bellbrook, Ohio. His sister died in the shooting.

In the shooting in El Paso, police arrested 21-year-old Patrick Crusius from Allen, Texas. Several news organizations said local and federal authorities are investigating whether the shooting was a possible hate crime since the suspected gunman may be linked to a manifesto that speaks of the “Hispanic invasion” of Texas.

El Paso Bishop Mark J. Seitz participated in an Aug. 4 evening interfaith vigil for the victims with other faith leaders, less than a mile from where the shooting took place, according to the El Paso Times.

Gathered with members of the Jewish community as well as of other faiths, Bishop Seitz and other Catholics from the diocese lit candles and prayed for the victims.

Bishop Seitz also met with the families of those who were killed and wounded. After the meeting he said his heart “was breaking,” after seeing up-close the human aftermath of the crime.

“As a minister I am called to be present to those who suffered this attack and to their families. I need to do so with a sense of composure,” said Bishop Seitz in the statement. “But as I visited with victims and those they love, my heart was breaking within me. Their questions are mine as well. Why the innocent children? Why the mothers with babes in their arms? Why should any human being ever be subjected to such violence?”

In another statement, he said “In the last several months, the borderlands have shown the world that generosity, compassion and human dignity are more powerful than the forces of division.” He called for the world to remember how to be “compassionate, generous and humane.”

WESTPHALIA — In Central Texas, The Church of the Visitation in Westphalia, a nearly 125-year-old wooden church with bell towers on each side, burned to the ground July 29.

The historic church was known for its ornate painted ceilings, statuary and a rare pump organ.

The fire, which began in the morning, is still under investigation. Parishioners ran into the burning church to save what they could, including its tabernacle.

Parishioner Jean McCann could see the smoke from her house and drove over to find the church on fire and other members of the community in a solemn silence watching the flames.

“The flames were just so orange and red. The crackle of the fire was so loud,” parishioner Jean McCann said. McCann and her mother both had their respective weddings in the church.

The church, which is in the Austin Diocese, serves 244 families.