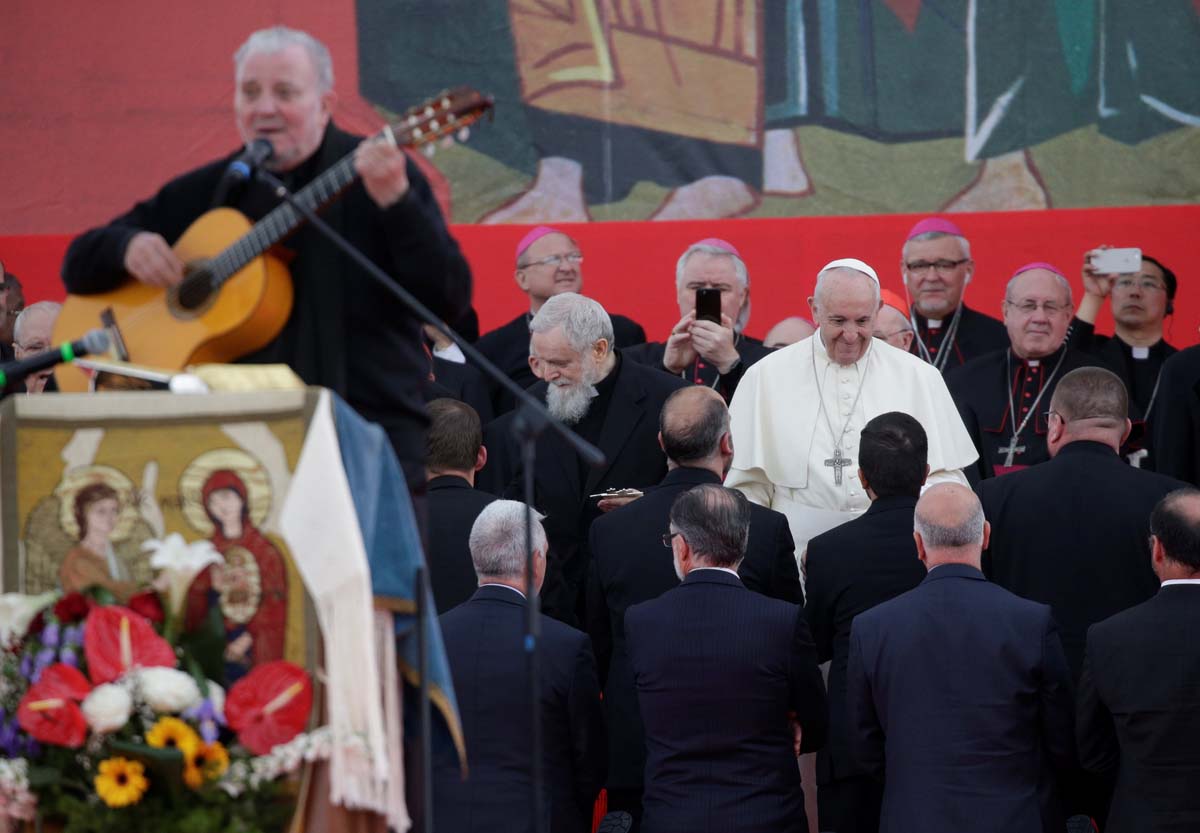 HOUSTON — Pope Francis blessed a May 5 international meeting of the Neocatechumenal Way in Rome, which included 350 pilgrims from Houston, for the movement’s recent worldwide 50th anniversary.

Sharing the Gospel means respectful evangelization, being a witness to love, responding to questions and patiently walking alongside people, not dictating how and when they take the next step, Pope Francis told members of the Neocatechumenal Way.

Some 100,000 members from more than 130 countries, including the United States, gathered to listen to Pope Francis and celebrate the movement, which guides Catholics in exploring the meaning of their Baptism and learning to live according to its promises.

The parishes from Houston that had members traveling to Rome were St. Charles Borromeo, Our Lady of Grace, Notre Dame, St. Raphael, Assumption and Our Lady of Guadalupe Catholic Church on Navigation.

Benjamin Merino of Our Lady of Guadalupe, upon his return to Houston, said, “It was amazing to see people from all over the world singing, dancing and praising God together. Then Pope Francis told us not to be afraid and encouraged us to go out and spread the Gospel.”

Kiko Arguello, an artist and co-founder of the movement that started with the marginalized poor in Spain, introduced members to the Holy Father – calling out the nations represented one by one and introducing the bishops and cardinals who accompanied many of the groups.

Before sending 34 teams of Neocatechumenal Way members off on new evangelizing missions, including to poorer parishes on the “peripheries” of Rome, Pope Francis reminded all the members about the obligation of every Christian to evangelize, and he gave notes on how it should be done.
First, he said, a Christian must never forget that God always loves his children and always keeps his promises.

“Whatever we do, God continues to love us faithfully,” the pope said. “And when the dark clouds of problems seem to gather around you, remember that the faithful love of God shines always like a sun that never sets.”

To evangelize is to share with others that faithful love of God, he said. “It is to proclaim that the Lord loves us and will never tire of me, of you, of us and of our world even if we sometimes tire of it.”

Jesus told His disciples to “go out,” the pope said. “The temptation is strong to stay, to not take risks and to be content with having the situation under control. It’s easier to stay home, surrounded by those who love us, but that is not Jesus’ way.”

The Lord calls Christians to be “pilgrims in the world in search of the brother or sister who still does not know the joy of God’s love,” he said.

The Lord also sent His disciples forth together, the pope noted. “One who is fully missionary does not go alone but goes together.” And, he said, “walking together is an art, which must be learned always. One must be attentive, for example, not to dictate the gait of others. But rather, one must accompany and wait, remembering that the journey of the other is not identical to mine.”

In the Neocatechumenal Way’s outreach to others, the pope said, members must be sensitive to the individual needs of the people they are inviting.

“What counts are not arguments that can convince, but a life that can attract,” Pope Francis told them. It is not “the ability to impose, but the courage to serve.”

Dedicated to pre- and post-baptismal formation of Christians in parish-based groups, followers complete an initial eight-week course of study to deepen their faith. Then they join groups whom they study with, worship together and commit to evangelizing inside and outside the parish.

Today it is estimated that the movement has about 1 million members, in some 40,000 parish-based communities around the world with at least 10,000 communities in Italy. The Vatican, after assuring Liturgy was being followed, approved the group’s statutes in 2008.

Before their trip, Houston parishioners were busy carrying out their Easter Mission. Every Sunday afternoon since Easter Sunday through Ascension of the Lord celebrated May 13, they set up sound systems, an ambo and cross and banner showing a painting of Christ’s face at different parks and plazas across town.

“We are not satisfied watching TV on Sunday afternoon of the Chivas and Tigres (soccer teams) or Rockets and Astros. We want to keep praising God’s name,” Merino said.

Father Timothy Gray, parochial vicar of Our Lady of Guadalupe, also attended and offered a blessing for the pilgrims before their journey.

“They are very devout and this is a trip of a lifetime for them,” Father Gray said of the group.