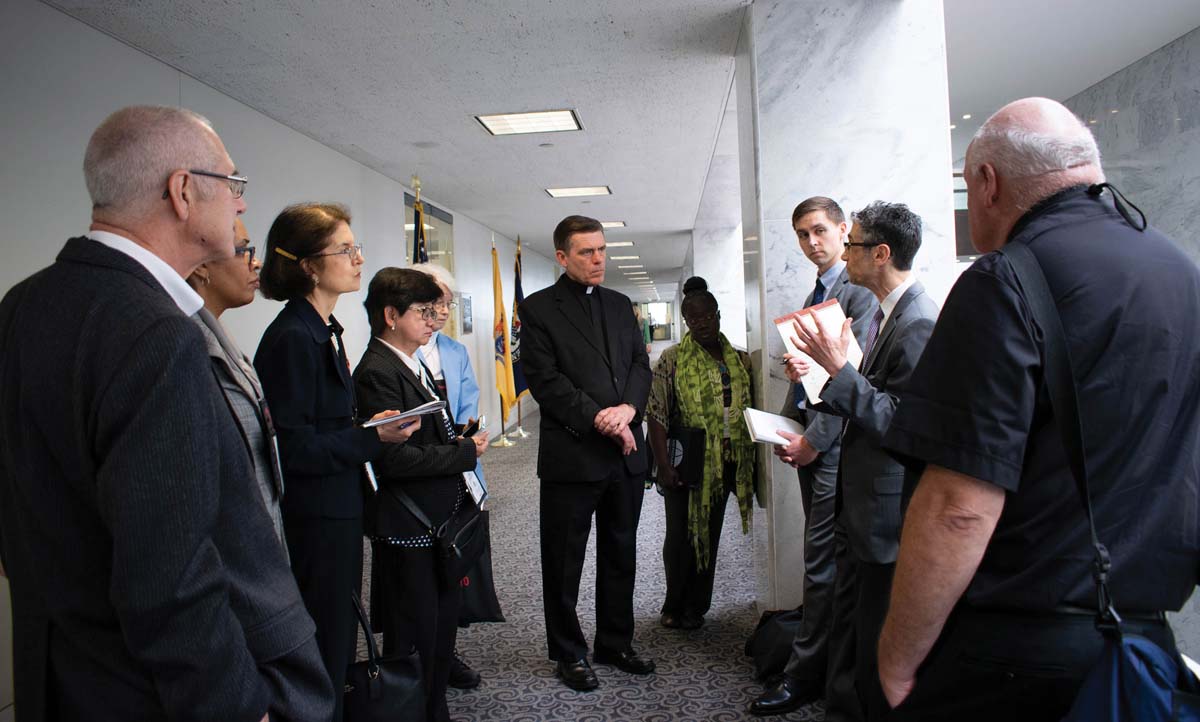 Members of the Pontifical Mission Societies speak with representatives from Sen. Corey Booker's office in the Hart Senate Office Building on Capitol Hill in Washington May 1, 2019. CNS photo.

WASHINGTON (CNS) — Leaders from the Pontifical Mission Societies spent a day of their national meeting bending the ear of members of Congress, urging action on climate change, the protection of immigrants and religious freedom.

Their stops May 1 included the offices of Senator Cory Booker, D-New Jersey, Senator Marco Rubio, R-Florida, and Senator Ted Cruz, R-Texas, among others.

“Because we are so close to the nation’s capital and because we are celebrating this extraordinary mission month (in October declared by Pope Francis), we decided to do something different, which is to turn our missionary experience into advocacy,” said Oblate Father Andrew Small, national director of the Pontifical Mission Societies in the United States.

“We figured out which kind of issues we would raise coming from our experience with missions around the world,” he told the Arlington Catholic Herald, newspaper of the Diocese of Arlington, Virginia.

The work of the Pontifical Mission Societies puts missioners close to the issues for which they advocate.

“We know the people down to the level of the local pastor,” Father Small explained. “We were responsible for helping build some of those churches several years ago in Sri Lanka that were recently attacked.”

The Capitol Hill visits marked the first time that many diocesan directors participated in advocacy.

“The fact that they were willing to meet with us reinforces the idea of representative government and there was a willingness to listen as well as dialogue,” said Deacon Bryan Ott, diocesan mission director for the Diocese of St. Augustine, Florida.

“It has been a good experience to share at the level of faith what the bishops are shepherding us on and sharing that with members of Congress so that change can be made for the good,” added Oblate Father Leo Perez, secretary general of the Pontifical Missionary Union in the United States. “We can be supporting the vulnerable and those (who) are hurting, the immigrants and the earth. Obviously, there are political blocks that (get) in the way of good conversation, but we are trying to get around that and this process of dialogue helps us.”

Before the advocacy portion of the day, Arlington Bishop Michael F. Burbidge celebrated Mass for the more than 60 leaders at the Basilica of St. Mary in nearby Alexandria.

“It is my hope and prayer that you have found many blessings through your common prayer, discussions and in the bond that unites you in your service to the universal church. May you leave these days with renewed vigor, zeal and enthusiasm for the important work and ministry entrusted to you,” Bishop Burbidge said during his homily.

He thanked the group for their “courageous willingness” and said his prayers would go with them for the meetings they were about to have.
In addition to advocacy, leaders from Pontifical Mission Societies had the opportunity to attend learning sessions during the April 30 to May 2 meeting. They heard from Patricia McGuire, president of Trinity Washington University and created an action plan for the Extraordinary Missionary Month in October as designated by Pope Francis.

Father Patrick L. Posey, pastor of St. James Church in Falls Church and diocesan director of the Pontifical Mission Societies, described the meeting as “an opportunity for the diocesan mission leaders to get together to be reenergized.”

“Sometimes,” he said, “we get tired of so many needs coming together and share thoughts on what is working and not working, so we can go back and keep the Spirit alive to spread the Gospel the way the people will receive it.”