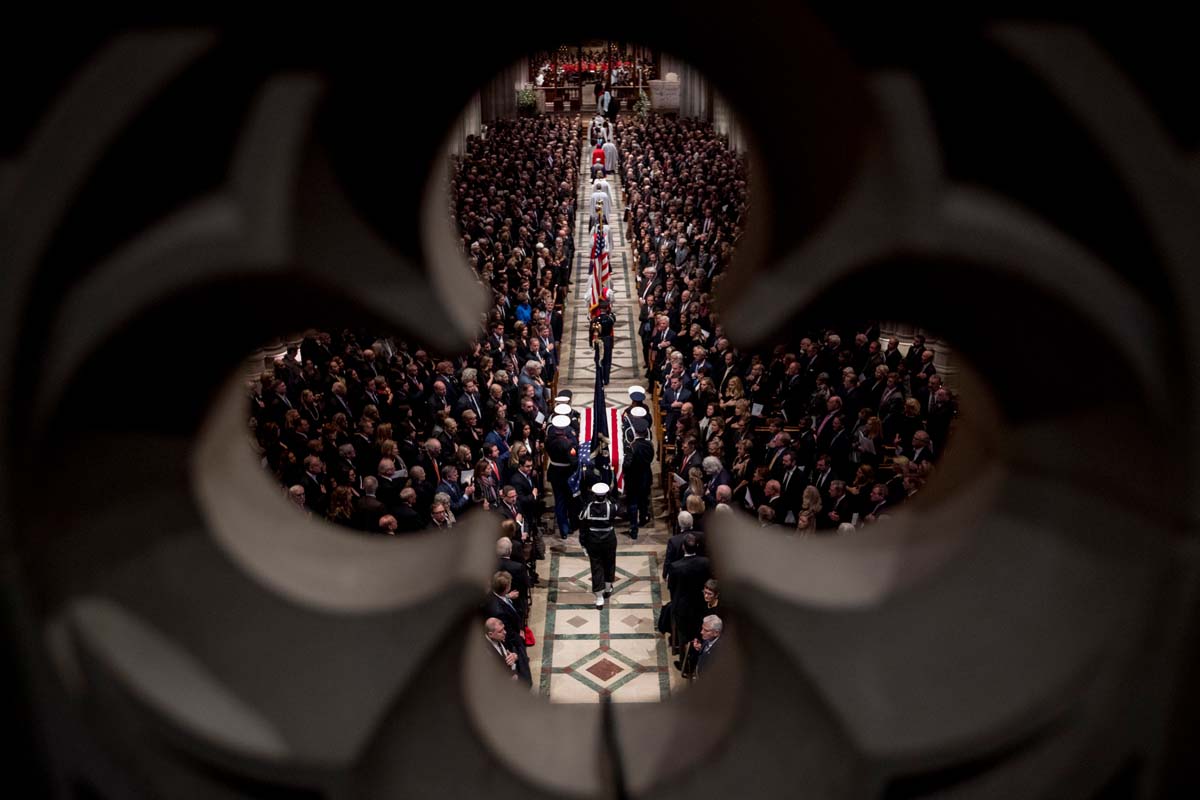 The 41st president of the United States, who made 26 international trips — including two Vatican City visits to St. John Paul II —as the nation’s leader, will travel a bit more through his Houston hometown and the Central Texas countryside before being laid to rest Dec. 6.

Bush’s Monday, Dec. 3 arrival ceremony at the U.S. Capitol in Washington, D.C. featured tributes given by U.S. Vice President Mike Pence, Father Patrick J. Conroy, SJ, Jesuit priest and chaplain for the U.S House of Representatives, as well as other national leaders. In his invocation, Father Conroy commended Bush for his “vocation” of a life dedicated to public service.

Father Conroy noted Bush’s lengthy public service and rise to the presidency. He asked God that Bush’s “example of service to others” inspire both Americans and the world. Father Conroy also thanked God for “inspiring such greatness” in Bush, and encouraged all who attend Bush’s arrangements be their “best selves in service to all” brothers and sisters.

After leaving the National Cathedral, a departure ceremony at Joint Base Andrews in Maryland will offer a final salute. From there, Bush will depart the nation’s capital aboard a plane called “Special Mission 41,” according to officials.

An arrival ceremony at Ellington Field Joint Reserve Base in Houston is set to welcome Bush’s final flight before being transported via motorcade to St. Martin’s Episcopal Church in Houston. At the nation’s largest Episcopal church, with nearly 9,400 members, his body will lie in repose for public viewing overnight. A private funeral should take place Dec. 6 at 10 a.m. Before her death in April, former first lady Barbara prayed with him beneath St. Martin’s vaulted 70-foot arched ceilings as parishioners for more than 50 years.

After the funeral, Bush’s second-to-last motorcade is expected to move to the Union Pacific Auto Facility in Spring, Texas. There, his casket will be placed into a customized rail car of a funeral train that features glass window panes on both sides. This will offer people views of his casket and the chance to recognize the former president as his train travels through several Texas small towns.

The specially designed Union Pacific Locomotive No. 4141 will pull the funeral train to College Station. The engine bears Bush’s Air Force One plane’s bright blue hues and sweeping lines of “forward motion representing progress,” according to Union Pacific. The ‘4141’ designation honors Bush as the 41st U.S. president. The trip is 70 miles and should last about 2.5 hours.

While many past presidential candidates have used a presidential campaign train like Bush on whistle stop tours, he will be only the eighth have used a train as part of their funeral arrangements. Former U.S. president Dwight Eisenhower was the last president to use a funeral train in 1969, when he was transported from the nation’s capital to Kansas.

In College Station, the funeral train will be greeted by Texas A&M University’s Singing Cadets and Fighting Texas Aggie Band in an arrival ceremony near the school’s football field. Bush will then be transferred to a final motorcade bound for the George H.W. Bush Presidential Library and Museum.

Finally, after a state military funeral with full honors, he will make his last journey to be reunited with and privately buried alongside wife Barbara, who died in April, and daughter Robin, who died in 1953 at the age of three, in a family plot behind his library.