Pastoral letter on racism a teaching moment for leaders 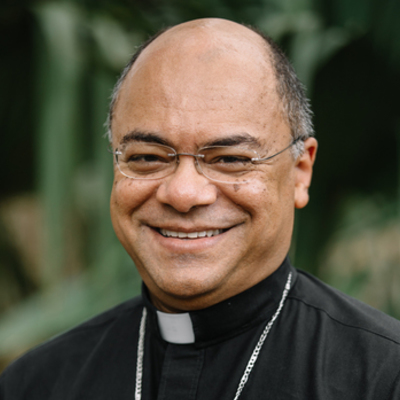 At right, Bishop Shelton Fabre, bishop of the Diocese of Houma-Thibodaux and chair of the USCCB committee against racism, will speak at the Sept. 21 Archbishop Fiorenza Symposium “Open Wide Our Hearts: An Encounter of Grace and Race.”

HOUSTON — Instead of allowing fear and anger to win in the latest spate of mass shootings, local leaders are turning to open dialogue and positive action to battle racism or whatever incites people to dehumanize others.

The Archdiocese is training ministry leaders based on the U.S. Conference of Catholic Bishops’ (USCCB) 2018 pastoral letter against racism, “Open Wide Our Hearts: The Enduring Call to Love.” (View the letter here at http://www.usccb.org/racism).

Jim Barrette, secretariat director of pastoral and education ministries, decided to have workshops for his department heads about diversity and inclusion.

“We wanted to see how we as the Archdiocese reflect the community,” Barrette said. “I am reminded by the news of the day of the critical importance to train leaders to become aware of their own biases and work to align themselves with the virtues we espouse as Catholics.”

Barrette added, “We all struggle to live the Gospel values we hear about each week in the Scriptures and in homilies.

That struggle begins inside each of us as we make that measure match our attitudes, words and actions every day in relation to those we meet as well as those who are not near to us but for whom we are still called to respect in our hearts.”

Barrette brought in the office directors of Pro-Life Activities, Hispanic Ministry, Special Youth Services (which ministers to youth being detained by the county), college campus ministers and others for training with Sonya Ware of Blue Beagle Consulting.

Growing up in Houston’s Sunnyside, a predominantly African-American community, Ware recalls as a child being in the car with her father driving when a police car passed by.

“My father kept saying, ‘Look straight ahead. Don’t look at the police officer,’” she said.

Ware said children of color usually feel that they are different or don’t belong when they are younger, around six or seven years old. Some whites may also encounter those feelings around that age, but many may not be exposed to diversity until they enter college.

Ware said of unconscious bias, “We see the world through our own experiences.”

Father Cook said, “We want campus ministers to be aware of any biases. Our mission is to help and support young adults to continue to grow in their faith.”

A white male, he recalled first tasting prejudice at 19 years old when he was dating a young African-American woman in New Haven, Connecticut. As they were walking together, they stopped to wait for a light at the crosswalk. A car pulled up, and someone inside it flicked a cigarette at her and said the “n” word. Then they drove off.

“I was shocked and angry. She was angry, but not surprised,” Father Cook said.

The public is invited to a similar day-long teaching event at the University of St. Thomas (UST), which is hosting a September 21 Archbishop Fiorenza Symposium “Open Wide Our Hearts: An Encounter of Grace and Race.”

Keynote speakers will be Bishop Shelton J. Fabre, chair of the USCCB committee against racism, and Danielle Brown, the committee’s associate director. In the pastoral letter, the bishops were forthright in recalling the sins of racism within the Catholic Church against Native Americans, Hispanics, African Americans and other ethnicities.

It specified turning a blind eye as much of the country did to the more than 4,000 black men, women and children lynched between 1877 and 1950 as well as up to 1,000-plus Hispanics lynched, mostly to have their ranches stolen from them.

“We, the Catholic bishops in the United States, acknowledge the many times when the Church has failed to live as Christ taught — to love our brothers and sisters… We ask for forgiveness from all who have been harmed by these sins,” the letter states.

“Racism is a moral problem that requires a moral remedy — a transformation of the human heart — that impels us to act,” it concludes.

Carlo Romero, UST associate director of pastoral and ecumenical initiatives of the Donald S. Nesti, CSSp, Center for Faith & Culture, is helping to organize the symposium.

“We were touched by the letter written by the bishops. Part of our mission at the center is to engage civic society and the greater community, not only on our college campus,” Romero said.

“We need to equip people better to respond within their own sphere of influence,” he said.

“Through the use of educational tools, self-examination and facilitated dialogue, we hope participants will be protagonists for the transformation of minds and hearts in our communities,” Romero said.

Other speakers include Gail Glasser of the Anti-Defamation League, Laurence Payne of Dialogue Houston on HCC-TV and Gabriela Karaszewski, director of Young Adult and Campus Ministry for the Archdiocese.