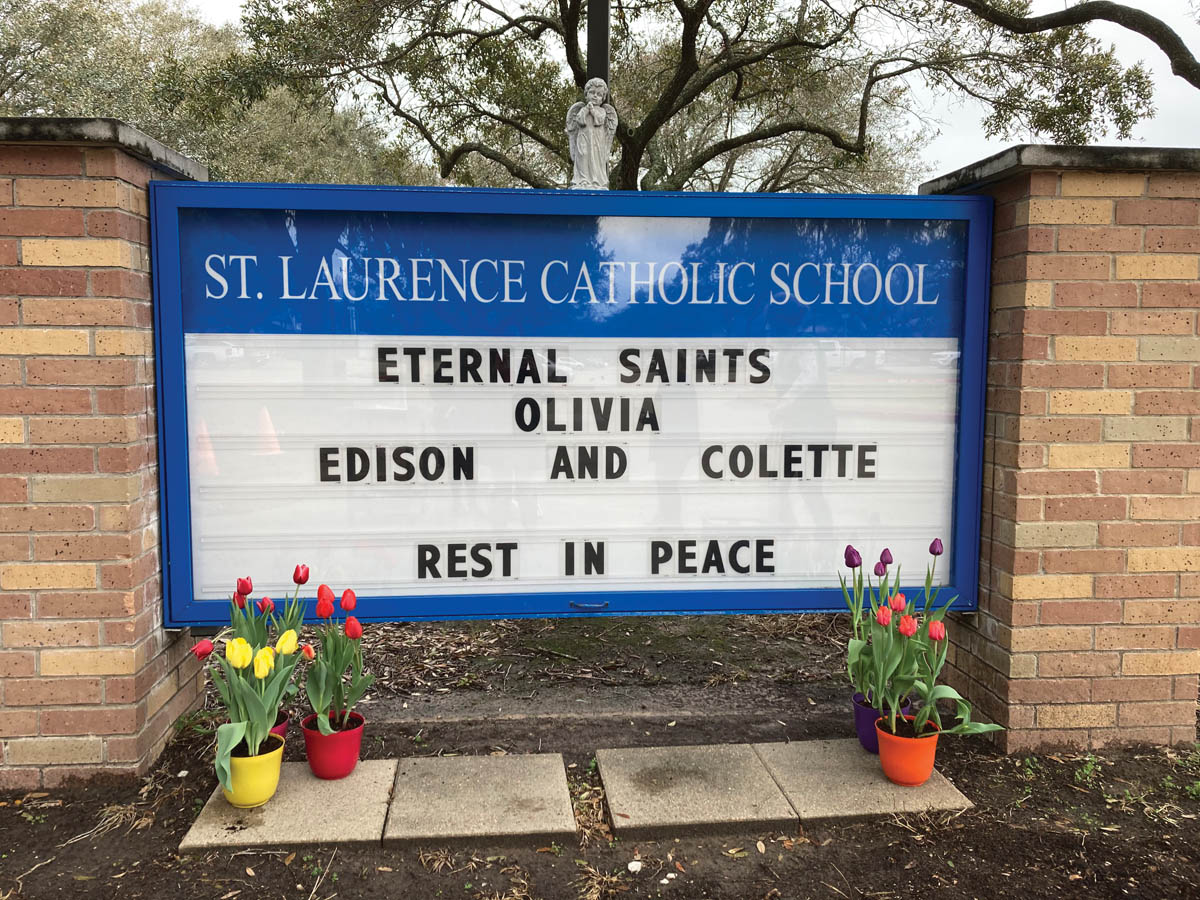 HOUSTON — In the days after another historic weather storm pushed into Texas – this time with frigid temperatures – on Valentine’s Day, the snow that once surrounded St. Laurence Catholic School’s sign was replaced by bright red, purple and yellow tulips to honor the lives of three of their own students.

The Sugar Land parochial and school community in Sugar Land mourned a tragic loss, as three of their students — Nguyen siblings sixth-grader Olivia, second-grader Edison and kindergartener Colette, died in a devastating house fire along with their grandmother, Loan Le.

Suzanne Barto, school principal, said the school was concerned about canceling classes and dealing with the aftermath of the ice storms when they learned Feb. 17 that one of their families had lost “three precious children” and their grandmother.

“Immediately, all our thoughts were for the mother,” father and family, she said. “Families and staff were devastated, and all were reaching out to help.”

Barto said the Catholic school planned around the students’ usual routines, starting the day with prayer and intentions. Students and staff, who were also dealing with their own damaged homes and lack of water or power, grieved together.

At school the next Monday, there was much to pray for. 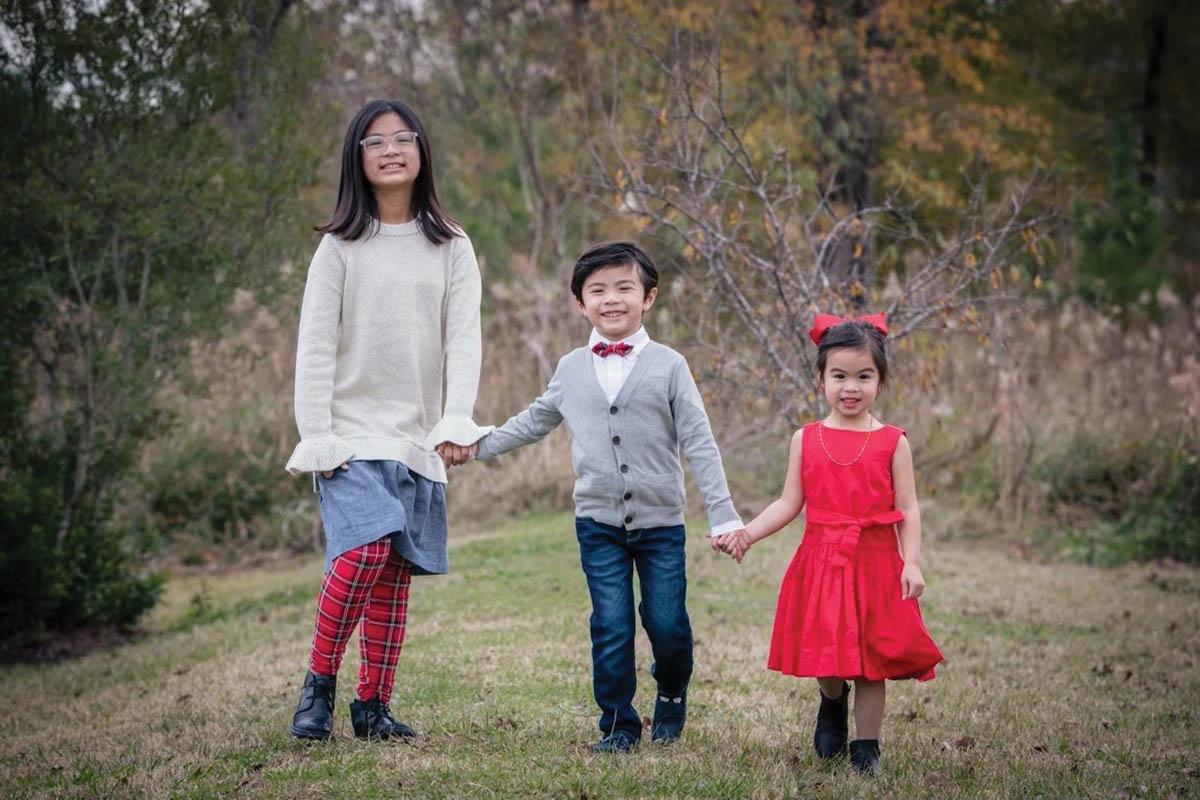 Tragedy is not the end

Barto said the students started the healing process with activities to honor their classmates. These included decorating boxes for prayer notes, virtual bulletin boards and origami creations. The Japanese paper folding art was a favorite pastime of Olivia’s, Barto said.

The parish hosted the funeral services, including a March 2 vigil service and a March 3 funeral Mass.

“You share that work of life with God: only through you, God was able to bring the miracle of your children,” he said in his homily. Father Nguyen said that the children still need their prayers, and remain with the mourning communities in prayer.

“Don’t stop going to God,” he said. “Tragedy does not have to be the end.”

In prayer and strength

“Counselors and teachers followed the lead of the students, and a ‘safe space’ room was created if anyone needed to step out of the classroom,” Barto said. “Students were allowed to bring stuffed animals to hug since we are still having to socially distance, and a Rosary for the school and family was led by our priests that evening in the church.”
Barto said they are doing their best as a community to surround this family with love and support while keeping watch over their staff and students during this very difficult time.

The school was working on a prayer calendar for families to choose a day to pray a Rosary for the Nguyen family throughout the year, and plans will be discussed with the family for a memorial to their new little saints.

“St. Laurence has always been strong, and whenever there has been a need in our community, our school family shines,” she said. “I am amazed at the resiliency and depth of caring that continues to be exhibited by everyone involved. We will walk this healing journey alongside these grieving parents and continue to call upon our faith to lead us through.”

The Catholic Schools Office provided information for families to talk to their children at home and arranged for extra counselors to be on hand from the Catholic high schools.
“My heart goes out to the entire St. Laurence community and to the Nguyen family,” said Debra Haney, superintendent of Catholic Schools. “I knew the family when I was principal at the school, and I am deeply saddened by this tragic loss.”

Haney said that as a mother who was still grieving the loss of her own mother a few months ago, she “cannot fathom the intense sorrow that the family must be experiencing.”
“My prayer is that they will be comforted by the outreach of the school families and that they will experience peace of mind and heart by the loving care shared with them by others representing Christ to them,” she said. “My thoughts and prayers remain with them.”

Haney said the Archdiocese had about 25 schools adversely impacted by the storm, “some with minor damage and relatively simple repairs to a few with extensive damage that is taking some time to deal with on the campuses.” 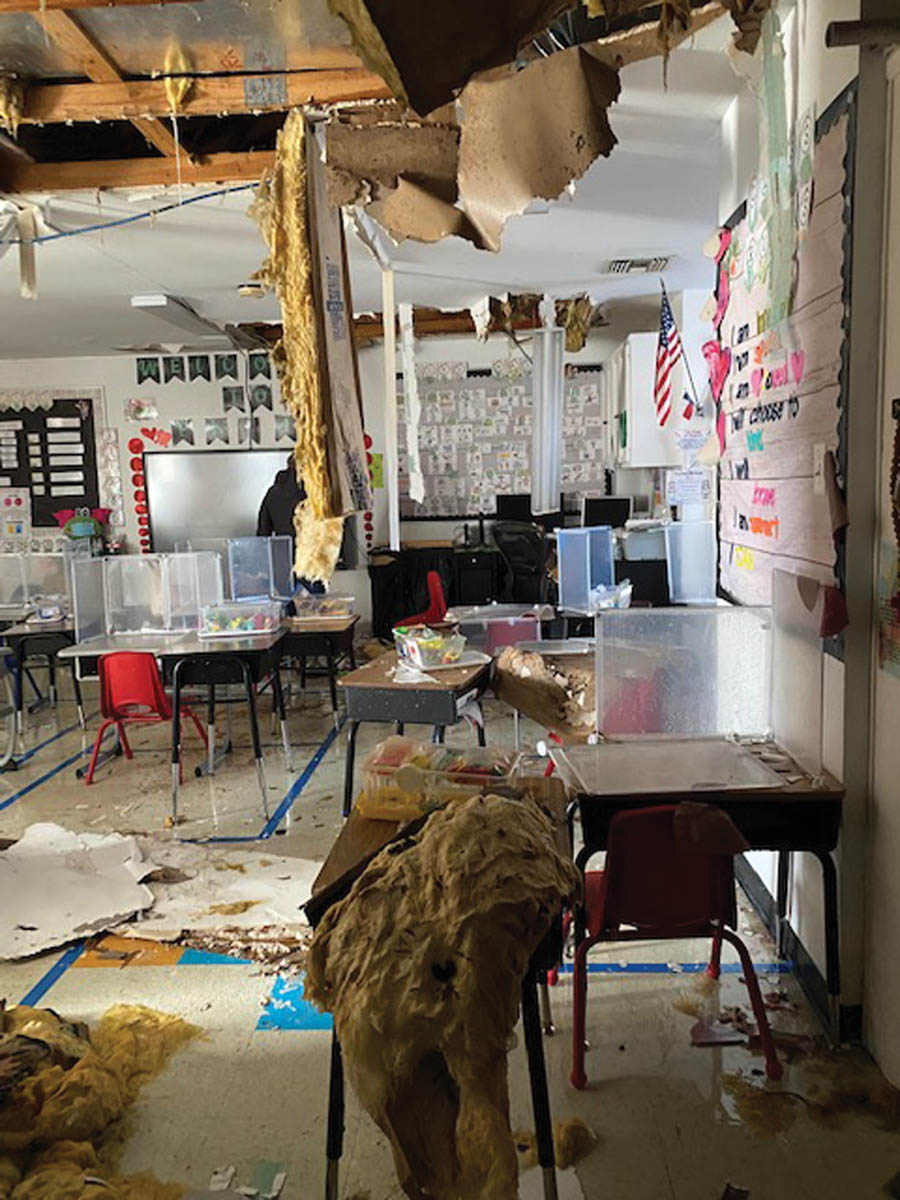 ‘I have never felt so devastated’

Our Lady of Guadalupe Catholic School in Houston’s East End sustained extensive damage from the storm.

“I have never felt so devastated in my career as a principal. Our Lady of Guadalupe Catholic School is my home. It was heartbreaking to witness the damage,” said school Principal Irazema Ortiz. Water from burst pipes crashed through ceilings.

Staff and faculty found the school damaged on Feb. 19, and with the help of parent volunteers and faculty, the school came together and helped move furniture and remove items that were damaged.

The school moved the 3- and 4-year-old students into the main school building. The only spare classroom for the students was in a Spanish classroom, which is now the preschool classroom. The classes were combined, with both teachers co-teaching.

Ortiz said that by Feb. 24, the preschool students were settled into their new preschool classroom in the main school building and started their first day back to school after the winter freeze.

“I am truly grateful and blessed to be part of such an amazing community, always willing to help and lend a hand when needed. It’s so rewarding to have such a supportive pastor in Father Wojciech Adamczyk, SJC, and to be part of this parish and school community.”

Just a few hours after the devastating fire in Sugar Land, Father Anil Thomas, S.V.D., lost his car and all his belongings after his rectory at Holy Name Catholic Church went up in flames.

He still celebrated Ash Wednesday Mass the next day in a frigid cafeteria.

Father Thomas, who is pastor of the church, told the Houston Chronicle: “Today is Ash Wednesday, and we are in ashes.”

The historic winter storms in February shattered electric plants across Texas, prompting energy providers to force blackouts across the state to preserve what fragile electricity had.

At least 75 deaths have been linked to the storms and subsequent power outages due to hypothermia, carbon monoxide poisoning, home fires or cars crashing on icy roads. There were reportedly 50 in the Houston-area alone.

Christ the Redeemer Catholic Church experienced extensive damage after a fire sprinkler drain valve broke and sent water over the first floor of the parish’s activity center.
“Water found its way through the gym, hallways, classrooms and into the auditorium,” Father Sean Horrigan, the church’s pastor, said. “It wasn’t deep, but it was wide.”

Activities were displaced from the building for just a week, with crews soon arriving on site to begin the repair process. The school and youth ministry resumed use on March 3.
Father Horrigan said most repairs were cosmetic and that the building had been certified for use again.