‘Parish of praise’ marks 70 years of blessings in Kashmere Gardens 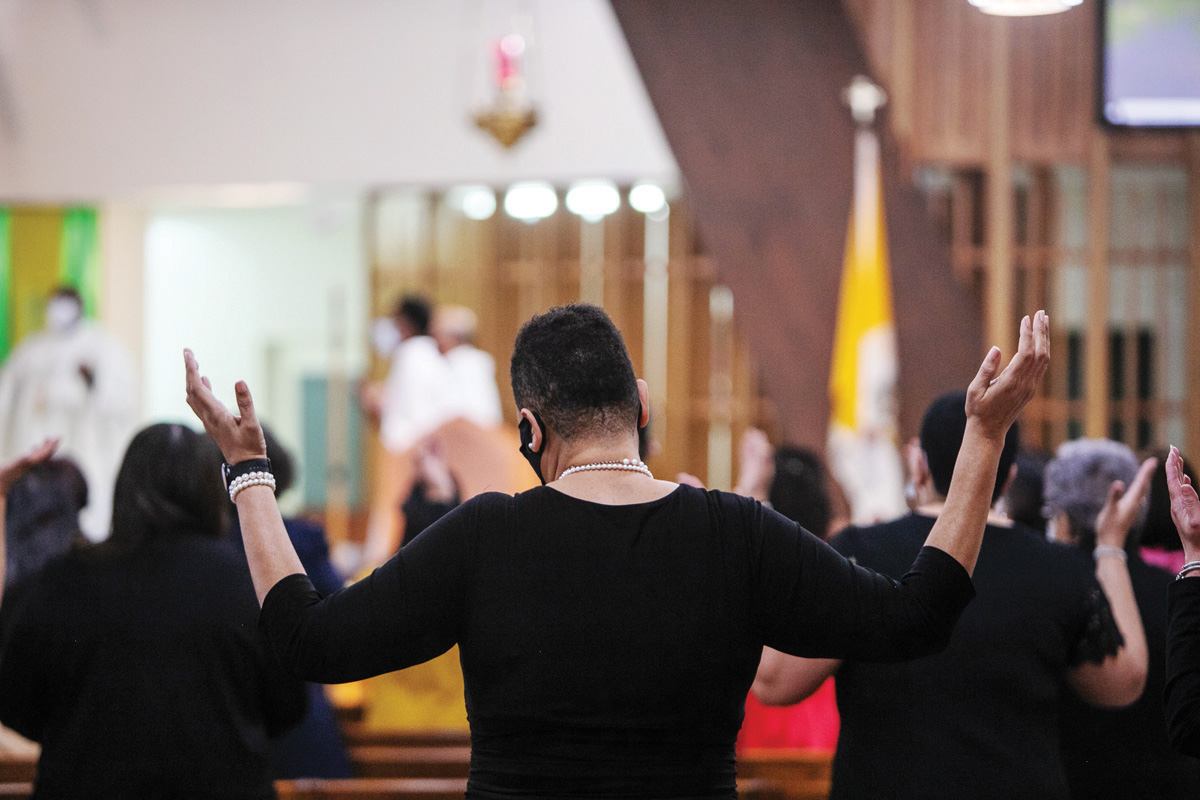 HOUSTON — Under the watchful gaze of a statue of St. Francis of Assisi, his iconic stigmatic hands outstretched before him, Daniel Cardinal DiNardo celebrated with joy the 70th anniversary of the founding of St. Francis of Assisi Catholic Church on Oct. 30. Just a day shy of the start of November, Black Catholic History Month, the special Mass marked the end of a year-long series of events to honor the Kashmere Gardens parish community’s founding by Father John Cummings in 1950.

“God has blessed this parish,” Cardinal DiNardo said in his homily. The parish has experienced a myriad of life: “poverty and riches, floods and hurricanes and rebuilding, suffering and sadness, but much joy and celebration.”

To the parish’s predominantly African-American congregation, Cardinal DiNardo recognized the nation and local struggle with racism, noting the “confrontation constantly in this city, and even in the Church, with racism.”

And yet “beautiful” effects of light “have penetrated that darkness,” Cardinal DiNardo said. Like St. Francis, who is known for his love of creation — loving Sister Moon, Brother Sun — “this parish is the parish of praise.”

“Most of your praise is for people: the children, youth, young adults and adults, the middle-aged and elderly, families, religious men and women, priests and deacons — your parish has always excelled with having a wonderful variety of God’s people,” he said.

According to parish officials, the parish’s original congregation was comprised of 700 families, 60% of Czech descent and 40% of other Anglos. Today, as the demographics in the community slowly changed, Asians and Hispanics join the now predominantly African-American congregation. When the parish celebrated the dedication of its church building in 1965, a widely diverse congregation filled the pews, reflecting Houston’s already growing diversity.

Cardinal DiNardo also recognized the wide variety of vocations at the parish, from the Sisters of Charity of the Incarnate Word who founded the neighboring St. Francis of Assisi School, which had marked its 50th anniversary in 2020, to the Daughters of Divine Love and the Missionary Society of St. Paul who help run the parish and its ministries today. 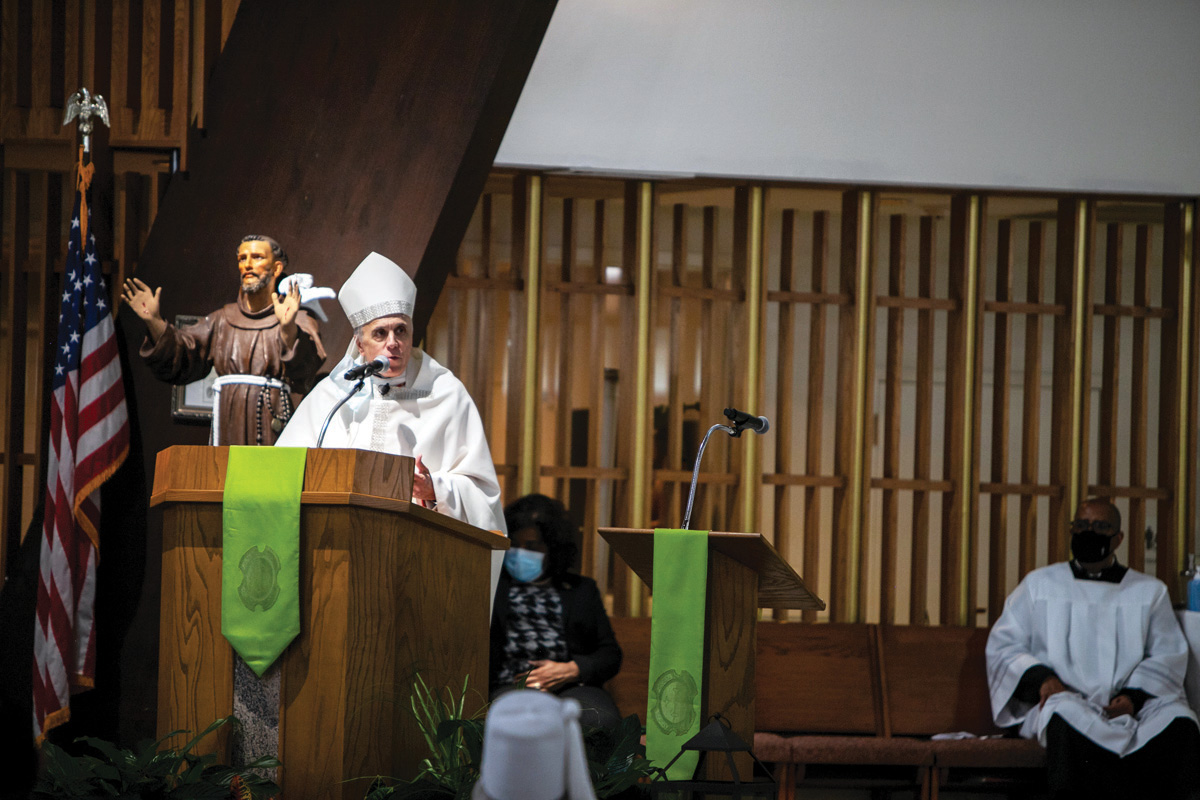 “It’s important that we see the beautiful results in God’s Church,” he said.

Cardinal DiNardo also encouraged the parishioners to keep their young people in the faith.

“We need them to continue the wonderful works of St. Francis of Assisi parish,” he said.

Pandemic guidelines were in effect, with a limited capacity and distancing. Still, Cardinal DiNardo recognized the gift of the celebration.

“Our 70th anniversary can only really be an anniversary if we celebrate the Gospel feast that Jesus gives us tonight: the gift of His Body and Blood,” he said. “It’s such a beautiful, beautiful reality we live, that we can always be gathered by the Eucharist and we become partakers of His Body and Blood. We’ll do that tonight at His Gospel feast of the Kingdom, and we’ll be delighted and glad just as the Philippian community was almost 2,000 years ago when they celebrated the Eucharist.”

St. Francis of Assisi was also designated a “Holy Door of Mercy” parish, one of eight in the Archdiocese during the Year of Mercy in 2016. That same year, Father Martin Eke, MSP, was assigned as pastor and administrator of the parish. One year later, Hurricane Harvey flooded the parish and the region with its record-breaking rainfall. When the water receded the weekend after the storm, parishioners gathered in the shade of a large tree on the parish grounds for Mass.

The parish and school were displaced for 19 months while renovations and restorations took place. The parish had also previously flooded during Tropical Storm Allison in 2001. 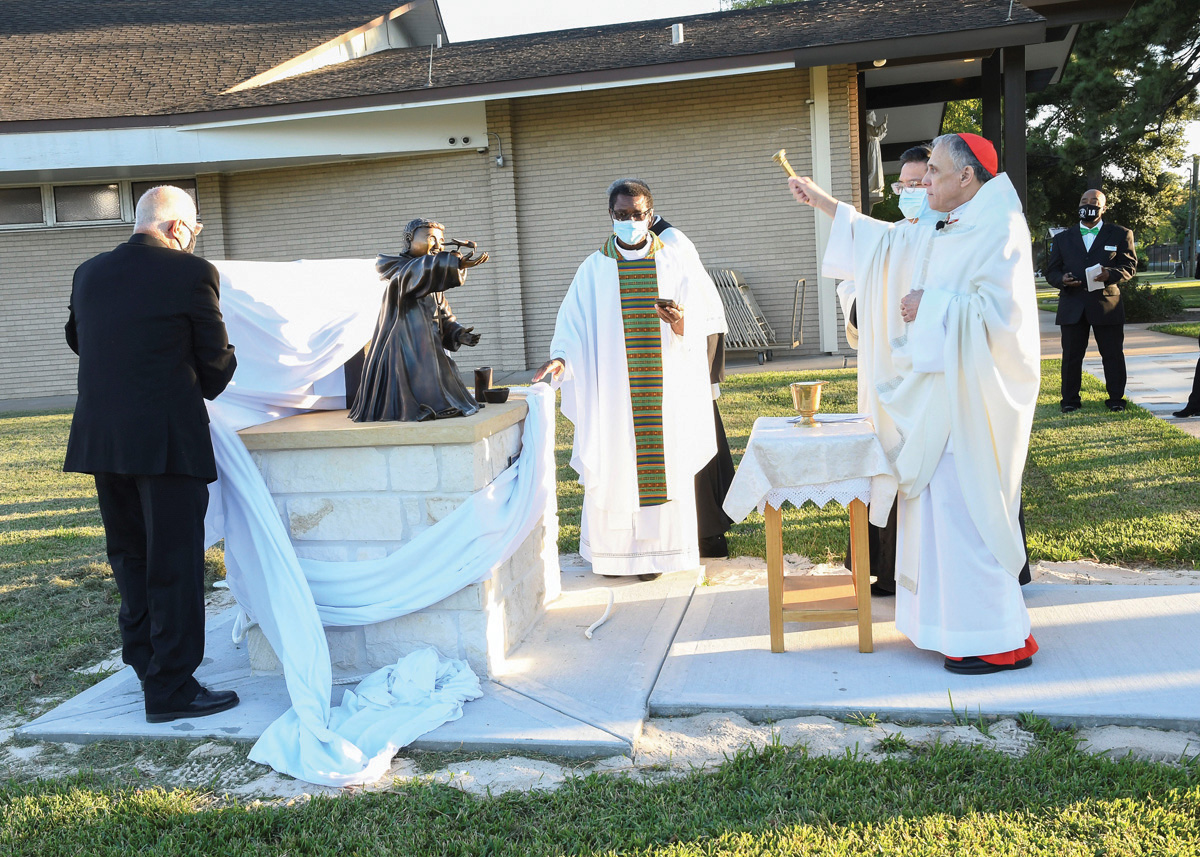 Cardinal DiNardo also embraced the history of the parish, including those who had gone before to the Lord.

He asked the parishioners who they remembered: the catechists, the teachers, the friends and family in the parish, the ministries and organizations.

“They brought all kinds of good to this parish,” he said. “We remember ... all those who had good works that they did with the church. To help the kingdom reach its merciful zenith point. They may have done this in times or days that were really tough. Are they with us tonight? I do believe they are. We’re going to pray with them as we pray for them tonight.”

Cardinal DiNardo reminded the congregation of the eternal sense of the Mass.

“That’s the great thing about gathering at Mass,” he said. “The living and the dead and the saints, everyone’s involved. Everyone’s involved in the celebration, which is why we consider it so holy because it’s more than us. Imagine all of the 70 years of St. Francis is here tonight.”

Before celebrating Mass, Cardinal DiNardo blessed a new bronze sculpture of St. Francis of Assisi outside the church building. The sculpture, which weighs more than 300 pounds, was donated to the Kashmere Gardens parish by Dr. Terry Rustin of Houston.

With the onset of the pandemic, the parish, like so many others, transitioned their ministries and expanded in ways never before seen.