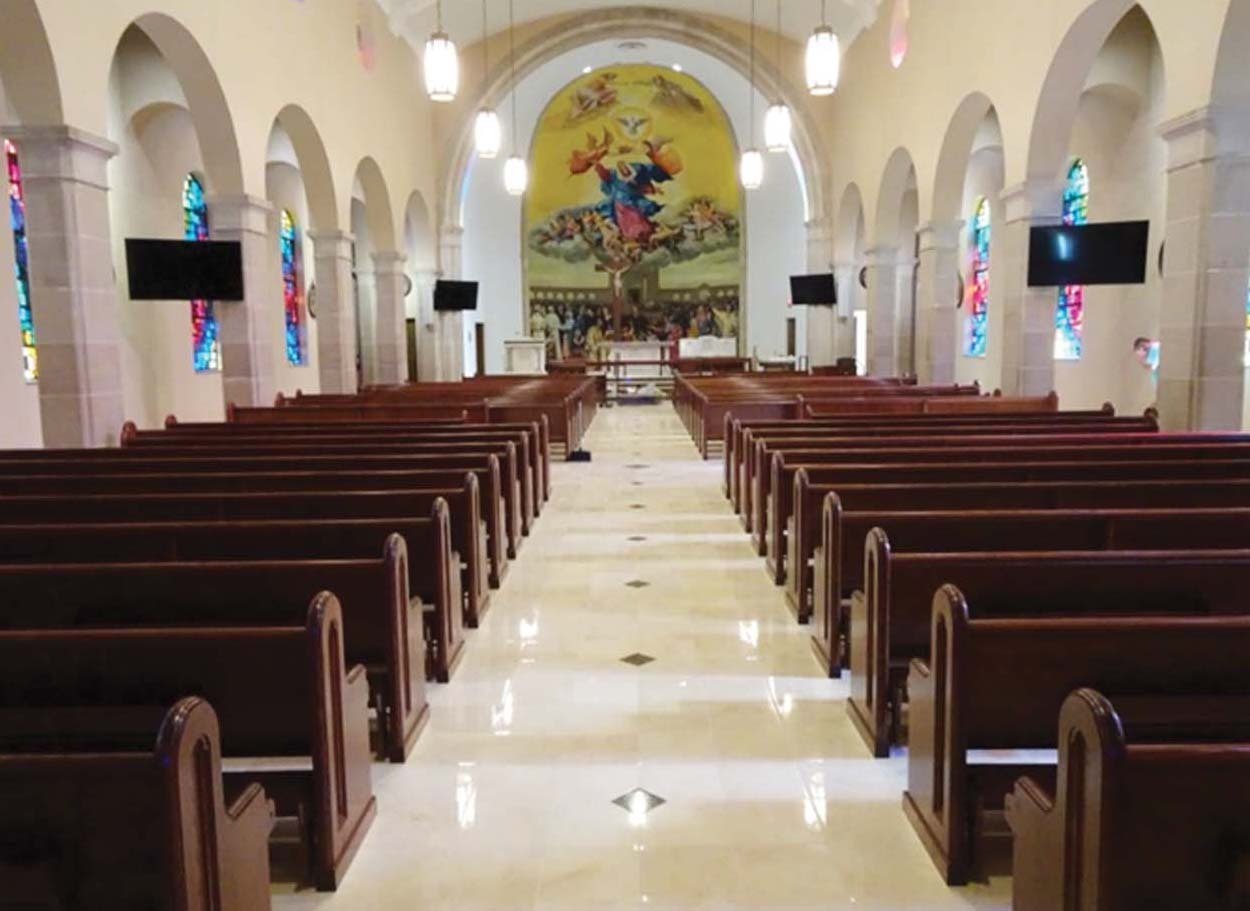 Assumption Catholic Church returned to a newly renovated church after spending all summer celebrating Masses, confessions, and other liturgical celebrations in their gym. The church replaced all the pews with comfortable and low maintenance kneelers, have a new sacristy ceiling, a new safety guard on their second-floor space, new and wider stairs to the overflow room, new doors to their inside rooms, new confessionaries, new sound system, four TV monitors, LED lights across the church and a new fresh coat of paint. (Photos courtesy of Assumption Catholic Church and by James Ramos/Herald)

At Assumption, a floor-to-ceiling painting of the Assumption of the Blessed Virgin Mary now glows brighter among the church’s many renovations.

The Houston community of more than 4,150 families had moved into the parish gym during the renovation process. There all the parish Masses, confessions and other liturgical celebrations were held.

After the summer renovation, the parish returned to their newly renovated church on Aug. 17 when Archbishop Emeritus Joseph A. Fiorenza celebrated a Mass of Blessing of the Re-Inauguration of the Church, which was the first Mass in the new space, with pastor Father Albert Zanatta concelebrating.

The new renovations offer the parish improved space in which to worship and pray. The entire church received a fresh coat of paint, as well as many new furnishings, like new tile flooring, pews, kneelers.

New confessionals were installed in the church, along with four new television monitors and a new sound system that will assist with worship.

The sacristy also received a new ceiling, while a new rail safety guard was installed in the church’s second-story space. The stairs that lead to an overflow room were replaced and widened, and new doors were installed that lead to interior rooms. Energy efficient LED lighting brightens the church, which reflecting off the church’s colorful stained glass windows.

Led by the Somascan Fathers, Assumption Catholic Church was founded in 1948.

Located off Airline Drive and E. Little York Road near I-45 North, the parish is known for its large living Stations of the Cross held Good Friday every year, among other parish events. For Mass times and more information, visit assumptionhouston.org. 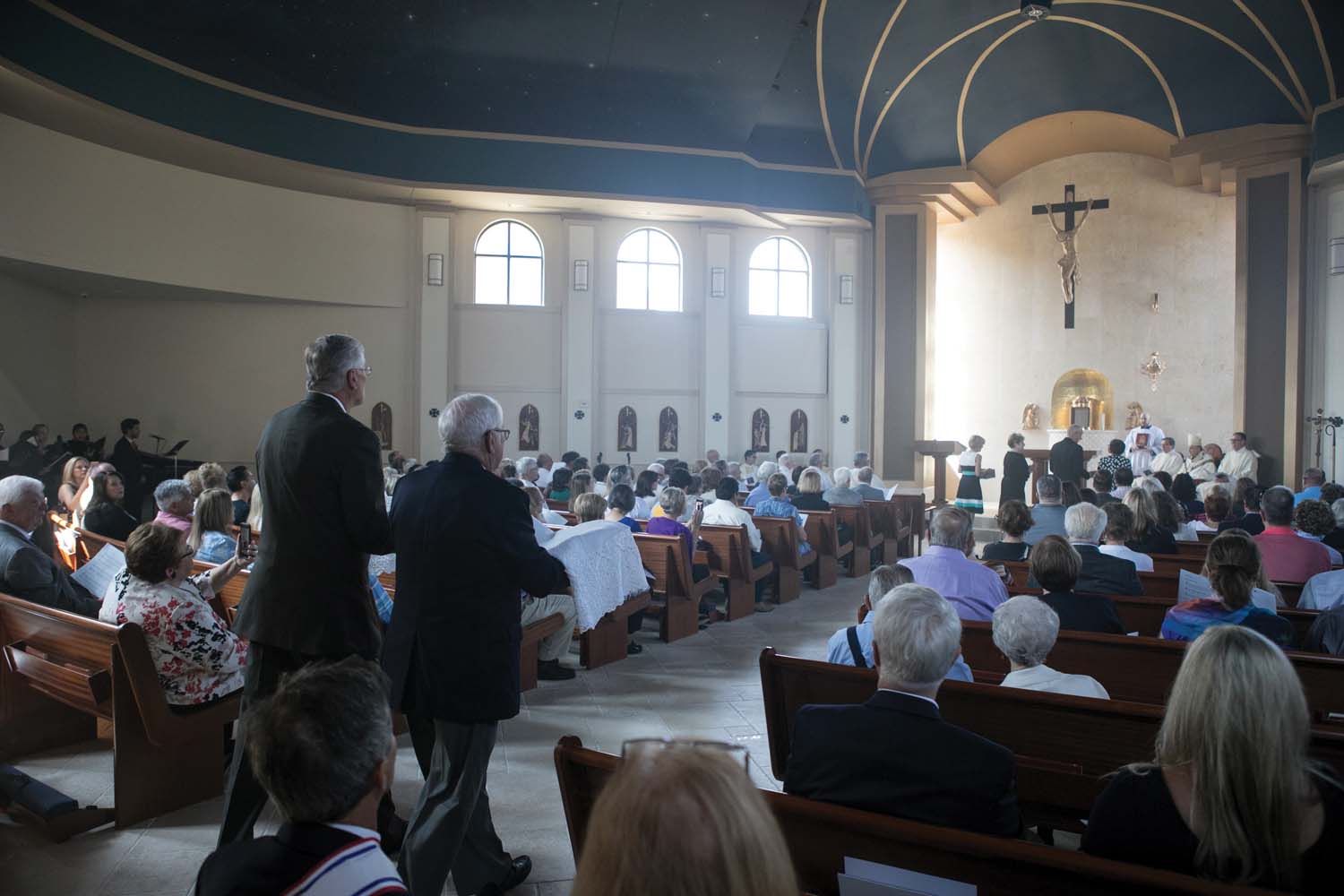 In Kingwood, St. Martha Catholic Church now offers a new place to pray. Inside the newly built Holy Family Chapel, located just to the right of the parish’s large church sanctuary built on the Woodridge Campus off Woodridge Parkway and Northpark Drive in Kingwood.

The more than 6,250 families in St. Martha’s community welcomed the new chapel, which was a gift of former longtime parishioner Pat Reid, who died in 2016. Reid left her estate to the parish so that a chapel would be built. A large quilt hung in the entry of the chapel honoring her memory and generous gift.

The chapel’s dark blue ceiling twinkled even during the day, with gold and yellow stars shimmering to reflect what the night sky might have looked like during the Annunciation. Gold lines led to the altar space, where the golden tabernacle lay inset in a limestone wall that lit up the chapel when sunlight washes across the altar space.

Suspended above the altar is a crucifix fashioned from the pews of the parish’s original church. Jerusalem crosses around the chapel were also made from these same pews. The Stations of the Cross too came from the old church, and an organ was donated from another church community.

For more information and for Mass times, visit stmartha.com.