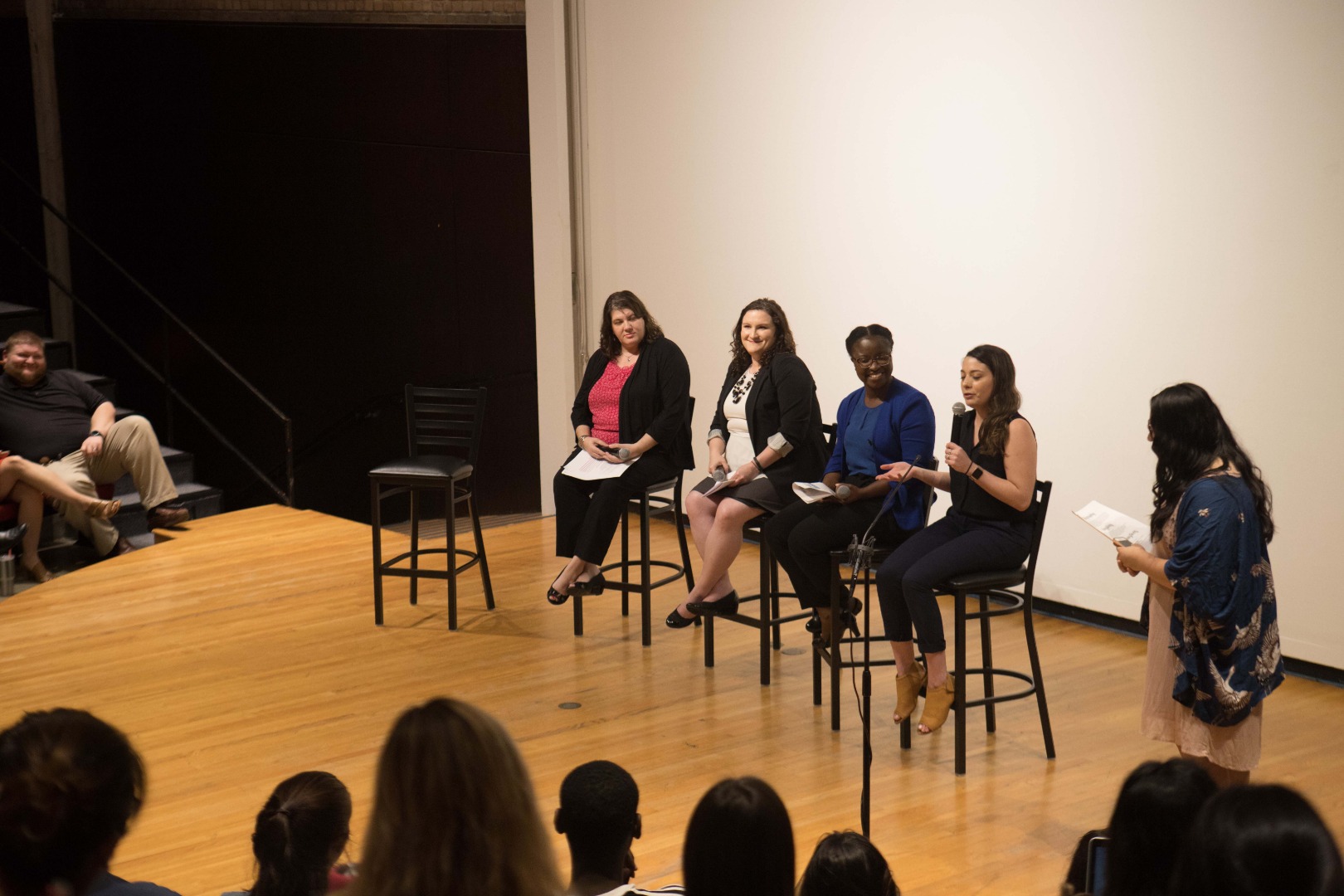 Maria Treviño-Rodriguez, at far right, speaks on a panel at a Sept. 25 immigration forum at the University of St. Thomas, hosted by Catholic Charities of the Archdiocese and the Texas Catholic Conference of Bishops (TCCB). The forum featured Jennifer Carr Allmon, executive director of the TCCB; Elise Griesmyer, attorney for they Catholic Charities’ St. Frances Cabrini Center for Immigrant Legal Assistance; Aisha Koroma, a former refugee from Sierra Leone now working in social services; and Treviño-Rodriguez, an undocumented student and activist at the University of Houston. Photo by James Ramos/Herald.

HOUSTON — When Edrina Villagomez’s parents came to the U.S. illegally, they achieved the dream of her grandfather: to come to ‘El Norte,’ the North, and live and work in the U.S.

A senior international studies major, Villagomez understands and lives the sacrifices her family had to make in order to bring that dream to reality. That reality, a complex web of international and local factors, was the focus of a public immigration forum hosted the University of St. Thomas Campus Ministry, and co-sponsored by Catholic Charities of the Archdiocese and the Texas Catholic Conference of Bishops (TCCB).

Featured on the panel was: Jennifer Carr Allmon, executive director of the TCCB; Elise Griesmyer, attorney for the Catholic Charities’ St. Frances Cabrini Center for Immigrant Legal Assistance; Aisha Koroma, a former refugee from Sierra Leone now working in social services; and Maria Treviño-Rodriguez, an undocumented student and activist at the University of Houston.

Allmon focused on Catholic social teaching, and noted that the Texas bishops’ position is “rooted in human dignity,” believing that enforcement should be targeted, proportional and humane. Efforts should reflect integral human development, and not abridge any basic rights, as well as risk any dangers to immigrants or enforcement, nor should they divide families.

Griesmyer encouraged the audience to maintain an empathetic understanding and have open hearts and open minds in regards to the discussion of immigration.

Likewise, Koroma said to “see the human in someone first,” and that in conversations about immigration to go beyond government labels like refugee, asylee, or immigrant

“These are not immigrant issues, these are people issues,” she said. She lived in a refugee camp in her youth, but came to Houston when she was 14.

“My life is political whether I like it or not,” she said. She highlighted the upcoming November midterm elections, and encouraged everyone to be informed and to vote.

Noting that the immigration issue is both controversial and often difficult to talk about, she encouraged that dialogue begin on common ground.

That common ground in dialogue is what struck Villagomez the most.

“We’re so polarized, and I don’t think we should be polarized,” she said. “It’s just about meeting that common ground and make it a bipartisan issue and not just one party take the whole lead on something ... both parties need to take a conscious effort, and be cognizant in actually making reforms and laws that are going to help immigration.”

Senior theology major Anna Donnelly said, “I think that’s the most important thing as far as knowing what to do and what position to take ... is knowing how people think about it. Because it’s about people, not about policy, right? I think it’s important to go to these things, and I’m glad I did.”

She noted how easily it is to be overwhelmed by the media storm around immigration.

“What struck me most about this is not only how much I need to learn about this, but how to learn about it, whatever the [online] news source was, it was very overwhelming, especially when you’re coming from really knowing nothing. I think something major that I learned is where to learn [from] and how to learn and really how to go about learning. It’s more about a conversation, I think, is the most important part here.”

Father Chris Valka, CSB, university chaplain and directory of campus ministry, said he appreciated the diversity of perspective on an “issue that is very complicated and not one dimensional.”

“The diversity of the panelists to be able to see those who work on the political side of things and really working on bills as well as those who are activists and to be able to see and hear the frustration,” he said. “But see that looking like two very different points of view and the encouragement of students to get involved too, as one person said, not be partisan, but to be political.”

He saw the discussions reflect much of what Pope Francis has focused on during his pontificate.

“Pope Francis has talked frequently about the issue of migrants, migration and immigration,” Father Valka said. “It’s embedded in our Catholic social teaching about the migrations of peoples. This is a human dignity issue. As a diocese in Texas, we are particularly affected by the impacts of decisions that are made at a national level. It affects us at a local level. So, for our students to have a better sense of this is really important.”

Pope Francis, with a network of international relief agencies, called people of goodwill to share the journey with a call to “Share the Journey” and accompany migrants and refugees in all walks of life across the world.

In the past, Daniel Cardinal DiNardo, with a host of other faith leaders, has called for comprehensive immigration policy reform that can lead to citizenship and protect the country’s borders.

During a visit to Brownsville in July, Cardinal DiNardo addressed a myriad of issues, including the shocking separation and detention of minors from their families.

Cardinal DiNardo said the Church was willing to be part of any conversation to find humane solutions because even a policy of detaining families together in facilities caused “concern,” with one solution being family case management rather than detention. The U.S. border bishops have frequent communication with their counterparts in Mexico and Central America on variety of topics, he said, but the problems driving immigration to the U.S. are complex.

In the recently released UNHCR report for 2017, about 25.4 million refugees, more than half under the age of 18, fled their countries to escape conflict and persecution. That’s 2.9 million more refugees than the year before — the steepest increase UNHCR has ever seen in a single year.

But less than 1 percent of the world’s refugees make it through the average two-year UN vetting process to be resettled in other countries while most languish in refugee camps.

The Trump administration slashed the U.S. refugee resettlement quota by more than half, which may only be 30,000 this year, according to news reports.

A recent memo noted major drops in refugees accepted from continents across the world. In Africa, where Koroma came from, 11,000 may be accepted, down from 19,000 in fiscal 2018. In Near East and South Asia, which includes the Middle East, 9,000 may be accepted, down from 17,500. Despite those decreases, more may be resettled from Europe and Latin America and the Caribbean.

Build a road for change

Villagomez said knowing her family’s history helps her to understand her future choices “because now I have the ability and the opportunity to dream as much as I want and think of going ...I can have anything, but [my grandpa] didn’t have that opportunity,” she said.

She encouraged other college students like herself to stay up-to-date on current issues.

“Keep yourself informed and know that you can make a change. And that’s my main thing, yeah. So I think that’s why it’s important for us college students to know about these issues initially. And we are the new generation, and so we want to be the ones to build a road for change.”