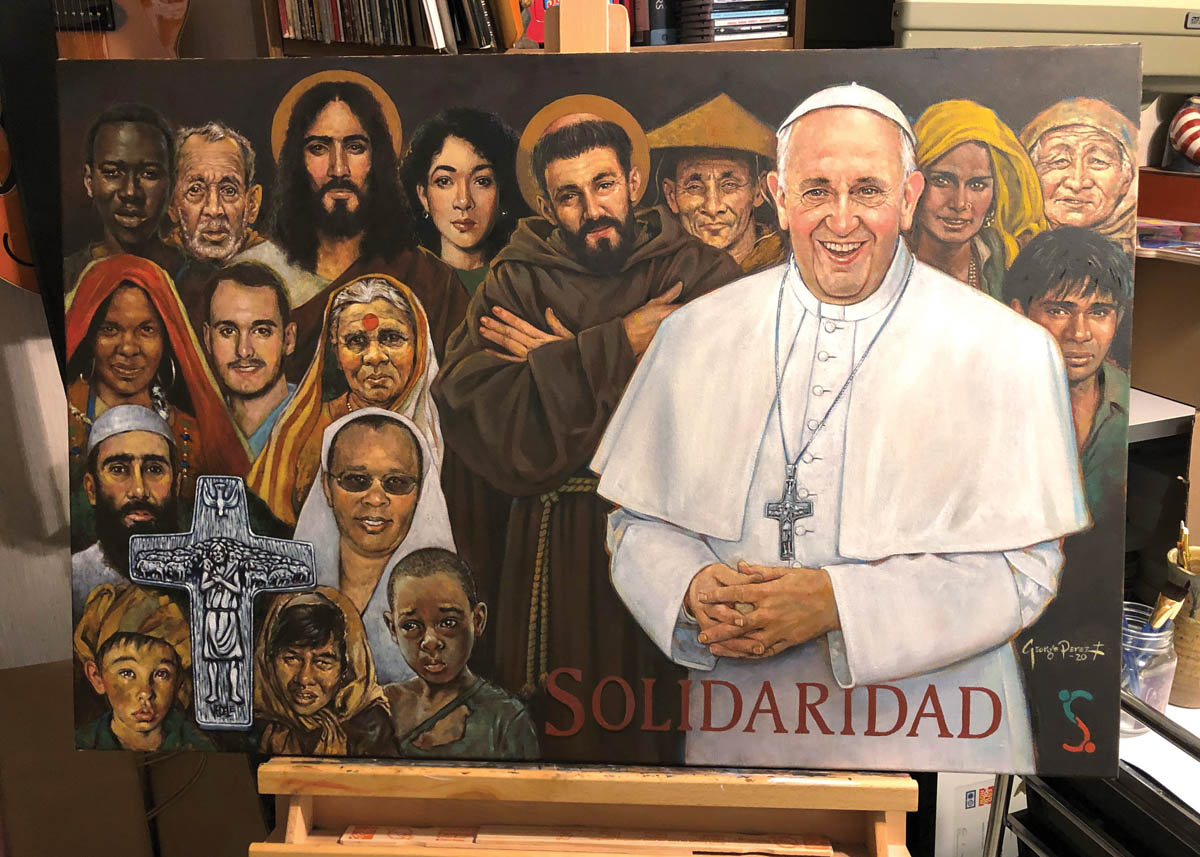 This is a painting by George Perez of Vineland, N.J., that was commissioned by the Global Solidarity Fund, a nonprofit anti-poverty group, and presented to Pope Francis as a gift in late February 2021. (CNS photo/courtesy Catholic Star Herald)

CAMDEN, N.J. (CNS) — As a boy who was constantly filling his notebooks with drawings, George Perez told his father, “My dream is to have my artwork in a museum.”

Both of his parents were supportive of his artistic ambitions and they sent him to the High School of Art and Design in New York City. But his father didn’t want his son to be a starving artist. Have a “plan B,” he counseled. A good mechanic can always get a job, he said.

But Perez didn’t want a plan B. “I had that fire. I had that passion for art,” he told the Catholic Star Herald, newspaper of the Diocese of Camden.

Perez doesn’t have paintings on the walls of the Met, the Guggenheim or the other museums he used to visit when he lived in New York.

But he was able to tell his devout Catholic father — before his recent death at age 90 — that he is now in the company of Michelangelo, Raphael, Leonardo da Vinci and other great artists whose work is owned by the Vatican.

One of his paintings, an image of Pope Francis, was recently presented as a gift to the pope.

“He was so excited. Makes it so special,” Perez recalled of telling his father the news. He noted his wife commented that the Vatican, with its vast holdings, is “the greatest museum in the world.”

Perez, a Vineland, New Jersey artist, was commissioned last December to paint a portrait of Pope Francis by the Global Solidarity Fund, a nonprofit anti-poverty group. The painting was to be a gift for the pope.

The person who brought the artist and the nonprofit together was Patrick McGrory, a member of the Global Solidarity Fund board as well as the Camden Diocesan Finance Council. He and Perez’s wife of 40 years, Donna, have worked together professionally, and he admires the artist’s talent.

When the Global Solidarity Fund was looking for an artist, McGrory showed representatives a painting Perez had done of the singer Patrizio Buanne and his favorite saint, St. Pio of Pietrelcina, or Padre Pio as he is best known.

Perez got the commission, did some quick and intense research on the nonprofit and Pope Francis, brainstormed with McGrory, and came up with a concept meant to convey the pope’s loving concern for the poor throughout the world: He would paint the pope in the company of Jesus, St. Francis of Assisi and people of different ages and ethnic groups.

In all, the canvas depicts 18 individuals. The Norman Rockwell-style oil painting also includes a detailed reproduction of Pope Francis’ pectoral cross, which features an image of the Good Shepherd.

Once the concept was approved, Perez got to work — feverishly. Taking into account the time needed for oils to dry, to have the work framed and sent to Rome meant Perez had only two weeks to paint.

“That was crunchtime. I had a large pot of coffee next to me. I had to use every minute of those two weeks,” Perez said with a laugh.

“I carved out some time to talk to my wife and maybe have dinner, but I had to exclusively focus on the painting,” he added. “I was very happy to have met the deadline.”
The project was challenging but also inspiring, Perez said.

“I thought, ‘There is the pope — he will actually be touching my painting. How about that,’” he said. “To be able to illustrate the pope’s vision and tell a story about helping the poor, to paint his cross and the story it tells from Scripture — it was a spiritually rewarding experience. This was not just another job. Spiritually and physically, I was all in.”
Perez has three children, three grandchildren and another on the way. In addition to portraits — a lot of athletes and entertainers — he has done book illustrations, logo design, murals and caricatures. His website, www.gparts82.com, shows the variety of his work.

When he was working on his painting of the pope, he searched the internet until he found a statue of St. Francis of Assisi he wanted to work from. “I did make one tweak. The eyes were closed. I wanted his eyes open — and him smiling,” Perez said.

Originally, representatives of the Global Solidarity Fund were to take the painting to the Vatican themselves and present it to Pope Francis during a meeting, but the trip was canceled because of COVID-19. Consequently, Vatican officials presented Perez’s work to the pope.

The artist soon received photographs of a Vatican room containing a painting on the wall, a statue on a pedestal and, on an easel, his portrait of the pope surrounded by Jesus, the people of the world and a smiling St. Francis.

“I’m excited to share these pictures with you,” Perez said in a message with the images posted on Feb. 27 on his Facebook page. “So overwhelming to see a piece of my artwork in the Vatican. Humbled, to say the least.”

The photos show the flesh and blood Pope Francis, seemingly delighted, as he examines the painting.

Like his painted image and the saint whose name he took, the pope is smiling.