Origins and meaning of the Christmas nativity scene

By Brian Garcia-Luense, Office of Evangelization and Catechesis 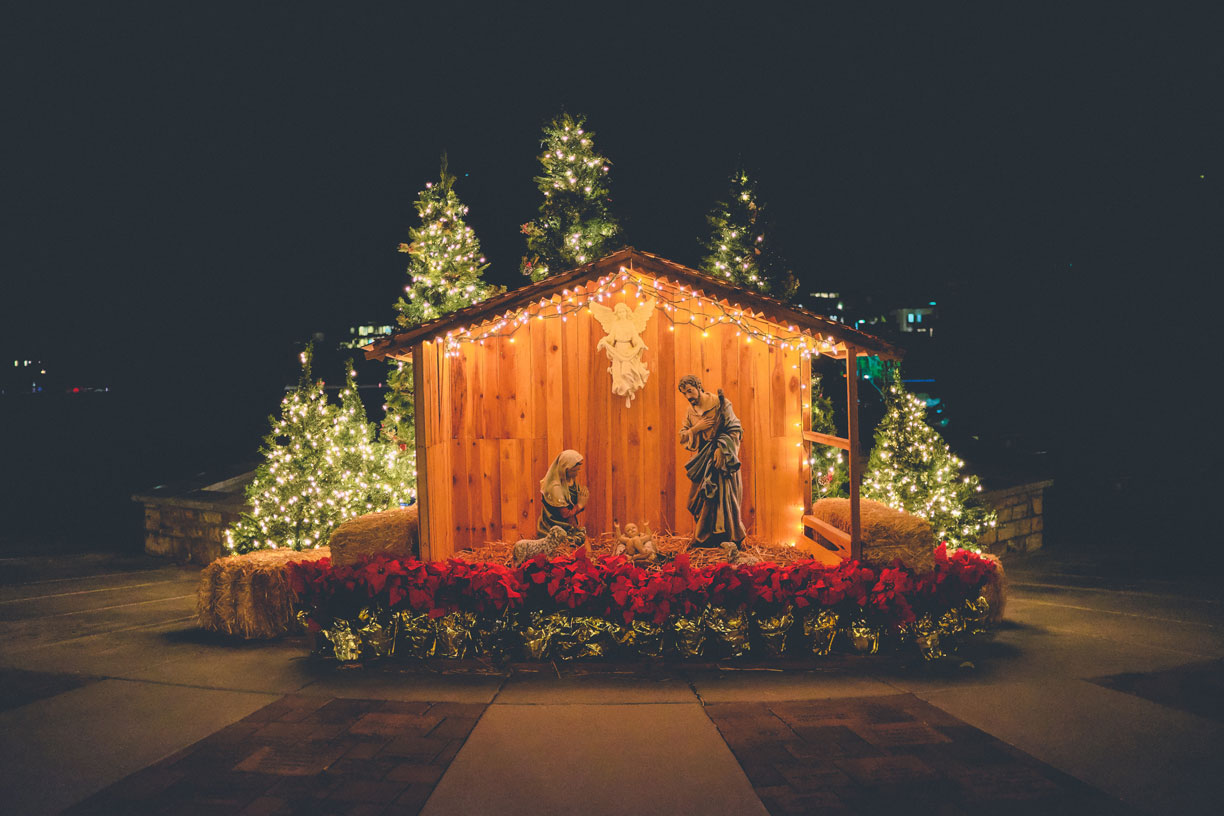 Christmas nativity scenes are among the most common things associated with the season that we encounter at Christmastime. They are in shopping centers and in front yards.

They are in our churches and in our homes. Some are elaborate, with dozens of figures. Some are simple with just Joseph, Mary and Jesus. Some are exquisite works of art and some are the work of preschoolers with construction paper and glue. Some even include live people and animals.

Given their near ubiquity, it may come as a surprise to some that they have been around for “only” about 800 years. Exploring their origin may help us to more profitably engage with them today.

The first recorded instance of a nativity scene set up for the purpose of popular devotion at Christmastime dates to the year 1223 in Greccio, Italy. It was St. Francis of Assisi himself who directed that a cave near that town be set up with a manger, hay, and an ox and ass. Mass was celebrated during the night of Christmas Eve in that cave at which Francis served as the deacon, proclaimed the Gospel and preached. From that first instance came the tradition of the Christmas Nativity scene.

While many motivations have been ascribed to Francis as to why he initiated this practice, it is worthwhile to look at what he himself had to say on the subject. Thomas of Celano, Francis’ first biographer, writing only three years after the saint’s death and only six years after the events at Greccio, purports to quote the saint himself in the instructions he gave regarding the preparations for that Christmas.

He writes: “‘If you desire to celebrate the coming feast of the Lord together at Greccio,’ he said to him, ‘hurry before me and carefully make ready the things I tell you. For I wish to enact the memory of that babe who was born in Bethlehem: to see as much as is possible with my own bodily eyes the discomfort of His infant needs, how He lay in a manger, and how, with an ox and an ass standing by, He rested on hay.’” The primary motivation of Francis, it seems, was to experience as richly as possible the poverty of the nativity.

Poverty, of course, played a particularly important role in the religious imagination of Francis and the Franciscan movement he inspired. For Francis, Jesus was always to be understood as the poor and humble Christ. Thus, Franciscan poverty must be understood from the perspective of Francis’ understanding of the poverty of Christ.

For Francis, that poverty was not merely a description of the physical conditions under which Jesus lived in first century Palestine (though he certainly believed that to be true as well), but an important theological claim. Francis understood the theological poverty of Christ to be especially manifested in three ways: the fact and manner of His Incarnation, the fact and manner of His death, and His continuing physical presence through the Sacrament of the Most Holy Eucharist. Thus, the poverty of Christ could be summed up for Francis as crib, cross and altar.

The theological poverty of Christ as evidenced by the fact and manner of the Incarnation lies in the understanding that the eternal Son, who enjoys the richness of being the infinite and limitless God, voluntarily takes on human limitedness and finiteness. This self-emptying and self-abnegation is an ultimate act of poverty.

If the fact that the Incarnation represents a profound poverty were not enough to make the point, Francis wishes to drive home the point that Christ not merely became human to be like us, but also that he became human in the most humble manner possible.

The poverty of Christ in the cross lies primarily in the poverty of obedience. The Passion represents the highest pinnacle of Christ’s obedience with the voluntary renunciation of His will. It is not coincidental that the great devotional office Francis composed is centered on reflections around the Passion.

The “psalms” that Francis composed for this devotional office are nothing more that strings of biblical quotes taken mostly from the Psalms themselves, but done so in a way that they tell the story of the Passion in a moving and organic way. They capture beautifully the reality of the abandonment experienced by Christ and formed a point of daily reflection for Francis.

The understanding of Christ’s poverty in the Eucharist is perhaps the one hardest for us to understand today. For Francis, the Eucharistic species becomes the only way in which Christ remains physically present to the Church. How is it that the Sacrament by which Christ remains present to the Church and literally feeds those who follow Him can be understood as a form of poverty?

It is in the fact that Christ chooses to continue to be present physically — a sort of continuation of the Incarnation. Also, poverty is exemplified in the fact that the unique expression of His continued physical manifestation lies in the simple elements of bread and wine and not something more exalted.

As we celebrate Christmas and as we encounter and admire the many nativity scenes all around us, may there be occasions for us to remember and reflect on how this great feast is a feast of the poverty of Christ. May we who are called to follow after Him find in the feast and its reminders the grace to empty ourselves and submit our wills to our heavenly Father and so become poor ourselves in imitation of the poor and humble Christ.

Brian Garcia-Luense is an associate director for the Archdiocesan Office of Evangelization and Catechesis.