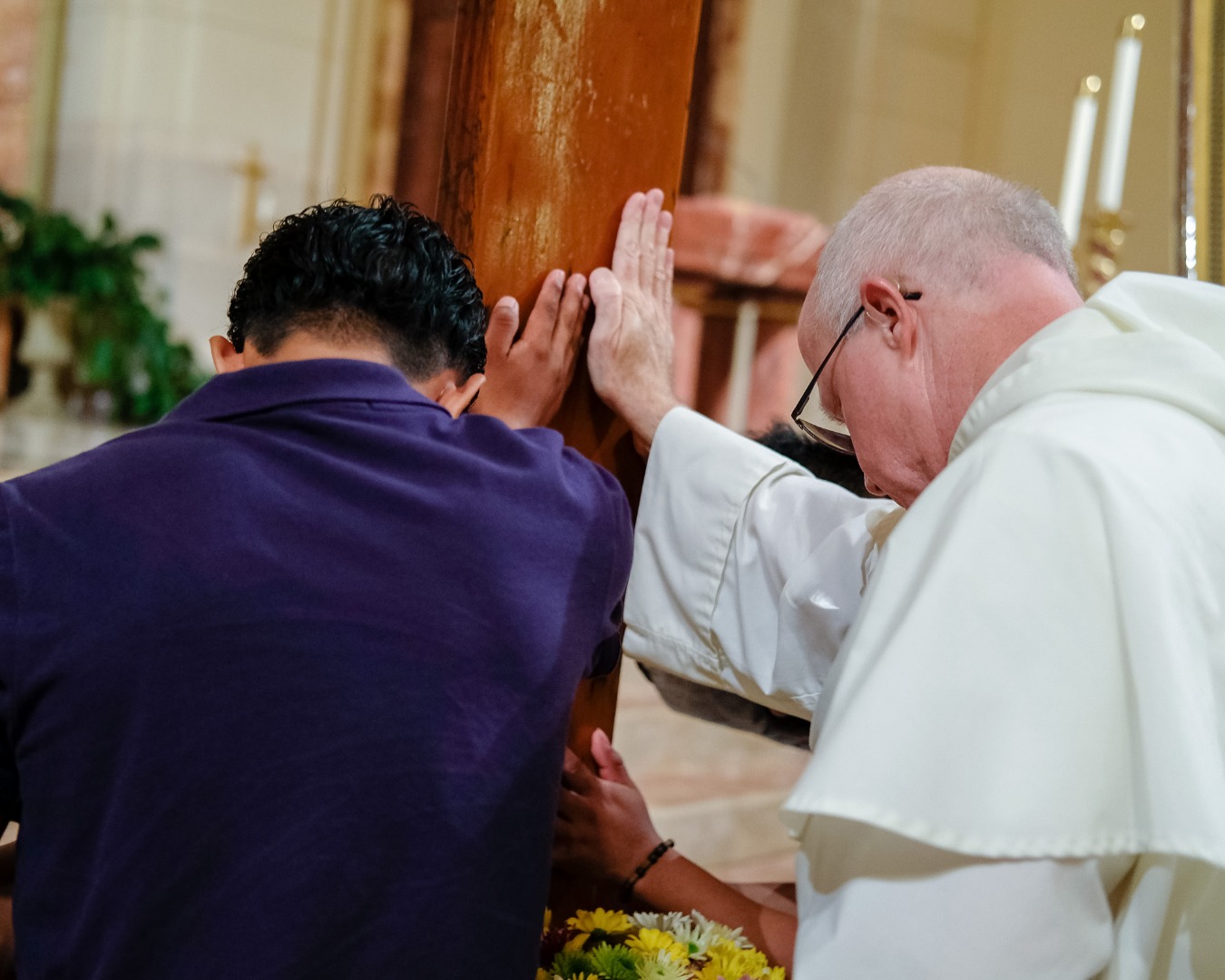 HOUSTON — Despite the nearly 100-degree temperatures, Jaime Reyna found purpose in his four-hour drive from Corpus Christi to Houston.

With five teens from the Diocese of Corpus Christi, where Reyna serves as the youth ministry director for the Corpus Christi Diocese, he made a pilgrimage to the Co-Cathedral of the Sacred Heart in Houston, which was hosting the World Youth Day Cross and Marian icon on Aug. 23.

The two symbols of World Youth Day, the massive international celebration of the Catholic faith with young adults to be held in Panama in January with Pope Francis, visited the Archdiocese nearly one year to the day since Hurricane Harvey came ashore in 2017. The storm devastated several dioceses along the Texas Gulf Coast, including Reyna’s Corpus Christi, Victoria, Galveston-Houston and Beaumont.

More than 1,000 people joined Reyna for the 3.5-hour long celebration, which included veneration and procession of the WYD Cross and Icon, as well as a Liturgy of the Word presided over by Galveston-Houston Auxiliary Bishop George A. Sheltz.

Reyna’s teens helped to carry the cross, which he said was a blessing.

“The fact that ... they were going to be able to touch and carry the cross just like they do at World Youth Days, that some of them will never experience for different reasons, the fact that they were able to carry it here, they’ll have a story to share with not only their friends, but maybe their future children. It meant a lot for them, and they shared it with me and I think they’re looking forward to share it with everybody else at home.”

After the procession, English, Spanish, Vietnamese, African Descent, Filipino and Chinese community choirs from across the Galveston-Houston Archdiocese joined to lead worship during continued veneration.

In his homily, Bishop Sheltz confronted the scandals that have rocked the Catholic Church in recent weeks.

“I was very upset, how things were covered up by the (church) authorities and the bishops,” Bishop Sheltz said. “It made me mad, but I can’t just sit here and be mad.  As a bishop, it’s part of my responsibility that we don’t let these things happen again.  As a Church, we must stand up and pray for those who have been hurt, whose lives have been damaged. I ask you to do the same thing.”

He encouraged the young people to look to the cross and focus their prayers to lift up the survivors of clergy sexual abuse.

“Each one of you young people are facing difficulties in your life all the time,” Bishop Sheltz said. “You have crosses that you must bear. Know that Jesus hung from a cross just like this one. We are called today to be the servants of the Lord, we have to be like Mary and say yes to the Lord. He will guide us. Will it be easy? No, (but) as long as you put your focus on that cross, you know that all things can be conquered.”

And to those going to Panama, he said “be great witnesses of God’s love. Be good examples of what it is to be a Houstonian and a Texan. Say ‘howdy’ to everyone. Be proud to be a Catholic-Christian, and be willing to serve God in everything that you do every day of your life.”

“It was comforting to know that someone like Bishop here spoke to the young people about that,” he said, “because young people are hearing things on the news and social media, and unless we speak about it now, they’re going to hear it from somewhere else and they may not hear the whole truth. But more importantly to hear the fact that the Church in some parts of it failed, but also that there is a growing part of this, a growing pain that we can learn from and together if one hurts, we all hurt.”

Karaszewski said it wasn’t a coincidence that the symbols came to the U.S. this week.

On its pilgrim journey to WYD, she said the symbols visited Puerto Rico after the deadly Hurricane Maria; Nicaragua as it experiences severe civil unrest, Puebla, Mexico following the major earthquakes. The week, the cross visits Miami, Washington, D.C. and Los Angeles as the U.S. Catholic Church reels from recent abuse scandals.

“And it’s never been planned, like things were happening there,” she said. “I think this cross has a meaning when it visits a place, to redeem everyone around it.”

Lani and Ray Macusa both saw the future of the church all around them as they sang in the Filipino choir during the prayer service.

The Macusas attend St. Ignatius of Loyola Catholic Church in Spring, the north Houston parish which was severely damaged by Harvey’s floodwater. Still, despite a journey as a displaced parish and even the recent scandals, they said they are remain committed to their Catholic faith and will continue be strong in their faith that they share with their children.

Seeing the symbols travel from Panama, the same cross and icon that were given by St. John Paul II to the youth in 2003, helped their faith, they said.

Lani, who came from her job as a nurse to attend, said “we were so glad to be here and excited to be here watching all the young people and participate that with them. We loved seeing the youth worship.”

Throughout the evening, as Lani and Ray sang in the choir loft above, Father Richard McNeillie joined several of his brother priests in hearing dozens of confessions.

“Tonight was about the Holy Spirit being with the young people,” he said. “I like just being here, seeing all these young people gathered together, the number and diversity from all over.”

Father McNeillie, the director of the Archdiocesan office of vocations, said “It’s always great to see God’s action and people’s conversion. Like whenever somebody comes to confession, they are converting in that process, and that’s such a beautiful thing to see, like people coming back to the Lord.”

That evening’s visible experience of redemption motivated Karaszewski, who attended World Youth Day in Krakow in 2016.

“It’s amazing. It’s like the presence of John Paul II in Houston,” she said. “It also made its way here for all these young people who don’t have papers to travel and be part of world today, so world today came to them. It’s part of the pilgrim cross, that wants to unite everyone. It’s not only waiting for us to go to Him, but He comes to us.”

The symbols also visited the nearby University of St. Thomas the next morning Aug. 24. An hour-long prayer service with the cross and icon that was focused on healing and reconciliation was held at the Chapel of St. Basil.