Nuns on the run: 30-plus religious sisters, thousands of Steps for Students supporters 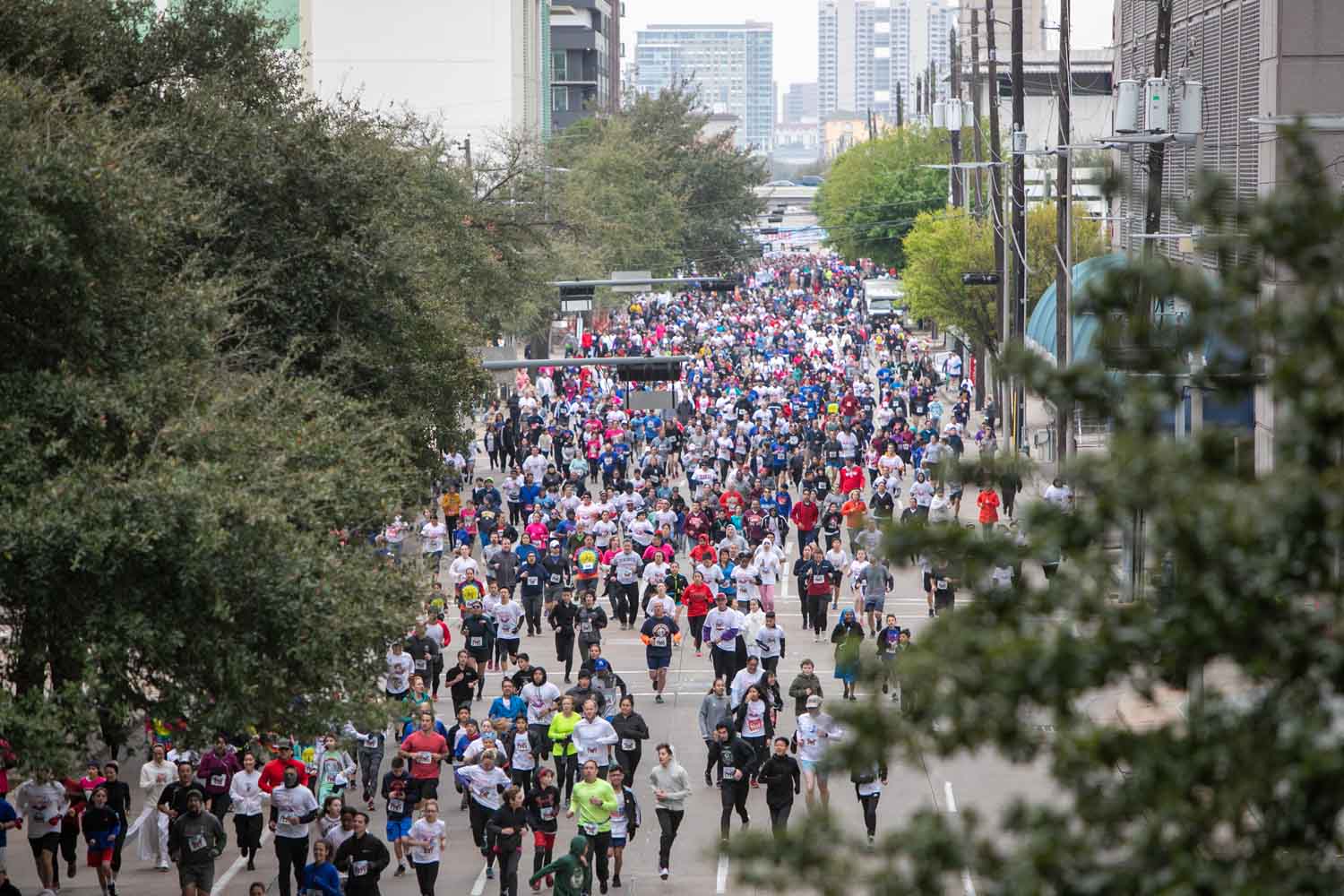 Nearly 10,000 turned out for the 2020 Steps for Students 5K Run/Walk race in downtown Houston on Feb. 15. Photos by James Ramos/Herald.

HOUSTON — The Vietnamese order of the Dominican Sisters of Mary Immaculate Province always catches the eye when they fly by with their long white habits flapping in the wind during the Steps for Students 5K Run/Walk.

At this year’s Feb. 15 event, the religious sisters showed up with an even bigger group.

“We have 30 of us running out of about 100 sisters, so this is our largest group ever of runners,” said Sister Mary Magdalene Nguyen, OP. “It is part of our charism, our mission to provide a Catholic education for the young.”

Many of them teach catechism both at their churches and at the order’s Mary Immaculate Preschool off SH 249 and Antoine. “We naturally enjoy being with children and having them see us running and supporting Catholic education,” Sister Nguyen said. 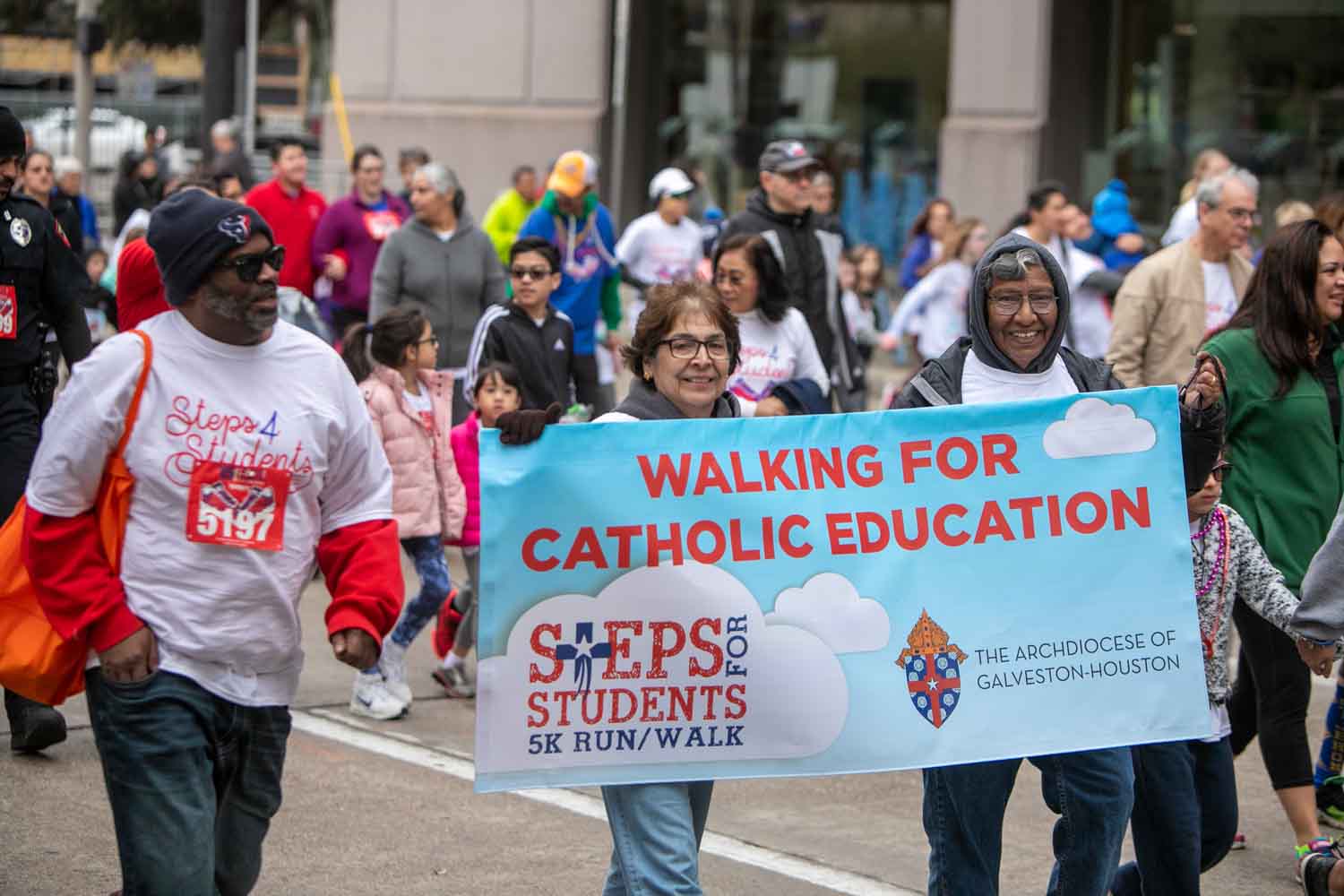 IN PHOTOS: Thousands dash through downtown for Catholic educations

They joined thousands of other participants – some 9,628 – and the priests were not to be outdone. Holy Family Parish pastor Father Jude Ezuma wearing an Afro wig and Father Albert Zanatta with dyed blue hair, matching the colors of Assumption Catholic School, and other supporters raised more than $532,000 in donations, with fundraising efforts continuing until Feb. 21.

That total does not include underwriting or registration fees, which will bring in thousands of dollars more. The funds are allocated to the schools for tuition assistance scholarships and purchasing needed equipment, including computers for the students, said grand marshal Debra Haney, superintendent of Catholic Schools.

The tailgating party at the Catholic School Village stayed in full swing throughout the morning with tents and booths from many of the schools decked out in varying themes, and the nearby towering rock wall brought in from Camp Cho-Yeh drew gazes upward. St. Francis of Assisi Catholic School lent out colorful capes and masks for kids to turn into superheroes and pose for printed photos given as a Steps souvenir. 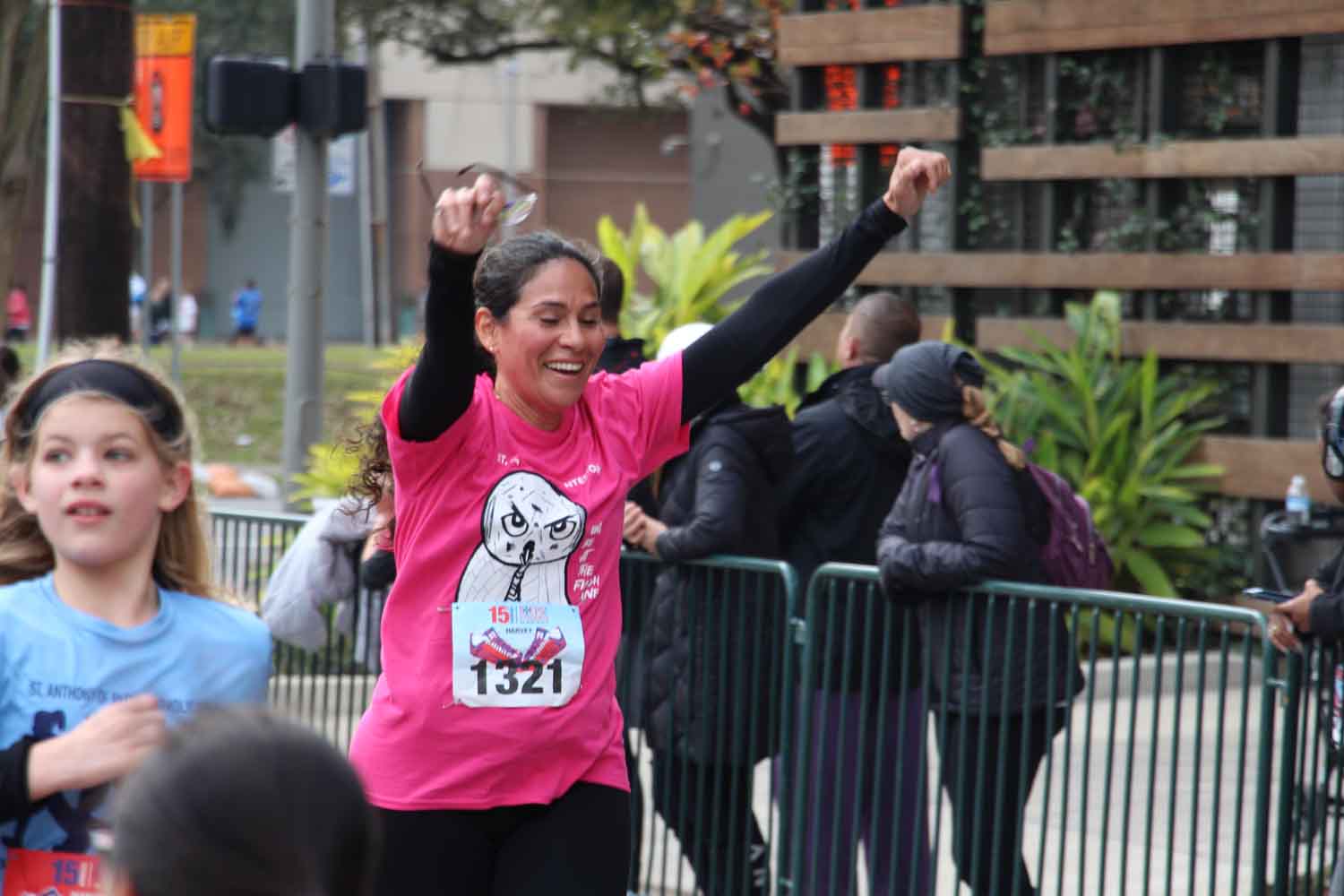 After a blessing from Daniel Cardinal DiNardo, a blast from the start gun and release of confetti officially sent the crowd on their way with timed runners at 8 a.m. and walkers afterward.

The course, which started and ended near the Co-Cathedral of the Sacred Heart, featured a four-block straight dash to open the race. Then, winding through downtown on Leeland Street, the course crossed over US 59 on a bridge into the East End’s trendy East downtown neighborhoods colored with bright graffiti and urban art.

Runners zipped behind St. Nicholas Catholic Church, the historic parish on Bell Street, and a few landmark Houston restaurants, before once again dashing over US 59 for the final mile. Soon they passed St. Joseph Hospital and its oasis-like Sisters of Charity Park before sneaking under I-45 for a quick two-block turn that led to the finish line on Jefferson Street.

The mariachi band, waiting near the end, also serenaded participants as they crossed the finish line. By mid-morning, the sun burst through the overcast sky to warm up runners and walkers, including families, some pushing strollers, other little ones in wagons and even scooters and mini-bikes. 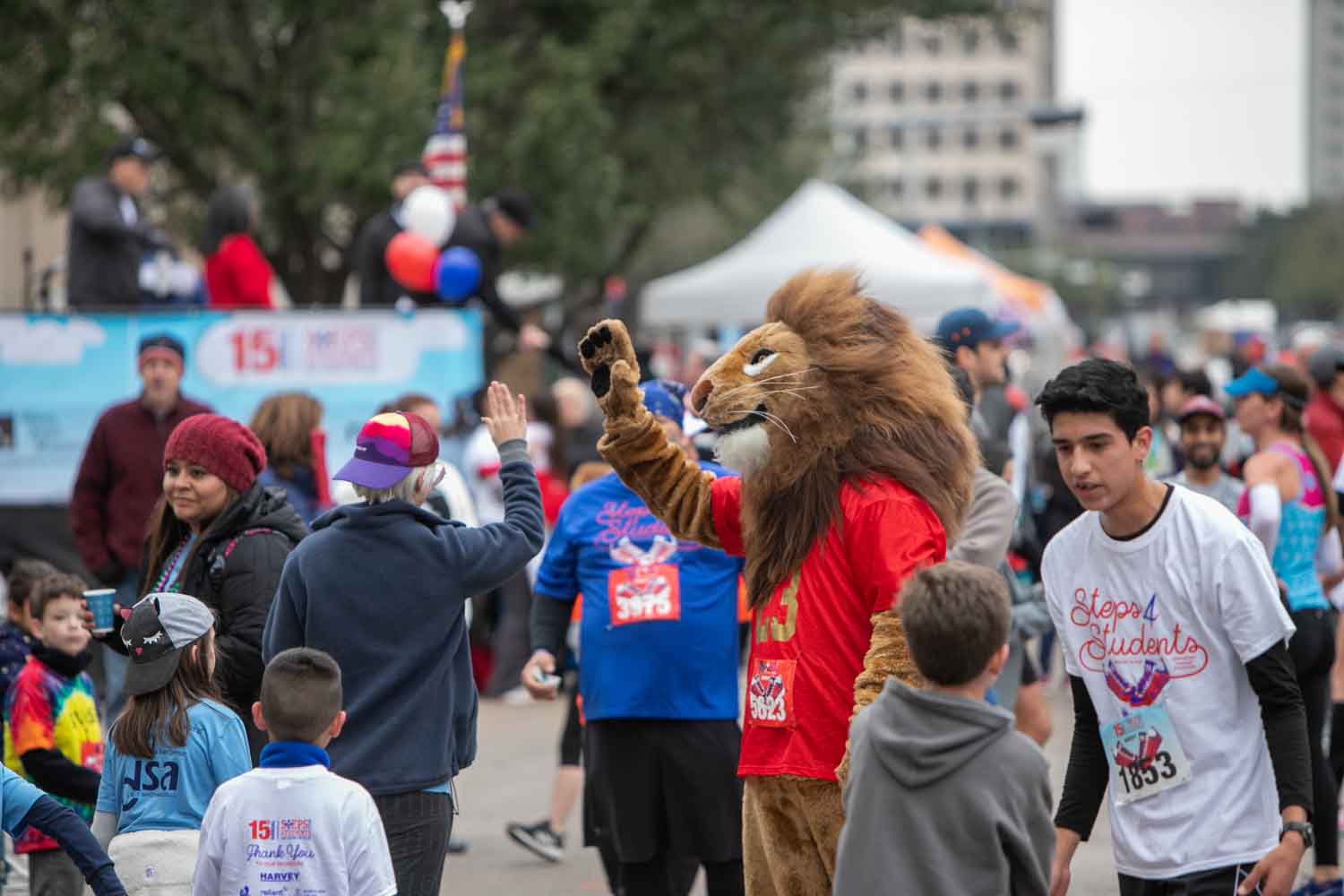 Many racers made new personal records that day, some remarking that the upbeat cheers from students and families encouraged them to make their goal. Reese Vannerson of Strake Jesuit College Preparatory was the top male finisher with a time of 17:15, and top female finisher was Jackie Tobin with a time of 18:15. Top finishers in the Masters category, which is 40-plus, were male runner David Harvey and female Sheridan Murphy.

Incarnate Word Academy, the downtown Houston all-girls Catholic high school, also won the President’s Cup. To encourage more high school participation in what is one of the largest 5K school races in the country, a foot-and-a-half tall silver-hued metal trophy called the President’s Cup was created last year. The winner is the high school with the largest percentage of participation in Steps for Students based on enrollment.

Organizers say they will have to work extra hard to top Steps for Students with next year’s race set for Feb. 20, 2021.