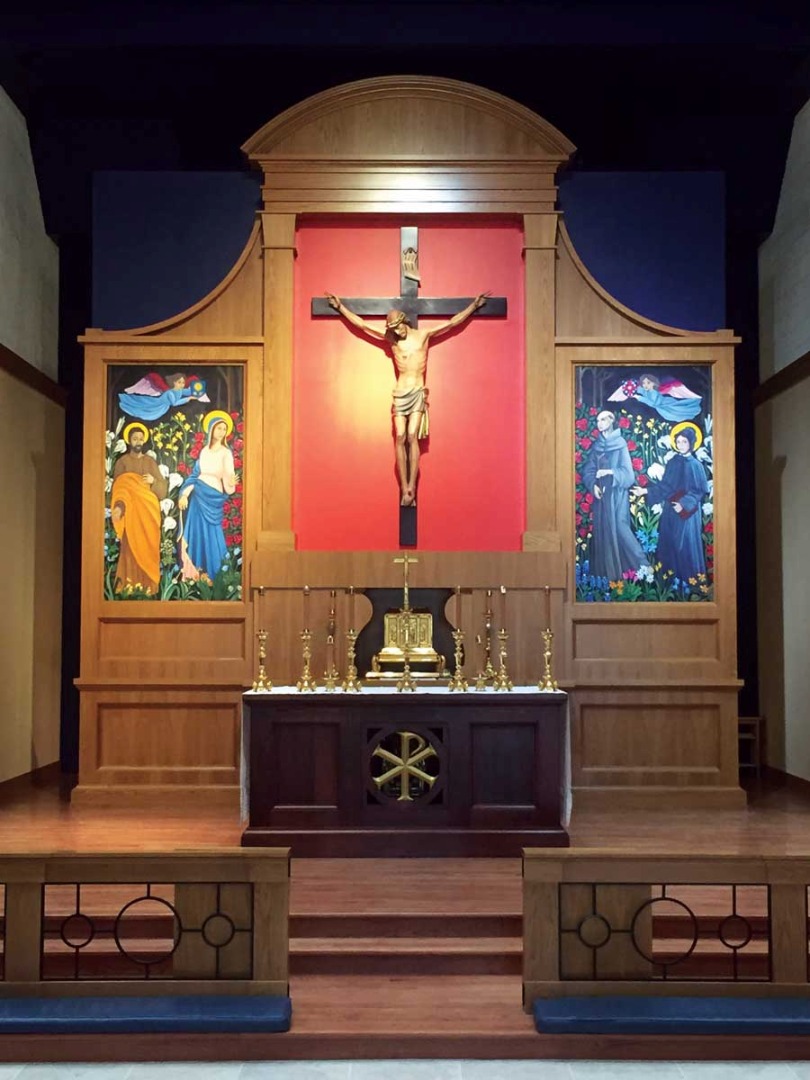 HOUSTON — A teacher, a missionary and the parents of Jesus join together in a unique altar display at St. Elizabeth Ann Seton Catholic Church.

Two retablo paintings have been installed in the sanctuary, which completes an altar renovation the parish began in 2015.
The two paintings sit to the left and right of a larger crucifix, which is the central piece of art over the altar.

The painting on the left includes the Blessed Virgin Mary and St. Joseph. Mary is surrounded by roses to show her love and faithfulness to God as she looks toward her Son on the crucifix.

St. Joseph looks to the congregation, his outstretched hand an invitation to join the Holy parents at the foot of the cross. Above Mary and Joseph is an angel, holding a shield with Pope Francis’ coat of arms, symbolizing the connection to the universal Catholic Church.

The painting to the right of the crucifix features ties to the local Church. St. Elizabeth Ann Seton, patron of the parish and school is shown in a field of flowers, holding a book.

St. Elizabeth Ann Seton was the first native-born American to be canonized. She founded the first Catholic elementary school in the United States and is considered to be the mother of the parochial school system in America.

Beside her is Venerable Antonio Margil, O.F.M. Father Antonio Margil de Jesus was born in Spain and became a Franciscan missionary. He volunteered to come to the Americas to help establish Catholic missions in 1683. After teaching and working in Yucatan, Costa Rica, Guatemala and Mexico, Father Margil was called to Texas.

From 1716 to 1722 he worked at several missions in Texas including the Alamo; he also founded Mission San Jose in San Antonio. The bluebonnets at Father Margil’s feet are a reminder of his missionary efforts in Texas, which served as a gateway for Catholicism in Texas.

As he is not yet a Blessed or canonized Saint, Father Margil’s image does not include a halo. He died in Mexico City on Aug. 6, 1726 and was declared venerable in 1836 by Pope Gregory XVI.

The angel over St. Elizabeth Ann Seton and Father Margil holds the shield of the Archdiocese of Galveston-Houston.
The paintings were crafted by local artist Carmen Sanchez Romero.

She studied fine arts and art history at the University of Murcia in Spain. She has commissioned works for Boeing Corp. in Madrid and St. Teresa Catholic Church in Sugar Land and many private collectors.