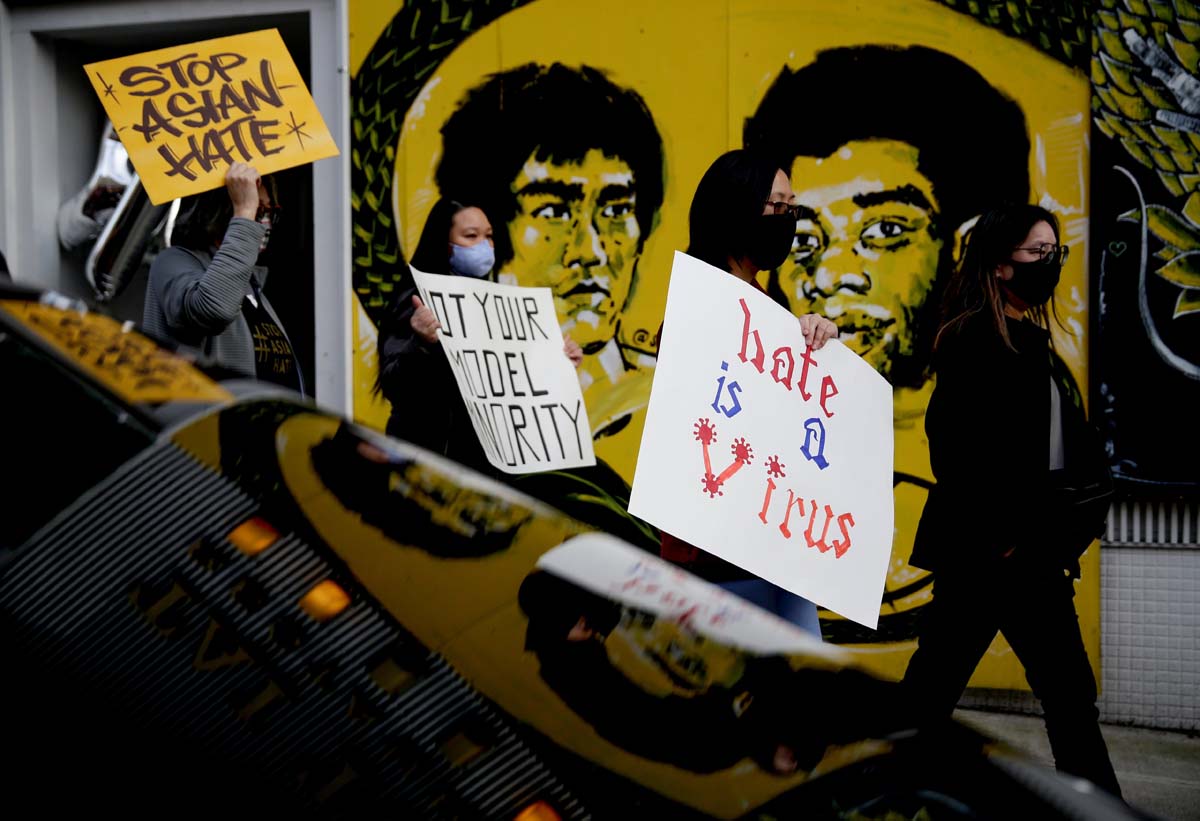 Marchers in Seattle walk by a mural of Bruce Lee and Kareem Abdul-Jabbar March 13, 2021, during a protest against anti-Asian hate crimes. A recent June 26 meeting gathered faith and ministry leaders in the Archdiocese of Galveston-Houston to encourage dialogue and inclusion efforts at the parish level. (CNS photo)

HOUSTON — In the Archdiocesan Pastoral Council’s (APC) June 26 meeting about inclusion and racism, Family Life Ministry Director Ricardo Medina used the analogy of an iceberg to highlight how people relate to each other.

As participants found out during the break-out exercises, being a parent, a migrant, dismissed from the seminary or retired, for example, are life-defining experiences that require more than a visual inspection. Such experiences require dialogue, and it is dialogue that should be the starting point to encourage inclusion and combat racism, according to Medina.

“It’s more about seeing the other person as they truly are,” he said. “It doesn’t mean we have to forget they are male or female or black or white, but it’s about understanding there are other things that are more important.”

The APC has put together what’s called the Inclusion Advocate Guide for parishes, ministries and families to use to help them address racism and promote inclusion, which Medina acknowledged could be both “daunting” and “boring.” He said the task now is to have champions at the parish level who can use the guide to take tangible measures to promote human encounter, respect and anti-racism, and ensure those measures continue.

Medina said one of the activities in the guide that parishes can do is to look at who is in the pews, and if it’s not reflective of the wider Catholic community, then try to figure out why and be more intentional about welcoming people from diverse backgrounds and giving them a voice.

“You can tell if a parish is fully embracing everyone,” Medina said. “I am saying, ‘go and check.’”

“We are still in awareness, although sometimes all three are going at the same time,” he said. “We want to keep the conversation going.”

Jackie Burkhalter, APC vice chair, acknowledged the difficulty of talking about racism but said resources like the Inclusion Advocate Guide are helpful in starting a dialogue about biases, awkwardness and racism with open hearts.

A good conversation, Medina said, would be about appreciating each other and not going on the defensive. He stressed that the conversation should be in the right context and actively incorporate Scripture and the voice of Christ.

Other participants in the meeting offered their thoughts. Patty Sobelman likened racism to living in the darkness, a reference to John 2.

“That darkness makes you less open to discovering new things,” Sobelman said. “We each have the opportunity to bring lightness. It’s our call to see each other as the child of God in the darkness.”

Burkhalter, who represents her home parish of St. Angela Merici in Missouri City, pointed to the prayer practice of Lectio Divina as a good way to have a dialogue about racism — the idea being to think deeply and respond thoughtfully while adhering to the Scriptures.

“We know racism exists in some form or other in our people, in our parishes and in ourselves,” said Daniel Cardinal DiNardo in summation. “If we do some of these exercises and move it to Lectio Divina, we have to look at the responses, and there are some areas here that we’re going to have to look at — and that can only be good.”

Cardinal DiNardo said there is a way to interest people without smashing them on their heads into seeing some of their biases and biases that may be in the parish. Doing so doesn’t look as though they are being manipulated.

“If we can do this, it will be of great help for furthering and deepening communion in the parish,” he said.