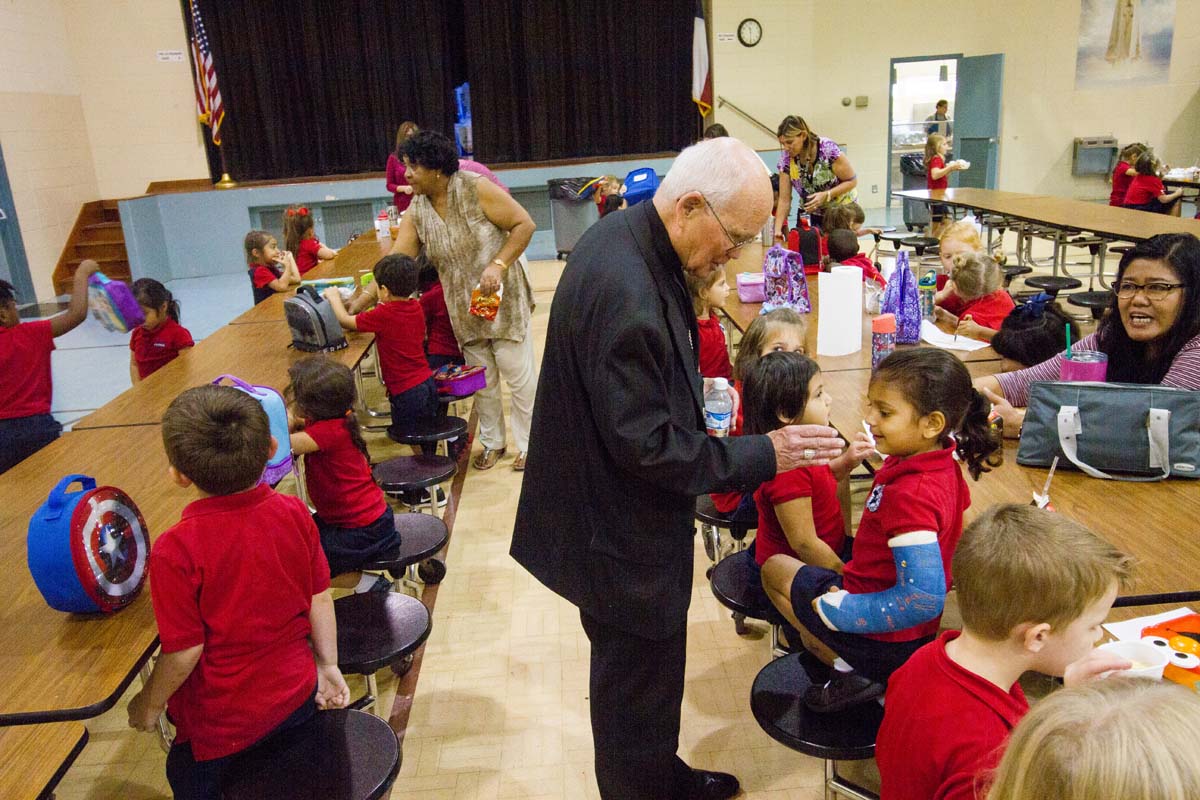 During a Sept. 25 visit to Our Lady of Fatima Catholic School in Texas City, Texas, retired New Orleans Archbishop Alfred C. Hughes blesses a student from True Cross Catholic School who broke her arm evacuating during Hurricane Harvey. Students from True Cross in Dickinson, Texas, are temporarily meeting at Our Lady of Fatima while their school is being repaired. Photo by James Ramos/Herald.

TEXAS CITY — Meandering slowly, New Orleans Archbishop Emeritus Alfred C. Hughes greeted each and every student and teacher inside the Our Lady of Fatima Catholic School in Texas City.

If it weren’t for the differing logos, students of True Cross Catholic School in Dickinson were blending right in with Our Lady of Fatima students.

True Cross students are meeting for classes and activities at Our Lady of Fatima while the Dickinson parish works on repairing damage to their facilities after Hurricane Harvey decimated the school and parish. Nearly all 153 students made the temporary transition to Our Lady of Fatima’s campus in nearby Texas City. The New Orleans archbishop visited the schools on Sept. 25.

Harvey dumped nearly 44 inches of rain in Dickinson, swelling the nearby bayou straight into True Cross. Our Lady of Fatima was spared, but Texas City still saw nearly 30 inches of rain.

The experience of recovering after a disastrous hurricane was nothing new for Archbishop Hughes, who was at the helm of the New Orleans Archdiocese when Hurricane Katrina wrecked the Crescent City in 2005. The stories and images from Houston reminded the Archbishop of his experiences during Katrina and felt called to help.

Help us help others. Give to the Archdiocesan Harvey Relief Fund.

“I tried to draw them out of their own experiences of Harvey,” the 84-year-old Archbishop said of meeting with the students. Students and staff of True Cross suffered flooding at their homes, many being rescued by boat after being stranded by high water. He also met with a teacher from Puerto Rico who became emotional as she told the prelate about her struggles about not hearing from her family members on the island.
“Some told me about their struggles and their stories,” he said.

As he evacuated to Baton Rouge during Katrina, his own rectory took on more than six feet of floodwater in 2005. He said he personally knows the experience and feeling of not being able to return home for months on end and the jarring change of life after a storm.
Students from both schools greeted Archbishop Hughes as he made his way from classroom to classroom.

The Archbishop invited the students to sing for him, which they gladly did.
One song that the students sang was a hymn to Our Lady of Fatima, an anthem for students of the Texas City school. Apparently True Cross students quickly learned it and sang the hymn for the Archbishop, who used the song as a teaching moment for the students.

“The song talks about praying on bended knee before Our Lady of Fatima to promote harmony and unity,” he said. “I urged them amidst the challenges they faced to have faith and hope and an assurance that God is with them.”

Archbishop Hughes gave students from True Cross a small cross, and he gave Miraculous Medals to Our Lady of Fatima students.

The Archbishop was even able to give a blessing to a True Cross K3 student who had broken her arm while evacuating during Harvey.

“It’s very meaningful,” having Archbishop Hughes visit, Father Clint Ressler, pastor of St. Mary of the Miraculous Medal, said. “Knowing that there’s a sympathetic heart, who has the compassion from having himself lived through it, knowing that he knows intuitively what we’re going through makes a difference.”

Before visiting the Texas City school, Archbishop Hughes met with other Harvey-stricken survivors across the Archdiocese, including in shelters and from other damaged parishes. He also celebrated Mass with the two schools on Tuesday, Sept. 26.

On Sunday, Sept. 24, Archbishop Hughes also celebrated an 8 a.m. outdoor Mass with the St. Francis of Assisi Catholic Church, a devastated parish in northeast Houston. At least four to five feet of water rushed into the church sanctuary and destroyed much of the church and parochial school. Students were displaced to nearby Resurrection Catholic school. The parish previously flooded during Tropical Storm Allison in 2001.

Under a tent erected with the help of the Knights of Columbus Galveston-Houston Chapter and St. Justin Martyr Council 8293, sounds of clapping, joy and praise during Mass flowed into nearby streets of the Kashmere Garden neighborhood. Archbishop Hughes, the principal celebrant of the Mass, shared his own experiences of Katrina’s devastation.

Katrina was an invitation for him and his city to begin anew, Archbishop Hughes said in his homily.

“We are invited to re-experience His victory that the Lord Jesus has won over powers of darkness and to draw hope in the midst of our present challenges and trials,” the Archbishop said. “He wants to provide His saving grace and the strength to help us move from death to life.”

At the end of the Mass, Supreme Knight Carl Anderson of the Knights of Columbus, who was in attendance, said to the congregation: “It is obvious from the way you worship, your faith is alive.” He then presented Father Martin Eke, MSP, pastor of the St. Francis of Assisi, with a $25,000 check to support the parish. The Knights of Columbus also supported Dickinson’s Father Roach Council 3217, Shrine of the True Cross Catholic Church, the Archdiocesan Harvey Relief Fund and other causes, totaling to $224,000.

“Things like this happen so that we can see God can use us to do,” Father Martin said. “Everything happens for a purpose. Spiritual activities continue and hope is high. We thank God we have these Knights who have come to be with us. We are blessed by this gift.”

Recovery in Galveston-Houston will take years. The Archdiocese is committed to helping parishioners and the greater community get back on their feet through the Archdiocesan Harvey Relief Fund. Donate today.