New Judicial Vicar for Galveston-Houston discusses work of Tribunal, reflects on his ‘yes’ to priesthood 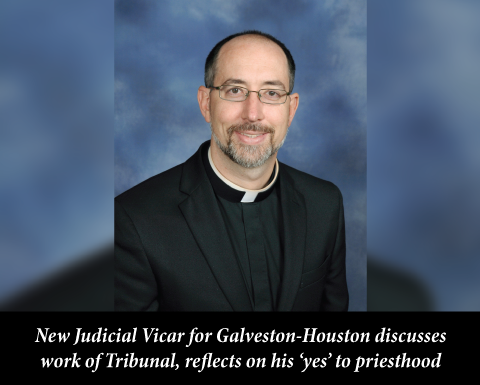 HOUSTON — “God has led me to my present role in the Archdiocese along varied paths,” Father Richard Lucien “Luke” Millette, J.C.L., said.

Among those varied paths was Father Millette’s vocational journey to the priesthood, which the native of Mobile, Alabama describes as “quite straightforward in some ways and quite convoluted in others.”

“As a child, I told my family that I wanted to be a priest, but this was later replaced by the desire to be an engineer and have a family,” he said. “I went to university with this intention in mind, yet throughout my college career my faith continued to be an important part of who I was, and so I continued to struggle with the thought of priesthood during this time.”

After graduating with a degree in mechanical engineering, he accepted a full-time position with BP in Houston thinking that he had put his vocational question to rest. But God continued to call him and he began thinking about entering seminary more seriously after a year of working.

“During that time, I was in the explosion at the BP Refinery at Texas City in 2005,” Father Millette said. “This helped to crystallize my vocation when I realized that I would rather die for Christ than in pursuit of worldly goods. Shortly after this, I entered the discernment process more intentionally, and I was interviewed and accepted to seminary on the one-year anniversary of the explosion.”

Father Millette served as Adjunct Judicial Vicar in the Tribunal the last two years. He succeeds Father Lawrence Jozwiak, J.C.L., the rector of the Co-Cathedral of the Sacred Heart in Houston. Father Jozwiak has been reappointed as a Judge in the Metropolitan Tribunal and will continue to share his expertise in canon law. In addition to his role as Judicial Vicar, Father Millette will also now serve as an Adjunct Professor at St. Mary’s Seminary.

Father Millette recently discussed his new role in the Archdiocese, the work of the Metropolitan Tribunal and saying “yes” to the priesthood with the Texas Catholic Herald.

For those unfamiliar, what does the role of Judicial Vicar entail?
Father Millette (FM): The Judicial Vicar shares the bishop’s judicial power which he exercises vicariously in the name of the bishop. The primary responsibility of the Judicial Vicar is to ensure that truth and justice are observed within the diocese by the correct application of canon law. As part of this responsibility, the Judicial Vicar oversees the functioning of the Tribunal which judges all cases set before it, the majority of which are requests from Catholics seeking a declaration of nullity so that they might marry in the Church.

What are the primary challenges and “success” stories regarding Pope Francis’ Year of Mercy and his changes to the annulment process in 2015?
FM: To my mind, there have been many great successes due to Pope Francis’ intense focus on ministering to those who have been separated from the Church due to their irregular marital status. With the new laws issued by Pope Francis to revamp the matrimonial process, the process has been greatly streamlined and simplified, making the process much quicker for those who seek a declaration of nullity.

Additionally, the recent Year of Mercy as well as the associated Synods on Marriage and the Family encouraged many people who found themselves in these irregular marriage situations to enter into the annulment process. As a result, our Archdiocese, as well as many other dioceses around the world, received a record number of petitions for annulments. This is exciting for all of those involved in this privileged ministry, but it also brings many challenges.

What are some of the plans to address this change of course looking ahead?
FM: The greatest challenge that we will face is meeting this increased number of petitions without further delaying the process. The annulment process was notoriously slow and even with the increased speed of the new process, the greater number of petitions threaten to slow down the process once again.

Our Tribunal, for example, received 200 more cases than we ever had before in the past. While this doesn’t sound like a lot, 200 cases is a full year of work for many Tribunals. In response to this challenge, we are adding several new positions at our Tribunal to meet this growing need. This leads us to another challenge which is not letting the enthusiasm which gathered around this ministry during the Year of Mercy wane.

We have already received several calls from people who were afraid that the process was going to revert back to the more difficult process now that the Year of Mercy is over. It is important that everyone knows that God’s mercy is never exhausted and that the Tribunal is still here to help them as they seek to regularize their marriage status. In order to keep this momentum going, I hope to increase the number of talks and workshops given throughout the Archdiocese about this important ministry.

Is there anything else you would like our readers to know about the work of the Tribunal and the annulment process?
FM: Along with the positive messages about ministry to those Catholics who have been divorced and remarried, there have also been some confusing messages spread by the secular media. It is very important that all Catholics who find themselves in an irregular marriage situation know that they are loved and wanted by their Church. They are not cast out or “second-class citizens.”

At the same time, it is important that they also understand that they are living in a situation that is contrary to Christ’s teaching. For this reason, we encourage them to seek a declaration of nullity so that any future marriage might be recognized by the Church. Although this process can be difficult, the freedom of conscience that it brings is priceless. For this reason, we encourage everyone to speak with their parish priest or Tribunal about beginning a petition for nullity.

We understand, however, that this is not possible for everyone. Some people are not able to petition for a declaration of nullity for various reasons, and others have already petitioned but received a negative response. For those who find themselves in this situation, we ask you to meet with your parish priest so that he might accompany you on this difficult pastoral journey.

Outside of your role at the Tribunal, do you have an opportunity to celebrate Masses and assist with other pastoral or ministerial roles around the Archdiocese?
FM: For at least the past two years or more, I have assisted in various capacities at the St. Joseph-St. Stephen community in Houston. I can be found there for Masses on most Sundays. Additionally, I serve as the chaplain for the Order of Malta in Houston and truly enjoy assisting in their charitable endeavors throughout our city. This semester, I have also begun teaching a class in canon law to the seminarians at St. Mary’s Seminary. So far, that has been a true joy for me, and I look forward to continuing to develop in my role as a professor.

When (and if) your schedule permits, do you have any hobbies or favorite pastimes to pursue?
FM: When it comes to hobbies, my greatest love is the outdoors. I love hiking, boating, biking and climbing as well as running... truthfully any sport outside, so I will get outside as often as I am able. I also have a great love for the arts, so you will often find me at the theater or visiting the art museums. And of course, as with most priests, I enjoy a quiet night reading a book.

Do have you have words of encouragement for those discerning the priesthood or religious life?
FM: Speaking from my experience, I can say that discernment is always a scary process because we do not know what God will do with our “yes.” I always wanted to know exactly what God would do with me before I said “yes,” and then I was struck by the example of Mary who said “yes” without knowing what it would bring and without counting the cost. When I finally said “yes” and entered seminary, I thought that I was giving everything up and in the end, I discovered that God has given back to be more than I ever let go of.

Our God is a generous giver, and we can never give more to Him than He will give back to us in return. I could not have imagined in my wildest dreams the things God would do with me in these first years of my priesthood, and despite the difficulties that I have faced in both my life and vocation, I am always grateful to Him for the great blessings He has brought into my life. I’m glad that He finally made me brave enough to say “yes” to His call.