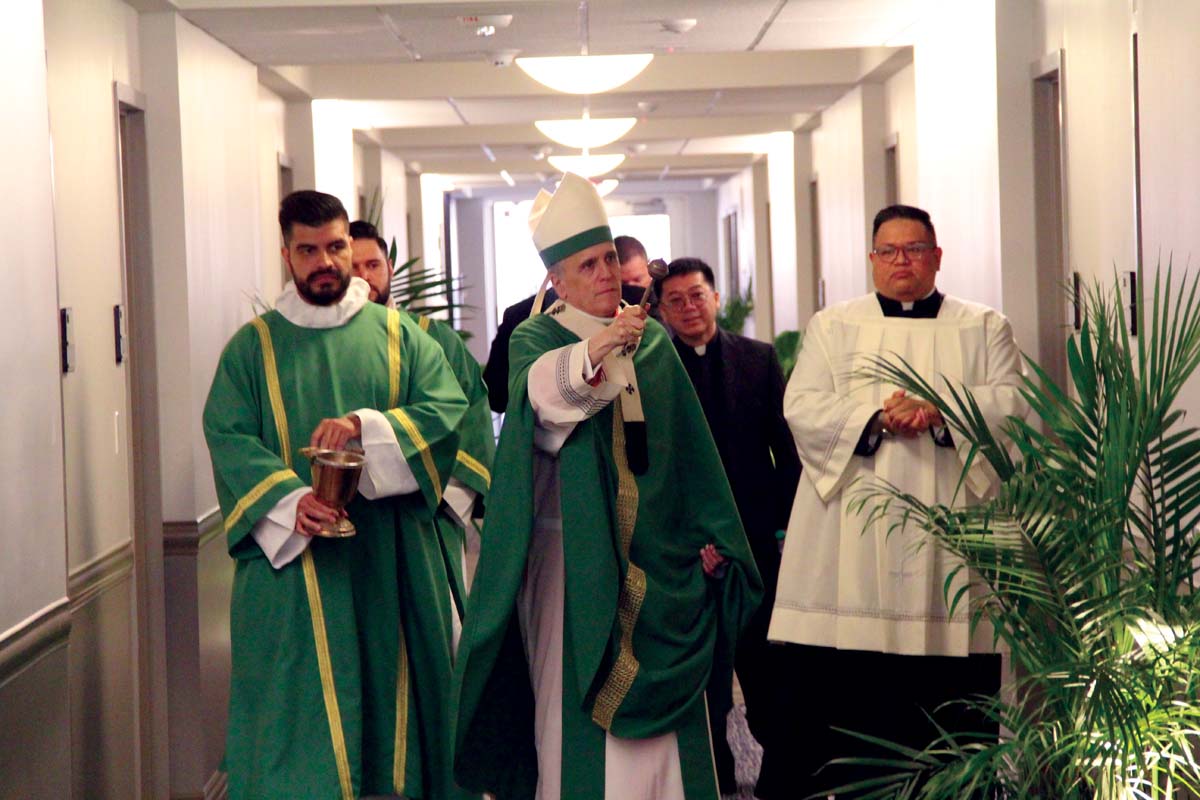 Daniel Cardinal DiNardo blesses the new dormitory at St. Mary’s Seminary in Houston on Sept. 12. The new building was made possible by the generous supporters of the IGNITE: “Our Faith, Our Mission” Capital Campaign. (Photo by Jonah Dycus/Herald)

HOUSTON — Generous supporters of the IGNITE: “Our Faith, Our Mission” Capital Campaign gathered for a dorm blessing held at St. Mary’s Seminary, Sept. 12.
The blessing was held after a Mass celebrating the Rite of Admission to Candidacy for Holy Orders for those preparing for ordination to the diaconate.
Daniel Cardinal DiNardo was the principal celebrant of the Mass and blessing. Among those concelebrating the Mass were Auxiliary Bishop Italo Dell’Oro and retired Auxiliary Bishop George A. Sheltz; Father Eurel Manzano, St. Mary’s Seminary rector; retired Monsignor Chester Borski and Father Trung Nguyen, pastor at Sacred Heart in Manvel, both former rectors at St. Mary’s Seminary; and other priests of the Archdiocese and seminary faculty.
A key element of the IGNITE: “Our Faith, Our Mission” Capital Campaign supports St. Mary’s Seminary, including the construction of the new dorm for seminarians in formation for the priesthood. Last year, a ceremonial beam signing for the new dorm was held to celebrate the milestone event.
“Today is truly a historic occasion, not only for our men currently in formation, but for the men who will follow in the years to come,” Cardinal DiNardo said before the Sept. 12 dorm blessing. “The need for expansion and updating our seminary facilities, in effect, became the ember that sparked the IGNITE campaign and, in doing so, has set us on a path of progress for the future.”
Cardinal DiNardo said the new residence will provide seminarians “a sense of community, a space conducive to prayer, scholarly pursuits, and the resources needed to prepare for ministry in the 21st century. It is our hope also that this growth will position St. Mary’s at the forefront of growth in terms of Vocations within our Archdiocese and beyond.”
The dormitory has 54 seminarian suites and three formation staff suites over three floors, with each floor having a common area.
“I offer my sincere thanks to Studio Red, Axis, the Mossy family, the Scanlan Foundation, the Bridgwaters, the Grants, the Tharps, engineers and all the craftsmen whose dedicated efforts have brought us here today,” Cardinal DiNardo said. “I also thank Father Trung Nguyen in his leadership in starting this project a few years ago when he was the rector of St. Mary’s; and I thank Father Eurel Manzano for seeing the construction project through to its completion.”
For more than 100 years, St. Mary’s Seminary has helped thousands of men answer their call to the priesthood, ultimately enabling these young men to follow in the steps of the first disciples.
St. Mary’s Seminary also serves as home to the Diaconate Formation Program and hosts the University of St. Thomas School of Theology, which serves the seminarians and the greater community at large.
“This has truly been a journey of faith and vision that began long before ground was broken on this spot, with the very founding of St. Mary’s Seminary,” Cardinal DiNardo said. “The vision that our Archdiocese would be a place of solid priestly formation that would one day prepare men to serve in faith communities across nine dioceses and reach countless faithful through the ministry of priests who have been formed and trained here at St. Mary’s Seminary.”
Cardinal DiNardo went on to thank those present for their time and prayers, “and for many of you, your very, very gracious support — you have been instrumental in bringing this dream of creating a spiritual and a physical home for our seminarians to fruition, and on behalf of a grateful Archdiocese — I want to say thank you all.”
IGNITE was launched in 2015 to address the needs of the seminary, as well as the Catholic schools, individual parish needs and faith formation. The campaign also added a future disaster recovery fund and a fund to address rebuilding parishes and schools in light of Hurricane Harvey.
As part of the campaign, 33% of the funds collected from a parish are returned to that parish on a quarterly basis to be used toward specific church needs, including technology upgrades, beautification and repairs.
To learn more about the IGNITE: “Our Faith, Our Mission” Capital Campaign, visit the website online at www.archgh.org/IGNITE. †