New auxiliary bishop has deep ties with Hispanics in the Archdiocese 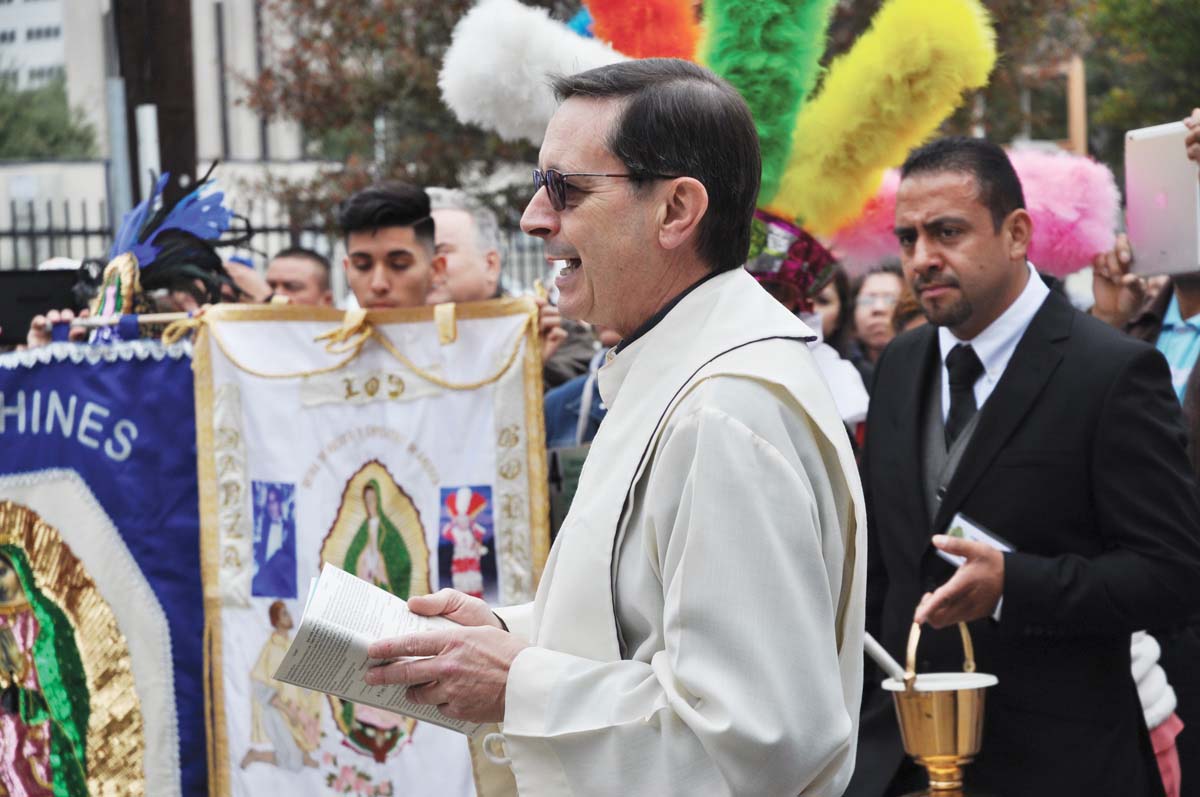 HOUSTON — Bishop-Elect Italo Dell’Oro, CRS, has been very involved with the Hispanic Catholic faithful of the Archdiocese throughout his priestly ministry.

Archbishop Emeritus Joseph A. Fiorenza remembers inviting the Somascan Fathers more than 30 years ago, including Bishop-Elect Italo Dell’Oro, then a young priest, to Houston “to work among the Spanish-speaking community.”

In July 1992, then-Father Dell’Oro was assigned by his Somascan superiors to become the pastor of Assumption Church in Houston.

“Since that appointment, I have known Father Dell’Oro very well and came to greatly admire him and have high respect for his pastoral ministry,” Archbishop Fiorenza said.

“In every aspect of priestly ministry and conduct, Father Dell’Oro has been an example to brother priests, as well as his availability to administer the Sacrament of Penance and the Eucharist when asked to celebrate these and other Sacraments,” he said.

“I certainly let the Vatican know that I was very happy that they chose him as an auxiliary bishop,” Archbishop Fiorenza said.

Bishop Joe S. Vásquez, who was installed as the fifth bishop of the Diocese of Austin on March 8, 2010, said he worked with the bishop-elect during his time as auxiliary bishop of the Archdiocese of Galveston-Houston. They worked together in ministries to youth, young adults and Hispanics.

“I’ve always appreciated Father Italo’s integrity as a priest and his desire to provide good and solid formation to young people and priests,” Bishop Vasquez said. “Father Italo’s Spanish is impeccable, which allows him to effectively communicate and minister to the always growing Hispanic population in the Archdiocese. Bishop-Elect Italo will bring many gifts and blessings to the faithful of the Archdiocese of Galveston-Houston.”

Lázaro Contreras, director of the Office of Hispanic Ministry for the Archdiocese, said Bishop-Elect Dell’Oro’s charism of his congregation, the Somascan Fathers, is to serve the orphans and the youth.

Due to his fluency in Spanish, he served the Hispanic youth of the Archdiocese in Encuentros de Promoción Juvenil as the spiritual director and also as vocation director for his congregation.

Contreras said that, as vocation director of the Somascan Fathers, Bishop-Elect Dell’Oro accompanied young men in the discernment of their vocation. “At that time, I was working for the Office of Vocations, and Father Italo was regularly present at vocation gatherings and retreats interacting with the discerners,” he said. “Since he spoke both English and Spanish, he would participate in both the English and Spanish retreats.”

Contreras said, more recently, Bishop-Elect Dell’Oro has been very involved with the Hispanic Latino faithful of this Archdiocese due to his participation in the V Encuentro process.

Bishop-Elect Dell’Oro participated in the Archdiocesan, regional and national Encuentros that took place since 2016. He was part of the core team leading the entire process locally, which also included his participation in the national in-service and the training of trainers and clergy orientation day for the implementation of the conclusions of the V Encuentro.

“His role has been vital in fostering a culture of encounter in the local Archdiocese,” Contreras said. “Because of his previous roles and his current role as vicar for clergy, he knows and understands the needs of the People of God and of his brother priests. He is a person that represents unity among all the members of the Body of Christ.”

“Father Italo lead the procession in several consecutive years. He would stand at the beginning of the procession and gather the matachines (dancers) and people around and gave a message of hope in Our Lady of Guadalupe,” Contreras said. Bishop-Elect Dell’Oro also participated in this celebration as the homilist.

The new bishop, while still a priest, accompanied the Hispanic young adults when he was the spiritual director for the international lay group Encuentros de Promoción Juvenil. He celebrated Mass for them in the annual retreats and nights of prayer.

Contreras said he visited them in their weekly meetings, formation and special events.

“I recall one occasion when I was part of this group as a young adult, and we participated in a prolife activity with the prayer of the Rosary outside of a clinic that performed abortions,” he said. “This was in downtown Houston, and the Mass was in Holy Rosary Church. Father Italo was the celebrant. I was very impressed with the different languages he spoke in the opening greeting. He addressed the faithful in Italian, English and Spanish.”

Contreras said that when some parish leaders in the Hispanic Ministry learned that Father Italo was named auxiliary bishop for the Archdiocese, they rejoiced.

“Father Dell’Oro is like one of our own in this Archdiocese despite that he is a religious priest who is constantly on the move to new mission assignments and that he was from Italy,” he said. “He has spent more than a few decades locally, and people love him. He has been there with the people, and as vicar for clergy, he has been there for his brother priests as well.”

Contreras recalled that on one occasion when he was visiting him in his office due to their work together in the V Encuentro, he was looking at the Somascan priest’s ordination photo and when he visited then-Pope John Paul II in Rome and “he shared with me how he felt called to minister to his brother priests.”

With the upcoming ordination, Contreras said there is an understanding that he will be ordained “for all the people of God in the Archdiocese.”

“I think his connection and accompaniment to Hispanic Catholics will continue as when he was a priest,” he said. “Hispanic Catholics have a great regard and respect for Father Italo. His relationship with all the faithful of our local Church will grow and be strengthened since as a bishop he will have more opportunities to visit the different parishes and groups throughout the Archdiocese.”

Contreras said he was speechless, grateful and astounded when he learned of the appointment.

“Throughout the years, when there were conversations between other employees or volunteers about who from our diocese could be the next bishop, his name was always mentioned. It’s like if we always knew,” he said. “His pastoral approach, humbleness and love for his ministerial priesthood are those qualities that stand out and that I admire about him. He will be a great bishop for all the faithful of this local Church. We feel very blessed to have him as a bishop!”

The Metropolitan Organization (TMO), an organization of institutions dedicated to developing power and leadership among citizens in order to transform the city, praised the bishop-elect’s efforts with the Hispanic community.

“Bishop-Elect Dell’Oro understood the importance of the 2020 Census and encouraged the faithful across the Archdiocese to complete it,” said TMO’s Ana Guerrero Cummings. “He opened the door with clergy for TMO leaders and organizers to educate and encourage people in 25 parishes to complete the Census. He made a big difference in promoting the Census in a very challenging year.”

The bishop-elect created a PSA video in Spanish explaining the importance, safety and confidentiality of the 2020 Census. He encouraged everyone to participate so all communities would be fairly represented by elected officials and funding properly allocated to our communities to meet the real needs of communities.

“Bishop-Elect Dell‘Oro has a passion for inviting and including immigrants and those on the margins into the full life of our parishes and community,” TMO Organizer Joe Higgs said. “He has a warm and welcoming heart that inspires people to love and have confidence in the Church and their own ability to take action on behalf of their family and community.”

The Bishop-Elect’s involvement with TMO began when he became pastor of Assumption Church in 1992. He developed a team of both English- and Spanish-speaking leaders to work together for the parish.

Bishop-Elect Dell’Oro was also actively working with TMO to organize non-partisan Candidate Accountability Sessions where candidates running for office were presented with the TMO agenda of issues. He wanted people to know what was going on and to be informed about issues as they prepared to vote.

“My husband George Zuckero and I were leaders with TMO at the time and together with Bishop-Elect Italo, we worked to build up a diverse team of leaders at Assumption,” said TMO’s Damiana Zuckero, Assumption Catholic Church. “He is a perfect choice for bishop. He is a wonderful and holy priest.”

Zuckero said the new bishop is very open-minded and encompasses everything the Catholic Church stands for.

“He has a lot of hope for the Church. I’m sure he will reach out to everyone as he does now, but even more so,” she said. “He will go on and do great things for the Archdiocese.” †