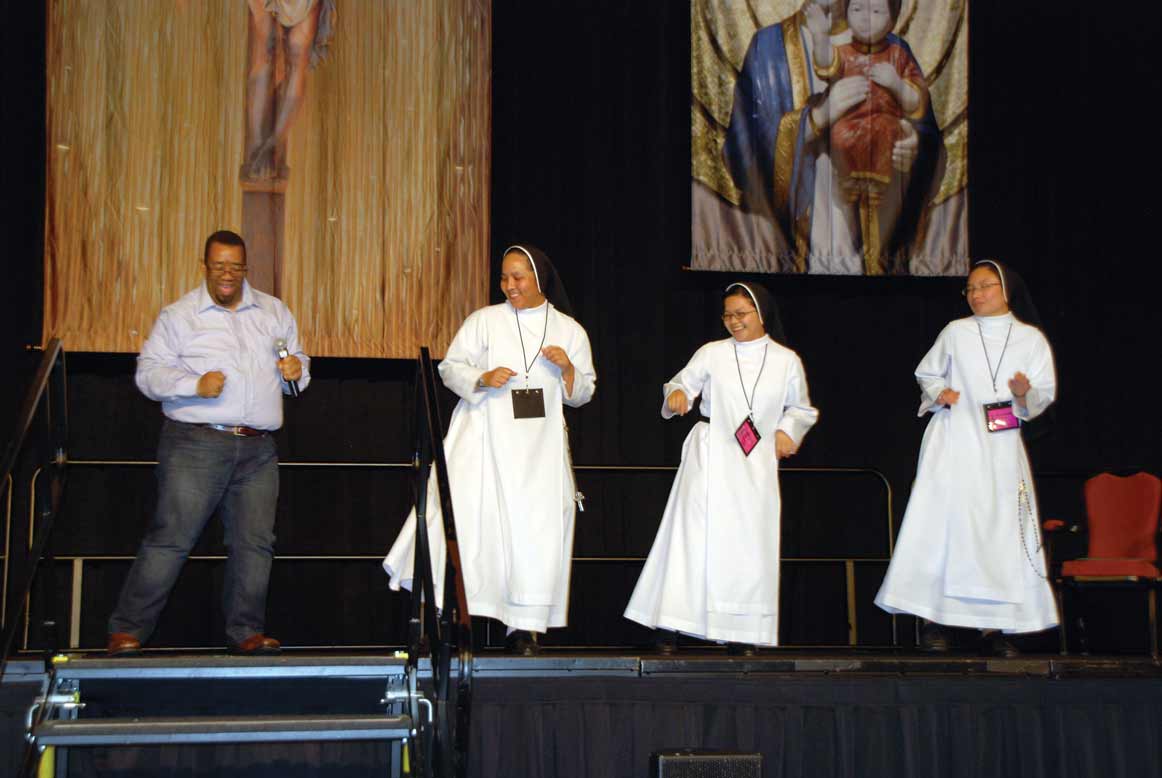 Brian Johnson, seen here dancing with three Dominican Sisters of Mary Immaculate Province during the 2012 Archdiocesan Youth Conference, will be remembered for his charisma, authenticity and his jovial sense of humor as the director of the Archdiocesan Office of Adolescent Catechesis and Evangelization. Herald File Photo by Rebecca Torrellas.

HOUSTON — Brian Johnson, a national leader in youth ministry and director of the Archdiocesan Office of Adolescent Catechesis and Evangelization (OACE) was remembered by Catholics both in Houston and in his native Baltimore for his larger-than-life personality, his effective engagement with youth, and his impact on youth ministry at the national level.

Johnson died unexpectedly at Methodist Hospital in Houston June 19. He was 52.

A June 28 memorial funeral liturgy was celebrated for Johnson at the Co-Cathedral of the Sacred Heart. Afterward, his body was transported to Baltimore where a July 1 funeral Mass was celebrated at St. Matthew Catholic Church, followed by burial in Dulaney Valley Memorial Gardens.

A dedication was also held at the Conference of Catholic Bishops’ Convocation for Catholic Leaders in Orlando, Florida, where Johnson was scheduled to be a speaker.

Throughout his nearly three decades in youth ministry, Johnson’s spirit, determination and commitment touched and influenced the lives of countless young people. He began his ministry at his own parish, St. Cecilia Catholic Church in West Baltimore, where he became a youth minister.

He was also the youth minister at nearby St. Gregory the Great Catholic Church. In addition to his work at St. Cecilia and St. Gregory, Johnson became involved with archdiocesan-wide programs, such as the High School Leadership Initiative, or High-Li, which he had participated in as a youth and returned to help staff as a youth minister. He also started participating in national workshops and conferences on youth ministry.

He embraced Houston life, especially in sports as an avid Rockets fan with third row season tickets. He was also judge for the selection of the Rocket PowerDancers.

He would later become the director of OACE. During this time, Johnson helped revolutionize the summer Archdiocesan Youth Conference (for high school teens) into one of the largest annual assemblies of its kind. Johnson was also a key contributor in the creation of a Catechetical Framework for Lifelong Faith Formation, the tool by which catechesis is organized and structured in the Archdiocese.

In the last chapter of his life, Johnson dedicated himself to the renovations and expansion of Camp Kappe. He was passionate about transforming the campus into a space that would meet the needs of our youth for many years to come.

Daniel Cardinal DiNardo said Johnson was “an inspiration to the youth of our Archdiocese.”

“He had a profound impact on not only the young people he served and their families, but also on the formation of youth ministry leaders,” he said. “The Archdiocese is very grateful for his service to the local Church. He will be truly missed.”

Father Nicolas Ramirez, parochial vicar at St. Bartholomew the Apostle Catholic Church in Katy, met and got to know Johnson when he was still in high school 16 years ago.

“Something that was very evident from the moment I met Brian was his authenticity,” Father Ramirez said. “He was real. There was no denying Brian’s authentic realness when you encountered him. He had a very jovial and eccentric sense of humor, but I think also reflected very much the people who he was serving; the mission that he was given to accomplish.”

Libby Diamond, the new Youth Council Chair, said she met Johnson when she arrived at Camp Kappe for the first time. She had just been nominated to be part of the youth council and going into the first retreat. Johnson was the first person to welcome her.

“Throughout that first weekend, I continued to notice the impact that Brian’s charisma had on the youth council as a whole. I realized that I became part of a family in those three short days, and I believe that this family-like atmosphere was largely due to the way he interacted with all of us — always joking around and, of course, taking great care to make sure everyone had a nickname,” she said. “I knew that I wanted to be part of the youth council because I felt so much part of this family in just that one weekend.”

Diamond said that Johnson taught her that leadership is about creating a community of trust in which everyone feels they have a place and knows they are supported in all the work they do.

“As I continue to serve as council chairperson this year, it is so important to me to ensure that the sense of community Brian created within the youth council is never lost,” she said. “The lasting impact he leaves on me and so many others is the knowledge of our call to be leaders who reveal God’s love to the world through the relationships they form with those they serve.”

Diamond said that, in addition to his devotion to building community, something else about Johnson that she feels made an impact on the youth of the Archdiocese was his vulnerability and willingness to be himself with them.

“Society tells us teenagers that anything but ourselves is good enough, but Brian’s life argued otherwise,” she said. “Whether it was showing us hilarious pictures of himself or just saying whatever he felt needed to be said, he showed us that God wants us to be exactly who He made us to be. By being authentically himself, he unconsciously gave us permission to do the same. I think that’s exactly what the youth of our diocese needed to hear from such a well-respected leader as Brian.”

Randy Adams, associate director for OACE, met Johnson in 1992 and joined his team in 2002. He said Johnson had a way of making people feel valued.

“As a supervisor, he truly believed in allowing his associates to take the lead on the programs they were responsible for,” he said. “He was always there to lead, advise, mentor and to provide vision and oversight as the director. He also wasn’t afraid to make the tough decisions. I was most impressed by his willingness to serve as a part of the program team. Even though his title was director, he wasn’t afraid to follow whoever was the lead’s directions. That is the mark of a true servant leader and he would model that approach to staff and youth alike.”

Adams said Johnson’s devotion to the youth, especially the Archdiocesan Youth Council and Camp Kappe Retreat Facility are two of his greatest legacies. He empowered the youth by making sure their voice would be heard and incorporated their ideas and perspectives in all aspects of the Archdiocesan office and its programs by challenging them to use their leadership skills and gifts to assist in the creation and implementation of the ministry programs as peer ministers as well as in their own parishes.

“He always showed the youth great respect. He felt it was important to speak with them and not at them,” Adams said. “Brian’s goal was always to help youth realize that they matter in the Church today. That is what made him such a great catechist; wanting young people to not just know their faith but be able to articulate and live it everyday, to be true disciples of Christ! He also wanted them to have a place of their own for retreats and spiritual growth. That is why the renovations and building program at Camp Kappe was so important to him.”

Dunn Estacio, associate director for OACE, said his first impression working for Johnson was how much of an advocate he was for youth ministry leaders.

“He always sought to support, pray and defend the catechists, volunteers and all those that served the young Church of Galveston-Houston,” he said. “Youth, and people in general, gravitated towards Brian for many reasons. For example, people were attracted to his passion for the young Church and his sense of humor.” Estacio wanted people to know that Johnson was a tireless advocate for all things that pertained to the young Church — volunteers, youth ministry leaders and most especially the young people.

“What gave him life was knowing the young Church was being evangelized and catechized according to the desires and wishes of the Cardinal,” he said. “Brian’s prayer was to see the young Church knowing, loving and serving our Lord!”

Johnson’s younger sister, Renita Woodus, a parishioner of St. Cecilia, said her brother was heavily involved with Harambee, a ministry for African-American youth that emphasizes connection with heritage and spirituality, and cultivates leadership qualities.

Woodus said she and her brother had “typical sibling rivalry” growing up, “but when it was all said and done, Brian was all about family.”

“He looked out for me to this day,” she added.

Besides his sister Renita, Johnson is survived by his mother Jacqueline and two other sisters Fran and Ramona. He was preceded in death by his father, Frank, in 2013. †